Nick's Blog » It’s All Over

Yesterday was the last full day of the Arizona Gypsy Journal rally, and after coffee and donuts this morning, everybody will be pulling out and hitting the road. Some will be staying in nearby RV parks, others will be heading back to their home bases in different parts of the country, and others will be heading off in search of new adventures wherever their wheels take them.

It may have been the last full day of the rally yesterday, but there was a lot going on. We had a full schedule of seminars, attendees were making last-minute purchases from the vendors, and people were gathering in groups to visit with the friends they made or met up with here at the rally.

Paul and Doris Cunningham from RV Weigh Portable Scales came by to weigh our Winnebago Ultimate Advantage. They use excellent quality scales and weigh the RVs in place. I only had to move a few inches to drive on the scales and then back off once the weighing was done. 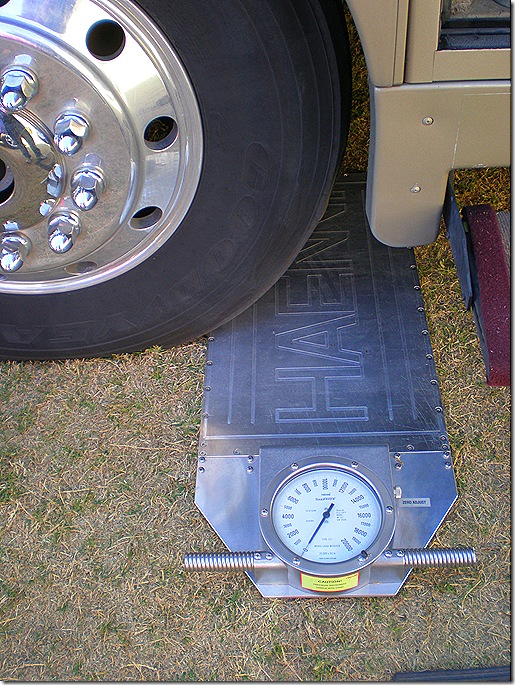 Then Doris and Paul went over the computerized weighing report with me to show me our motorhome’s weight status. As it turns out we are quite a bit overweight on the right rear axle and to a lesser extent on the left front. Paul made some suggestions on how we could shift things around in the front of the motorhome to balance things out. The problem with the rear end isn’t going to be as easy to resolve, and I’m not sure we can resolve it completely. Our basement air conditioner and house and coach batteries are all back there in the right rear of the Winnebago. Obviously, we can’t redesign the entire coach to better distribute these heavy items. Overall, Winnebago builds an excellent motorhome, but in this case they could’ve done a lot better in their design when it comes to locating heavy components. 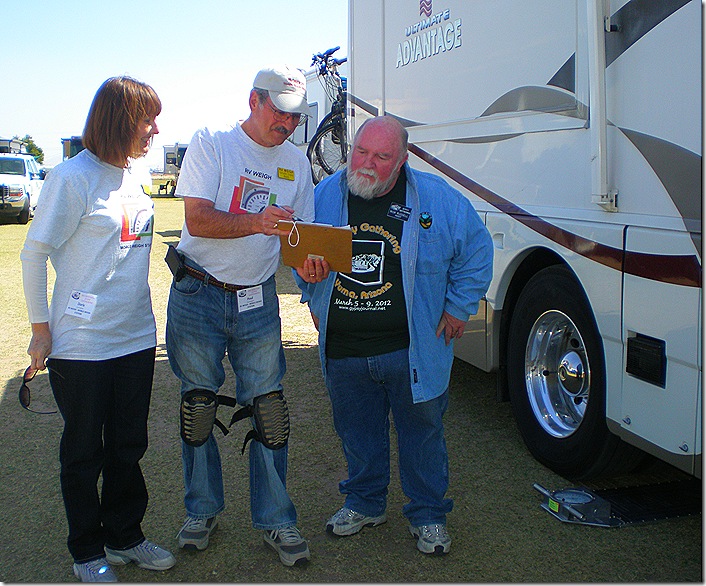 In Tuesday’s blog I told you about the Don’t Tread On Me flag that Frank and Gloria King brought to the rally to be signed by our attendees. The flag will be included in a care package going to a military unit serving in Afghanistan. Here is the flag on the day they brought it in, and here it is after a lot of the people here signed it with messages of appreciation and respect for our troops. 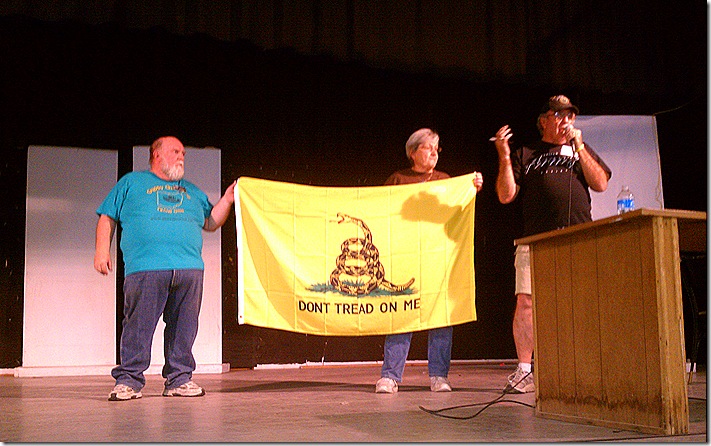 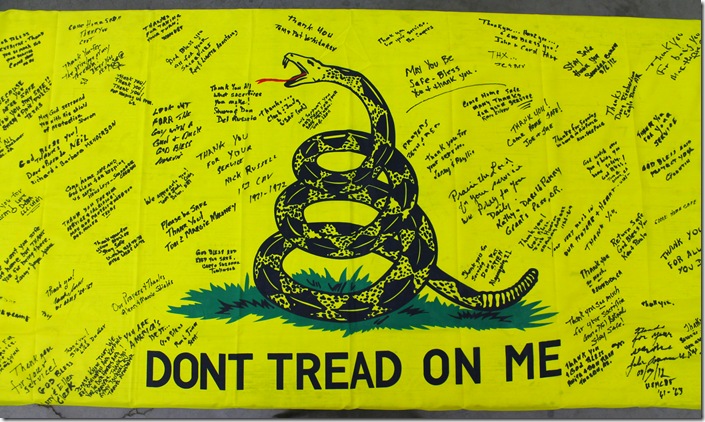 Everybody was waiting for our door prizes, and we had a full house when I started drawing names yesterday evening. We have a lot of neat door prizes to give away, and while the people appreciated them, I knew that everybody was waiting for our two big grand prizes, an Amazon Kindle e-book reader and a Sea Eagle inflatable kayak from our friends Kim and Crystal Ryerson at Inflatable Boats 4 Less.

One of our vendors, Judy Jenkins, was the lucky winner of the Amazon Kindle. As you can see by the look on Judy’s face she was thrilled! It was really funny, we have volunteers draw the winning tickets for us, and Judy’s young daughter Jesse was the one who drew her mother’s winning ticket out of the pot. How cool is that? 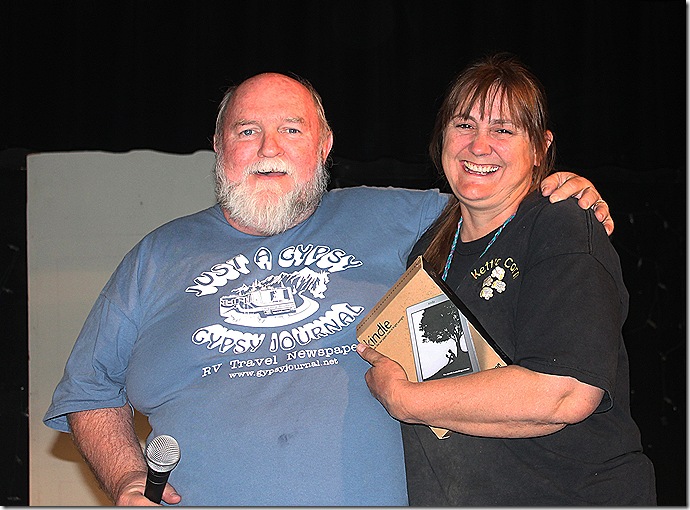 Dave and Lois Kropp from Arvada, Colorado were the winners of the Sea Eagle kayak. That sure made the trip to Yuma worth their while! 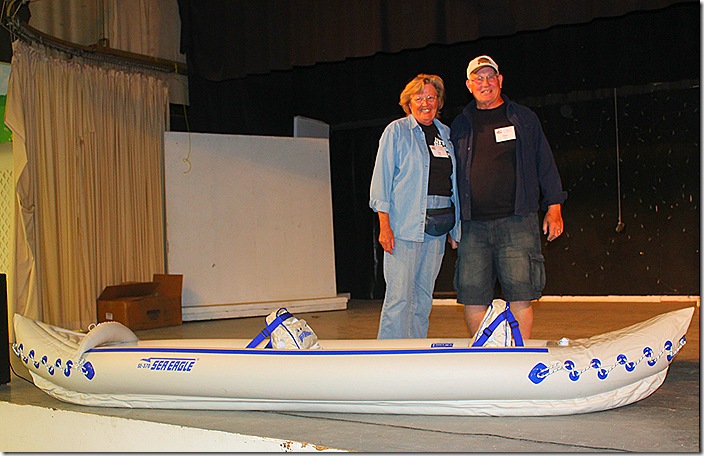 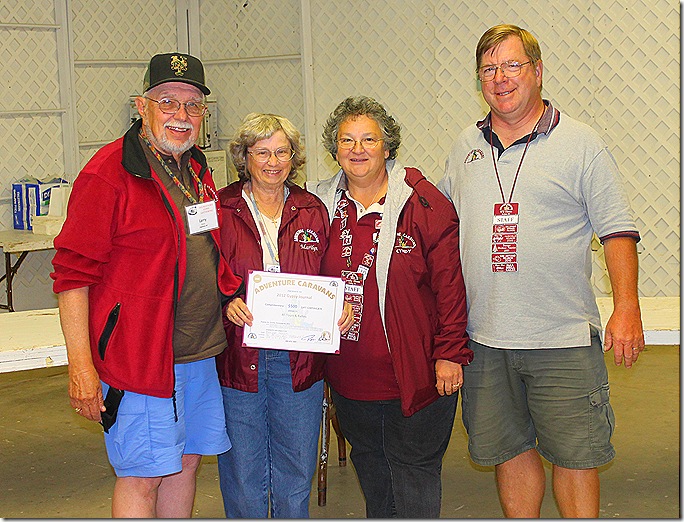 Usually we stay here on the fairgrounds for a couple of days after the rally, getting caught up on our paperwork and all the other chores that get neglected during rally week, and getting some much-needed rest because we are exhausted. However, there is a horse show coming in right on our heels, and we have to be gone by the end of the day today. So it will be a mad rush to get everybody gone after morning coffee and donuts, get the buildings cleaned out, settle our bill with the fairgrounds, and then pull out. Fortunately we’re only going a few miles to the Foothills area of Yuma, where we will be spending the night at Daryl and Cheri Lawrence’s lot.

We have to be in Tucson early next week for a series of medical appointments, so we won’t be hanging around long. I’m looking forward to our time in Tucson; besides the medical stuff we have to get out of the way, we’ll get to spend some time with my cousin Beverly, and we are going to make a very serious effort to get some rest. We really need it.

Thought For The Day – History teaches us that men and nations behave wisely once they have exhausted all other alternatives – Abba Eban.

6 Responses to “It’s All Over”