There’s nothing I love to see more in the world than Miss Terry’s smile. Even after all of these years together it melts me every time I see it. And I sure got to see it yesterday!

Terry loves working with fibers; yarn, wool, silk, you name it and she loves it. She’s a very tactile person and she says it gives her soul comfort when she’s crocheting or working on a project. There’s not much she asks for in this life, so when she shows an interest in something I try to make sure it happens. One thing she has always wanted was a spinning wheel, but space is always an issue when living fulltime in an RV. Well, yesterday we found a solution!

We stopped at a neat place called The Fiber Factory in Old Town Mesa, and they had several models of spinning wheels on display. I could see Terry’s eyes light up when she saw them, and as it turned out, one was a Lendrum double treadle fold-up model. Terry was hesitant to try it, but I kept urging her to see how it felt. The nice lady at the shop set it up with some wool and showed her how it worked.

Then it was Terry’s turn, and you can see by the smile on her face how much she liked it. So guess what we brought home with us? It is a good entry-level wheel that can transition as her skills grow. It’s very good quality, and the head comes off and it folds up, taking very little room. Now the poor lady just needs the time to work with it, which won’t happen until after we get the new issue mailed out and the Yuma rally behind us. 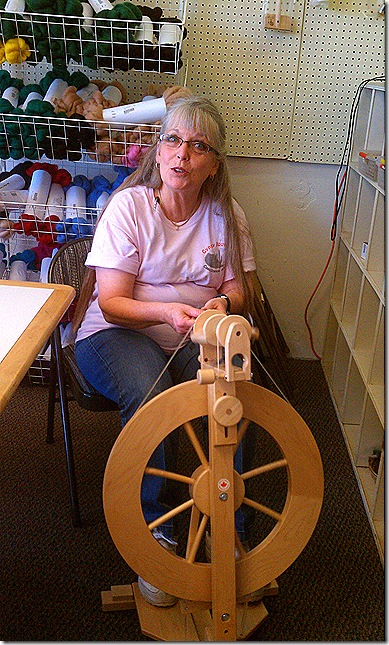 I got some good news yesterday; the VA hospital in Tucson called and they were able to find an appointment time for me with my primary care provider on the afternoon of March 14. I already have to be there the same day for another appointment, so this works out very well. Originally they told me the soonest I could get in would be April 30, which would really mess up our schedule. Especially if I need any follow-up appointments for anything. That could have dragged out and found us stuck here in the desert into the summer, when it gets really hot. We’d very much like to be far away by then.

Today is our last day here in east Mesa, so last night Terry’s mom and dad had us over for dinner. Bess and Terry put together a delicious meal of roast beef and mashed potatoes and all the goodies. It was wonderful, as was having some time with her folks before we leave for Yuma.

We have some chores to wrap up today, things we had hoped to get done before, that got put on the back burner when we both got sick. For people who don’t punch a time clock, we sure never seem to have enough hours to get all of the things done that we want to.

We’re really looking forward to getting to Yuma, and a lot of people who will be at the rally are there already, hanging out in the foothills or at the RV parks around town. Several want us to touch base with them when we get to town, and though we’ll be busy, we will do our best to see everybody we can. If I play it right, I might be able to squeeze a few free meals in before the rally starts.

Thought For The Day – You were born an original don’t live or die a copy.