We crossed something off our bucket list yesterday, and made memories that will stay with us forever! For years we have wanted to paddle our kayaks at Three Sister Springs in Crystal River. Every year, manatee come into the river and hang out in the warmer water from mid-November until late March.

We launched our Sea Eagle kayaks from the marina at Pete’s Pier, and paddled about 1/4 mile to the entrance to the channel that led us back to the Springs. There was a pretty stiff wind blowing in King’s Bay, and we had to work hard to get across the open water to the channel. Once we turned into the channel, we were more sheltered and it was a little easier paddling.

We had only gone a few hundred feet down the channel before we saw our first manatee. It passed directly under my PaddleSki, and to be honest I was apprehensive, wondering what would happen if it surfaced directly under my boat. By the second or third time it happened, there was no worry, only delight at seeing these magnificent animals so close.

When we got back to the entrance to the springs, it was crowded with tour boats, and the water was full of kayakers and people using snorkels. There was a roped off area with a large number of manatee lounging about in the incredibly clear water. But they weren’t just hiding in the roped off area, they were everywhere! These huge, gentle animals seem to crave human contact. We saw several people petting them as they swam by, and some of the manatees just stayed motionless, seeming to enjoy the contact. 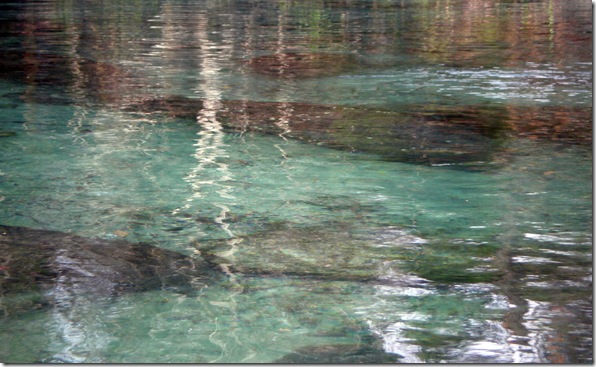 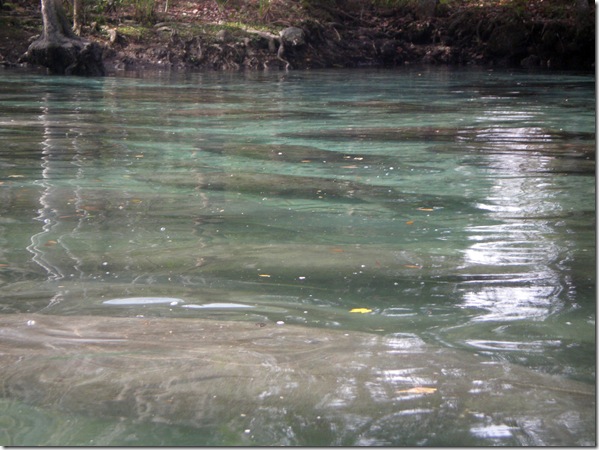 Another Sea Eagle owner had told us that the manatee seem to be attracted to the inflatable boats. She said she believed it was because they are gray and almost shaped like the manatee themselves, with their large air chambers. I wasn’t sure about that until it actually happened to us! Several times manatee would swim right up to our boats, and a few would rub against the side, or pass underneath and rub their backs, almost like a cat will rub against your leg. Every time, they were very gentle and didn’t even rock our boats. 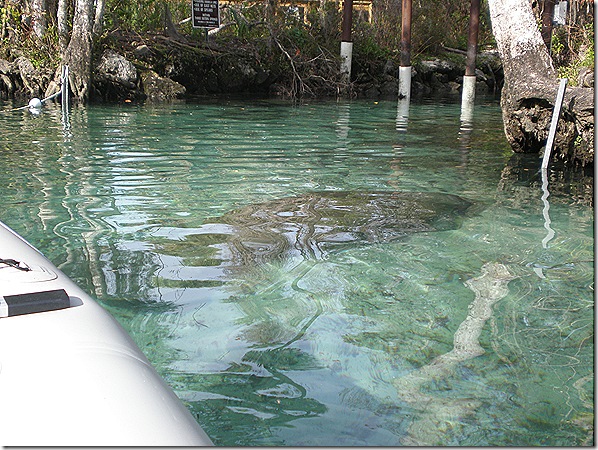 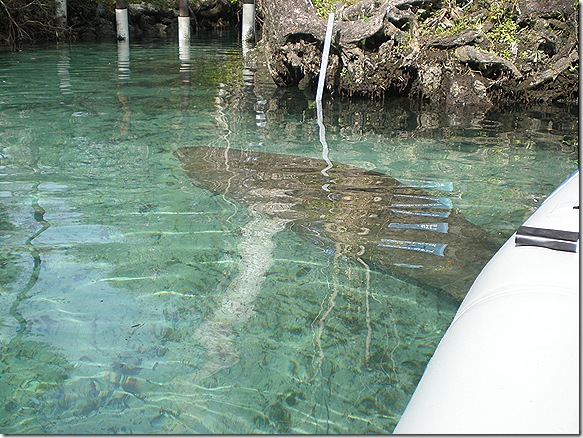 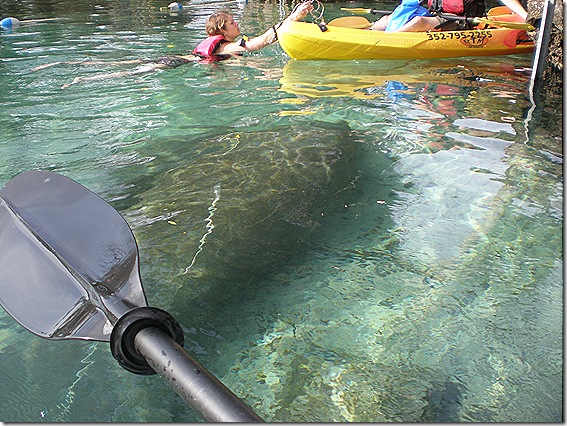 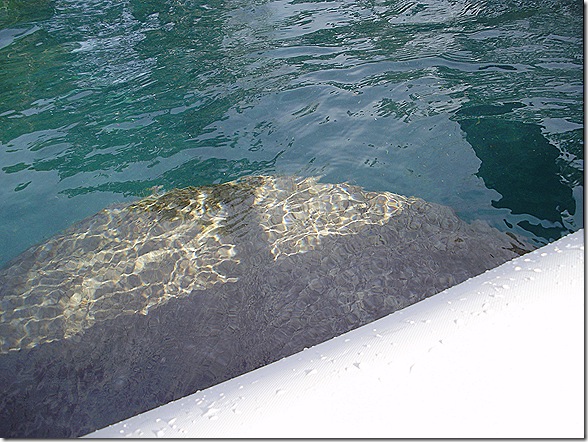 Barriers are erected to the entrance of the deeper springs, to prevent powerboats from going back and disturbing the manatee. It was a tight fit for Miss Terry’s FastTrack 385, but she managed to get through and paddle back to the springs, where the water was crystal clear and she could see all the way to the bottom. Unfortunately, my PaddleSki 435 was a little too wide to fit through the barrier. So I contented myself with hanging out at the entrance of the springs, where there were plenty of manatee and a lot of activity to keep me occupied. 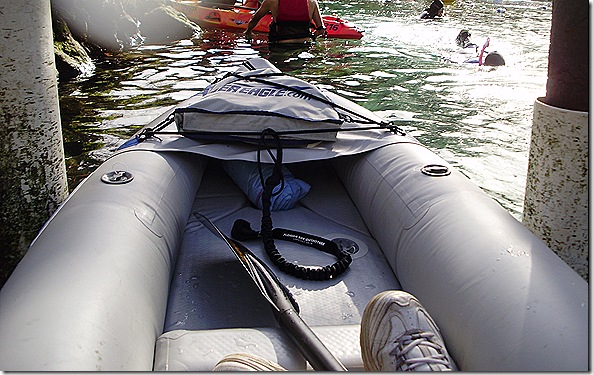 Terry said the water inside the springs was incredibly clear. 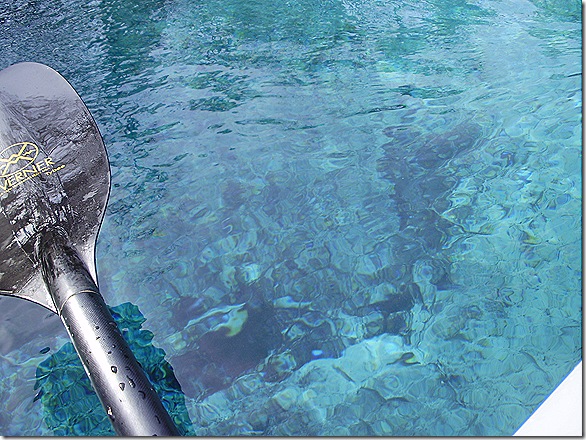 There were two volunteers on hand to make sure nobody molested the animals by doing something stupid like crawling upon them, feeding them, or anything else that would cause them harm. I talked to the volunteers for a while, and commented on how busy it was for a weekday. One of them said “You should have been here the week between Christmas and New Year’s. It was a zoo! There were so many people that you could almost walk across them to shore and never get wet.” I’m glad we missed that circus! 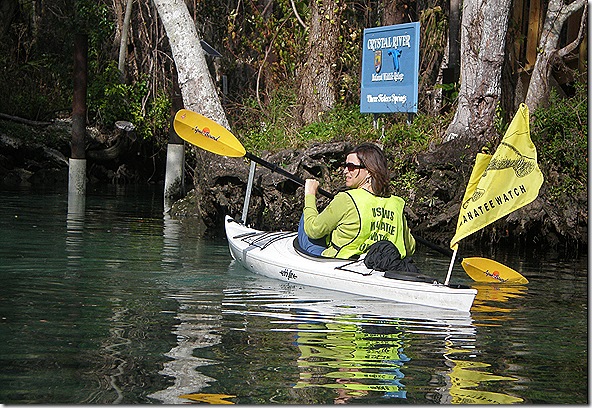 Can you tell Terry is having a good time? 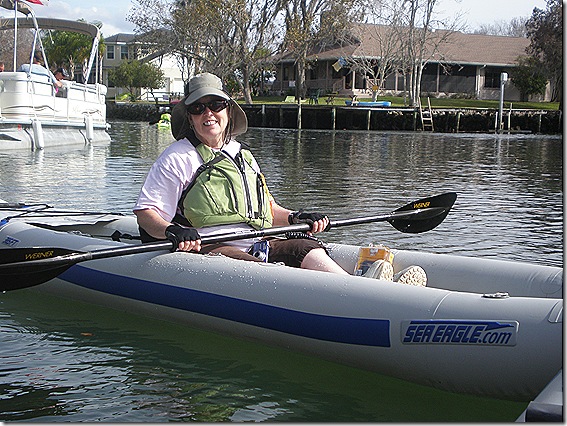 We spent about three hours at the springs, seeing everything from huge old cows with scars across their backs from boat propellers, to babies nursing from their mothers. One of the volunteers said this baby is an orphan, and they’re watching it. Sometimes one of the cows will adopt an orphan and allow it to nurse. If that doesn’t happen, authorities will remove it to a refuge where it will be cared for until it can go out on its own.

On our return trip to the marina the wind had really picked up, and while there were no whitecaps on the water of the bay, it was pretty close, and we got quite a bumpy ride! Terry was very impressed with how her kayak tracked, even with the wind and choppy water. By the time we got back to the marina and pulled our boats out of the water, got them wiped down and deflated, then packed away, we were pretty worn out! But it was worth it to have memories like this.

Thought For The Day – When you stop chasing the wrong things, you give the right things a chance to catch you.

12 Responses to “Manatee Of Crystal River”