By yesterday morning the bad weather had moved on, leaving us with partly cloudy skies, and the wind had pretty much abated. Blog readers to the east of us e-mailed to thank me for the wind and rain that was now descending on them. I’m not too sure they were all that sincere in their gratitude. 🙂

At 11 A.M., we met our new friends Rudy Legett and his wife Carolyn for lunch at a very nice restaurant called the Monument Inn, which sits on the Houston Ship Channel near the San Jacinto Monument, which celebrates Sam Houston’s army’s victory over the Mexican army that won Texas its independence.

This is an important place in Texas history and even the massive oil storage tanks sport murals honoring the battle and the patriots who fought here. 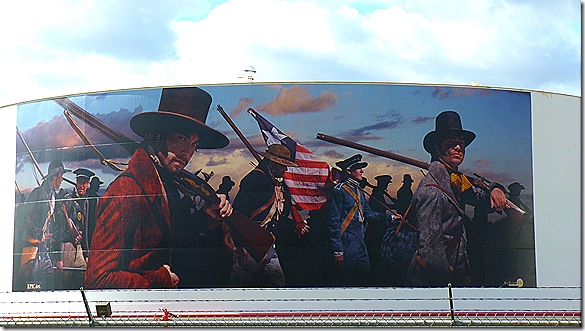 We had a wonderful lunch and lots of good conversation with Rudy, Carolyn, Greg and Jan. Rudy is a factory authorized Aqua–Hot mobile service technician, so if you are ever in the Houston area and need service on your Aqua-Hot system, he’s the man to call.

Everything on the menu at the Monument Inn is remarkable. I had the blackened shrimp, which was delicious, and Miss Terry had blackened tilapia with New Orleans style crawfish etoufee sauce. Our meals also included some sinfully delicious cinnamon rolls that were almost as good as Terry’s, but not quite. But that didn’t stop me from eating two of them!

The upper level dining room has large windows on two sides, allowing views of all the maritime traffic passing by. It was a busy day and we saw tankers and cargo ships, barges, and all manner of support vessels going by during our meal. 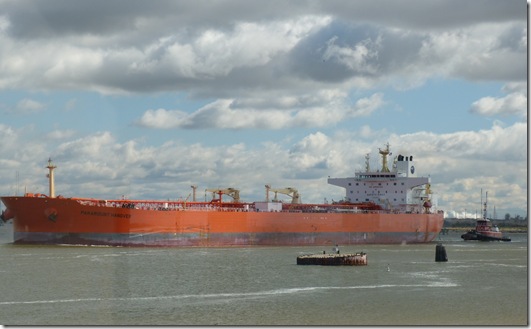 There was also a free ferry carrying cars across the ship channel. The original Lynchburg Ferry was established here in 1822, and Harris County took over the ferry operation in 1888 and has continued service ever since. 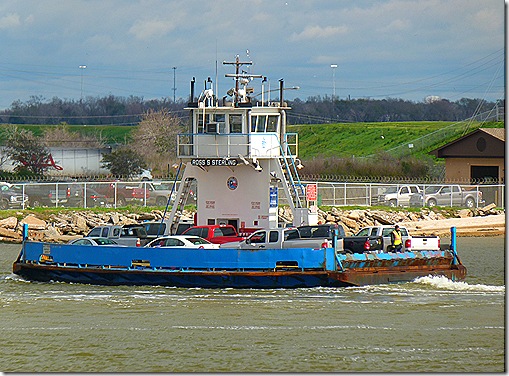 In April, 1836, just days before the Battle of San Jacinto, thousands of Texans rushed to the San Jacinto River to escape the advancing Mexican army. Doctor Pleasant W. Rose and his family camped here for three days amongst over 5,000 panic stricken people waiting to cross. This mass of people had retreated along with Houston’s army from Gonzales after the fall of the Alamo, in a mad dash that became known as the Runaway Scrape. Knowing they faced certain death at the hands of the Mexican army, soldiers and citizens alike grabbed whatever they could and ran for their lives.

After lunch we stopped to check out the San Jacinto Monument, which looks very much like the Washington Monument except for the star on top, and the fact that is bigger. Of course, everything is bigger in Texas! 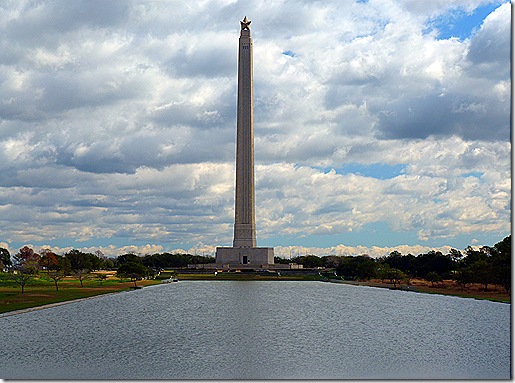 Across from the monument, the battleship Texas is on permanent display. Launched in 1912, the old battleship is the last of the dreadnoughts that served in both World War I and World War II. 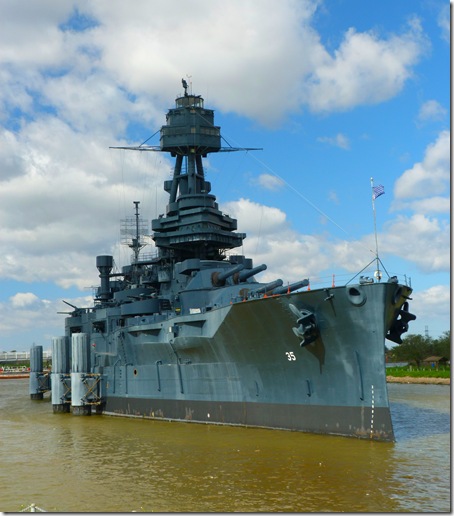 Back at the campground Terry looked out the windshield and spotted this Blue Heron in the bayou right in front of our RV site. There are any number of birds to be seen here, from herons and ibis to roseate spoonbills and ducks. 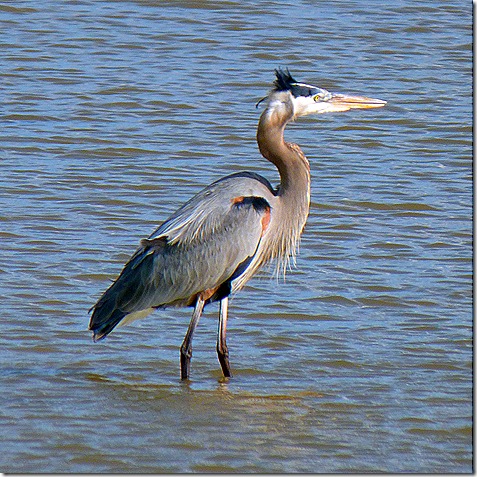 Greg spent the afternoon calling on some of his computer clients, who keep him busy every time he comes back to the Dickinson area. I got some writing done and Terry was busy with paperwork. But not so busy that she couldn’t make four loaves of her delicious oat and flax bread. Yummy!

About 7 P.M. we got back together with Greg and Jan for a light dinner at a nice restaurant called Monterey’s Little Mexico, which has been a favorite of theirs for over 20 years. Today we plan to go down to Galveston and play tourist for a while, then we are getting together for dinner with Brandi, Lowell, and grandbaby Landon. It’s nice having a brand-new extended family!

Thought For The Day – We’ll be friends until we’re old and senile, and then we will be new old friends!