Nick's Blog » A Wonderful Day Together

I appreciate everybody who e-mailed, and left comments on the blog or Facebook wishing us happy anniversary yesterday. You all really make us feel special!

We had a wonderful day! We drove over to Tarpon Springs and spent some time wandering around the sponge docks, something we never seem to get enough of. We just love seeing the fishing boats tied up at the docks with sponges drying on the deck or their lines. 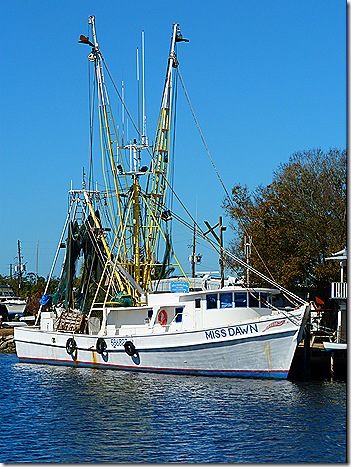 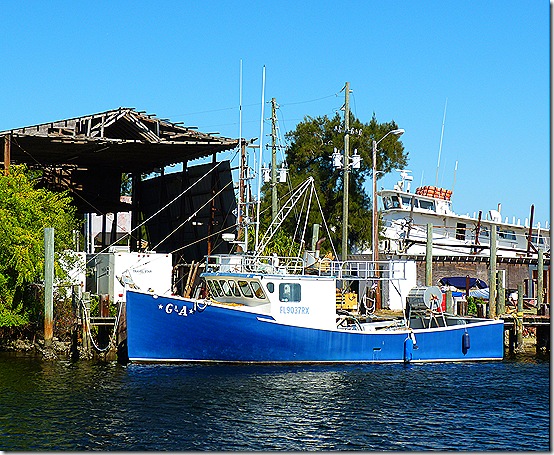 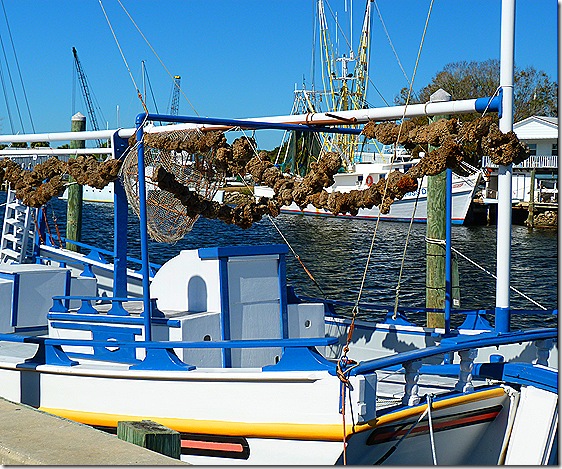 We got lucky, because there was also a street festival going on. Miss Terry loves street festivals, so of course we had to stop and check out all the vendors selling everything from works of art to jewelry, to glassware, olive oil, basalmic vinegar, and all kinds of trinkets. We didn’t buy anything from them, but it’s always fun to look.

We always enjoy watching street performers, and there were several doing their thing as part of the street festival. This young couple were amazing! We spent a half hour or so watching them perform acrobatics that included handstands, midair flips, and even jumping through a hoop. The banter they kept up with the crowd only added to the fun. 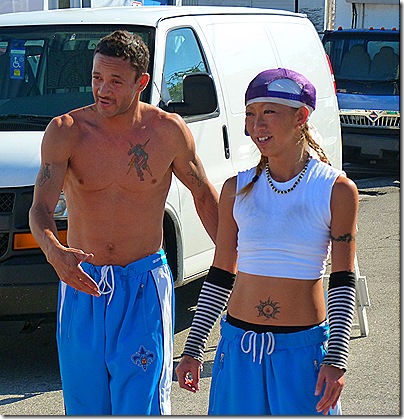 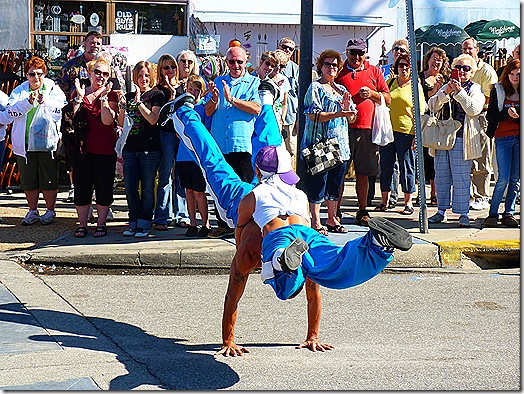 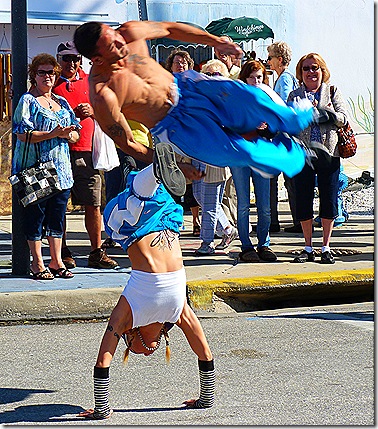 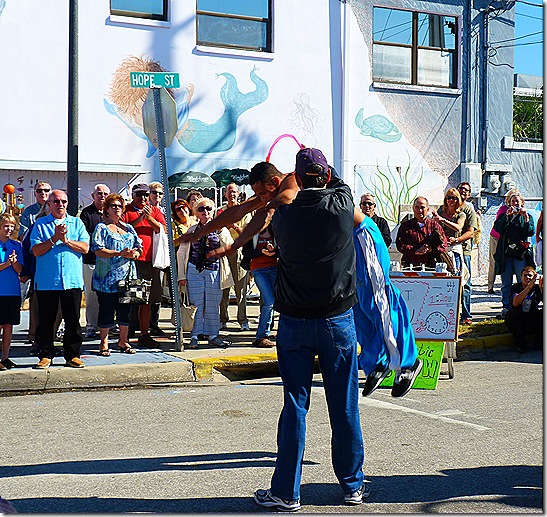 And what’s a trip to Tarpon Springs without a stop for baklava! If you have never had this decadent Greek pastry, which is made up of delicately layered phylo dough with a honey and walnut filling and drizzled with chocolate, you just don’t know what you’re missing.

After we left the docks we drove out to Howard Park, which our friend Bob Meredith had told us about previously. Accessed by a causeway, the park has some very nice beaches which offer spectacular sunset views. Or views of pretty girls in skimpy bikinis if that’s your thing. 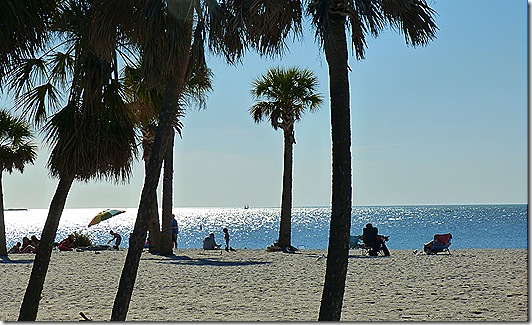 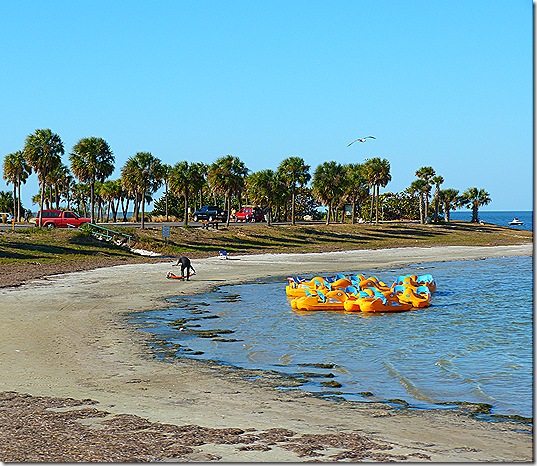 At the park you can rent a paddle boat or kayak, go windsurfing, or just hang out on the beach and watch the aforementioned pretty girls in skimpy bikinis sunbathing. 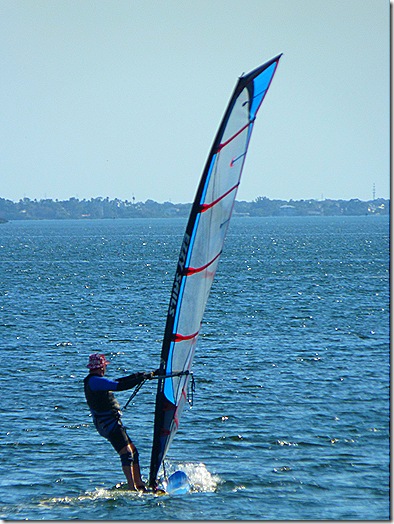 As we were leaving Howard Park we stopped to see this young man working his dog. German shepherds are my favorite canines, and I’ve had several over the years. But I’m not sure I’ve ever seen a better trained dog than this fellow was, at less than nine months old. His owner would throw a rubber training ball into the water, and the dog would set, all aquiver, waiting for the command to go after it. As soon as his master gave him the okay he would charge in the water. But on a spoken command, the dog would immediately stop and look back at his master, and not move until he was released again. Terry asked the young man, who was a firefighter and is training the dog for search and recovery work, who got tired first, him or the dog. He said the dog would wear him out and still be going strong. 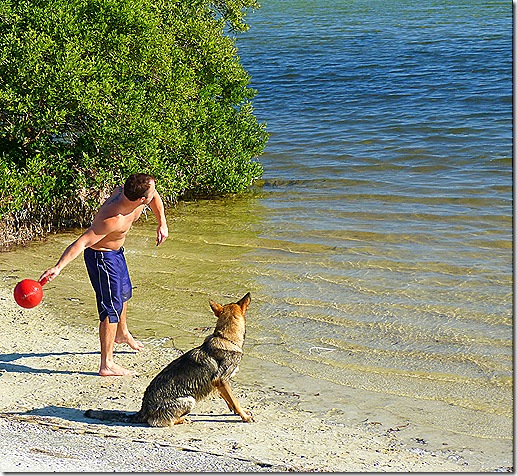 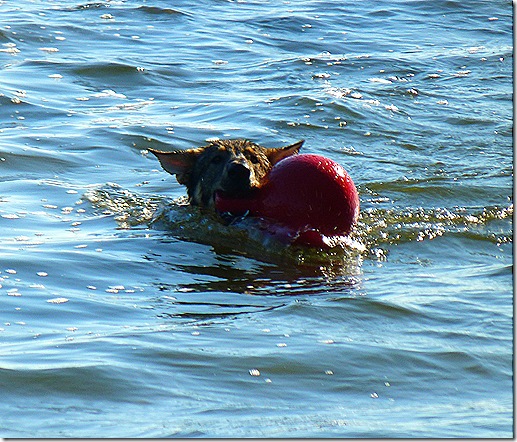 Driving back home, we stopped for a nice anniversary dinner in Brooksville, and got home in time to go through our e-mail and get some chores done in preparation for leaving Sumter Oaks this morning. We will drive up to Ocala and get the heater core replaced today, spend the night at Cummins Coach Care, and Wednesday morning we will be headed west.

Thought For The Day – When a man retires, his wife suddenly gets twice the husband, but only half the income.

5 Responses to “A Wonderful Day Together”