Nick's Blog » Settled In At TTN

We were up early yesterday morning, eager to get to the Orlando Thousand Trails (TTN) preserve early in the day, since it was supposed to be in the high 80s later in the day. Also, because the sites here are on a first come basis, and we wanted to snag one in the 50 amp full hookup G section, if possible.

We pulled out of Peter and Connie Bradish’s lot at The Great Outdoors in Titusville, drove a couple of miles south on Interstate 95, then took State Route 407 to SR 528 east to Orlando. This is a toll road, and I think we stopped at three toll booths, paying $2 or $3 each time. It seemed like one toll plaza was no more than a mile or two from the one before. I wonder why they don’t do things like they do in Ohio and Indiana, and just have you take a ticket when you get on, and pay one toll when you get off. It would save manpower, and make life easier for travelers. But then again, when do government agencies think things like this through, right?

At any rate, we moved right along until we got into Orlando, where traffic picked up. We had a short run on Interstate 4, where traffic was bumper to bumper, then got off on U.S. 192, took it west five miles or so, and then took U.S. 27 north to the campground. We checked in, drove around and found several acceptable sites in the G section, and were backed into our site, had the HWH leveling jacks down and the slides out, and were all hooked up by 12:45, with 67 miles behind us. While they call this the Orlando Thousand Trails, the mailing address is actually Clermont, which is about fifteen miles north of the campground, and yet, the Kissimmee city limits are about three miles south. Go figure.

After we were parked and hooked up, I drove back up to the ranger station to tell them which site we were in, and while I was gone, Terry took a couple of pictures of these Sandhill Cranes as they strutted by to welcome us to the neighborhood. 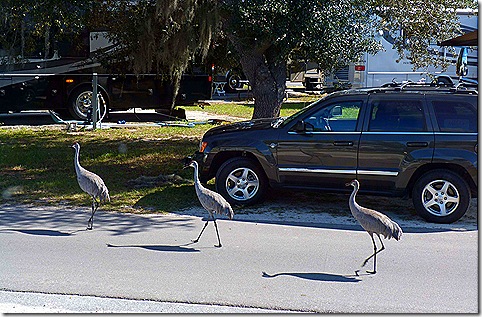 By the time I got back to the motorhome, Terry had the inside all arranged, our rooftop TV dish up, and the basement air conditioner on. It was getting hot, and it sure felt good to come inside to find that it had already cooled the rig down very nicely.

We spent a couple of hours answering e-mails, then I printed out mailing labels for some orders that we needed to mail out, and we took off for the post office in Clermont. But on our way out, we first stopped by the campground’s fishing pier and boat launch, on Lake Hancock. This is a great paddling lake, and we can’t wait to get our kayaks wet. The lake has some big bass, and yes, a few alligators, too. But then again, just about anything larger than a birdbath in Florida has at least one resident alligator. I’ve never heard of a kayaker being molested by one though, and we plan to keep it that way. 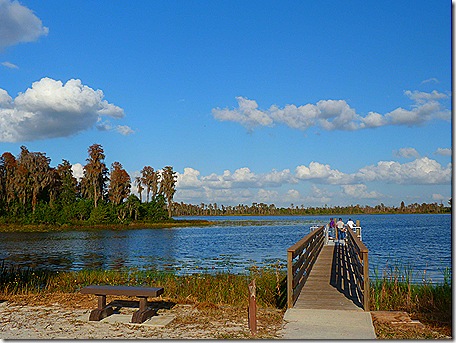 After dropping off the mail, we drove to the Golden Corral in Clermont, which was taking part in the company’s free dinner for veterans nationwide promotion. But the place was a madhouse, with people parking in parking lots of stores across the street and streaming across on foot, eager to stand in line for an hour or so to get a free meal. I really appreciate what Golden Corral does for vets, but if there is one thing I learned in my time in the Army, it was that I never want to stand in line again for anything. We’ll go back another time, and I’ll pay for my meal, thank you just the same.

Back home, we had a relaxing evening, and watched the 20/20 interview of Congresswoman Gabby Giffords and her astronaut husband, Mark Kelly. I don’t care what your politics are, this courageous woman’s recovery from being shot in the head by a crazy man last January is nothing short of amazing. Terry and I both had tears in our eyes more than once over all that she has overcome, and the love story that she and her husband share.

Thought For The Day – Forgive your enemy but remember the SOB’s name.

12 Responses to “Settled In At TTN”