Nick's Blog » A Day Away

I can only stand so many days in a row working inside before I get cabin fever, so yesterday I needed a day away from the motorhome.

Miss Terry has been looking for some Tunisian crochet hooks, and she was hoping that she could find some at Jo-Ann Fabrics. I checked online a found a store in Kissimmee, and as it turned out, it was right around the corner from Sam’s Club. We needed a Sam’s Club run too, so that would work out fine.

On the way, we stopped at a couple of RV parks to drop off bundles of sample copies of the Gypsy Journal. The Kissimmee/Orlando area is a popular tourist destination, and U.S. Highway 192, also known as Irlo Bronson Memorial Parkway, is lined with every kind of restaurant you could ever want, and dozens of souvenir shops attractions and tourist traps.

You can play miniature golf, ride a roller coaster, take a helicopter tour, ride a zip line, take in a show at a dinner theatre, race go carts, have a paintball fight, and… need I go on? I think you get the idea. And as you would expect, the traffic is always hectic. Just dealing with the drivers around here is enough to get the old adrenalin going!

Of course, the big one around here is Disney World, and I am amazed at how many Gypsy Journal readers are, or have spent time, working at “the Mouse.”

I told Terry to take her time at Jo-Ann’s, and I sat outside in the Explorer reading a book on my Kindle. It was a nice day, and with the windows down, it was very pleasant just sitting there reading. Terry took advantage of the time to check out the store very well, and even though they didn’t have the crochet hooks she wanted, she found a book on spinning she wanted, as well as a Sock Loom, which she has been thinking about for a long time. This device is completely adjustable, and Terry is looking forward to trying it out to make her own socks. 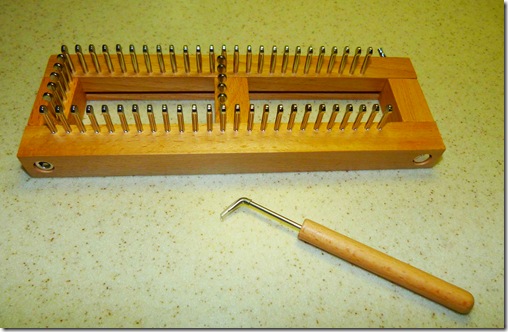 From the fabric store, we stopped at Sam’s Club, and I think it was even more crowded and hectic than the highway outside. If those folks drive their cars the same way the push their shopping carts, I wonder how anybody can survive on the streets for more than a week!

I was hungry for a good steak, so on the way home, we stopped at Longhorn Steakhouse. Our waiter, a very nice man named Chris, recommended the Outlaw Ribeye, promising me that “It’s so good it’ll make you want to shoot your Mama.” Well, I don’t know about that, since I was pretty fond of Mom and I just wouldn’t feel right about that. But I will say that it was probably the best steak I have ever had in my life.

It was after dark when we left the restaurant, so Terry drove home, and we had to fight with the entry gate at the Thousand Trails campground. Terry punched in the four digit code, and the gate would not come up. So she tried again, and again, and yet again. This is the third time this has happened to us in the week we’ve been here. When the gate would not open the other night, Terry eventually had to call the gate guard to get him to open it. But he wouldn’t do that until he first asked her to try the code, and when that wouldn’t work, to tell her to put in the code from the previous week. She told him that we were not here the week before, so we didn’t know that code. I guess he was tired of talking to her, because he opened it then. This time around, when she pushed the button for the gate guard, he just opened it. I watched in the mirror, and the car behind us had to go through the same laborious process. How hard can it be to program the dumb thing so it just works?

Back home, we watched some TV, I answered several e-mails, and posted a new Bad Nick Blog titled What’s Next, Arresting Dogs? Check it out and leave a comment.

Thought For The Day – If women are so great at multitasking, why can’t they have a headache and sex at the same time?

5 Responses to “A Day Away”