I will admit it, I  have become one of those kind of people!  We always believe that it will never happen to us, but it’s true. I have become the kind of grouchy old fart that seems to have little patience for rudeness and stupidity, and there are times when I don’t hesitate to take people to task when they exhibit behavior that others might ignore. And there are sure a lot of clods out there who need it!

Actually, I’ve been this way for a long time, much to the occasional chagrin of my bride. Several years ago, we were parked at the outer edge of a WalMart parking lot with several other RVs, waiting to go into a rally the next morning. Parked nose to nose with us was a white Ford dually diesel pickup pulling a big fifth wheel. The owner had already exhibited a lack of RV etiquette by extending his slide room out into the driving lane, instead of pulling in facing the other direction, so that if he had to extend it, it would have been over the grass. Somebody mentioned that to him, and he said it was a big parking lot, people could drive around him.

He had a midsize dog, and took it for  a walk, and it did its business right at the foot of our step. Once it had finished, the jerk just started back to his trailer, without cleaning up the mess. I called out to him, and told him that if he didn’t have a baggie to pick up the mess, I’d give him one. He just shrugged his shoulders and said “It’s biodegradable, it’ll wash away with the first rain.” I told him that, in the meantime, I had to step over it to get out of my RV and he said something to the effect of “So what?”

Well, even back then, Bad Nick was lingering just beneath the surface of civility, so he grabbed a baggie, scooped up the big pile of poo, and mashed it right down on the big, shiny hood of his truck! He hit the roof and started to raise hell, but ol’ Bad Nick just smiled back at him and said  “It’s biodegradable, it’ll wash away with the first rain.”

Another time, we were in Lake City, Florida, and saw this rig parked in the local WalMart parking lot. This was a few days before Christmas, and the clod was not parked out on the edge of the lot, like one should be. No, he was in the regular parking lanes, taking up SEVEN spaces! Did I mention this was just before Christmas? To make matters worse, he had his jacks down, slide rooms out, and BBQ grill out. I stopped and took several pictures, and he asked if I liked his motorhome and trike. I told him no, that I owned the Gypsy Journal, and that I was going to print the picture in our next issue, so that when RVers could not park there any more, my readers would know why! That’s when he said he was only going to be there until the FMCA rally in Brooksville (which was still a month away!). Yeah, Bad Nick showed up again, and by the time the conversation was done, and we had finished our shopping, he was gone! 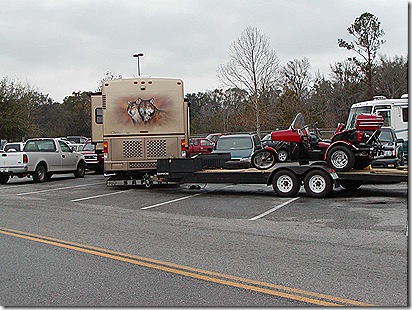 Bad Nick wasn’t in Box Elder, South Dakota a few weeks ago, when Sandra Swanson took this picture of a motorhome’s leveling jack stuck six inches or more deep. And of curse, when the folks left, they didn’t even bother to try and fill in the damage. Yeah, you could beak an ankle if you stepped in a hole that deep, but what the hell, that’s why you have two ankles, right? Yeah, Bad Nick would have had fun with that one too! 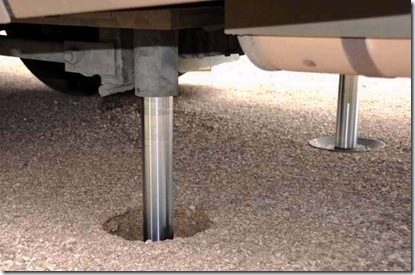 The Escapees RV Club has a Boondocking Etiquette Letter that they suggest members carry copies of to share with RVers who are breaking the basic rules of boondocking, such as using leveling jacks, using awnings, etc. There are times I think I probably should print some of them out to carry with us. But, in my personal experience, most of the people whom I have encountered who commit the worst offenses are not clueless newbies; they are almost always folks in upscale RVs who have been round a while, and many of them sport plaques and decals from most of the biggest RV clubs. They just don’t give a damn. I have had more than one of them tell me that it’s a public parking lot (no, it’s a private parking lot owned by WalMart or whoever), and/or that “I paid $250,000 (or whatever) for this thing, and I’ll park it wherever I damn well please!”

Yeah, I know. It makes me mad too. Rude, self-absorbed clods like this make all of us look bad. They are the reason more and more businesses no longer allow RVers to park overnight, and that more and more communities are passing laws banning the practice. Bad Nick has his work cut out for him. So many A-holes, so little time!

Thought For The Day – If I agreed with you, we’d both be wrong.