We awoke yesterday morning to fog so thick it obscured the parking lot at the RV park, but by the time we piddled around, had breakfast, checked e-mail, and finally got ready to hit the road, about 10, it had burned off.

We drove about 85 miles east to West Fargo, where we arrived at Bonanzaville about 11:30. Bonanzaville is a re-created small Dakota town from the early days, made up of a collection of historic buildings from  around the state. These include a bank, railroad depot, one room school, several houses and log cabins, and a general store, among others. 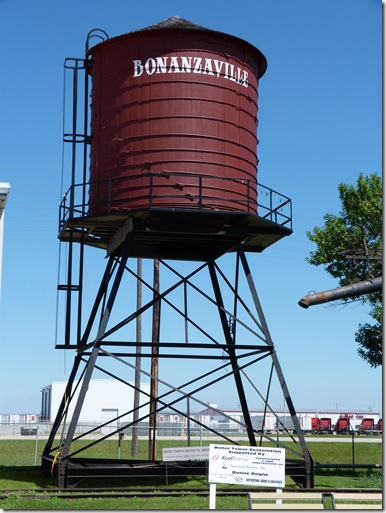 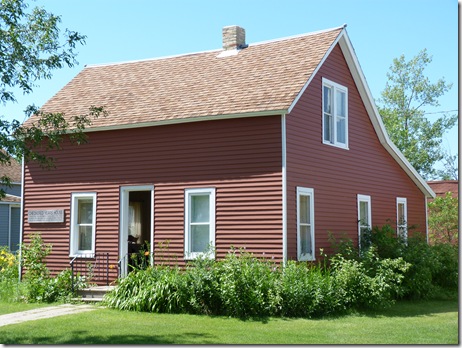 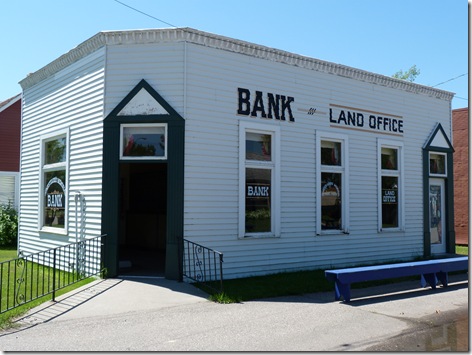 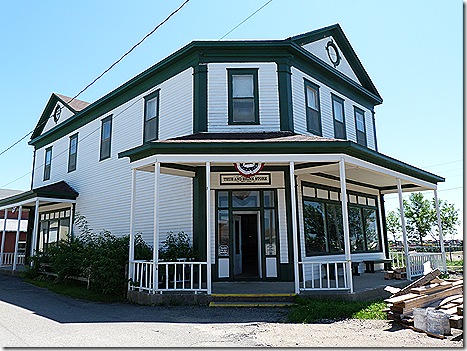 Overall, the place was interesting, but it seemed like it needed a lot of attention. Many of the items on display were coated in dust, and while all of the buildings were open, the lights were turned off in many of them, making it difficult to see anything. I’m sure they do this as an energy saving measure, and in a couple I found a light switch to turn on, but we saw several folks who just poked their heads in, saw a dark room, and left. 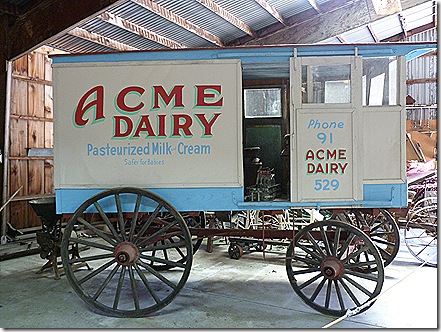 The complex includes several specialty museums, such as the Eugene Dahl Car Museum, which had over 80 antique and classic cars, a police  museum, telephone pioneer museum, and an airplane museum. But again, there were no lights on in the car museum, so it was hard to take any good photographs; and the same in the police museum, where I did find the light switch and turned it on. 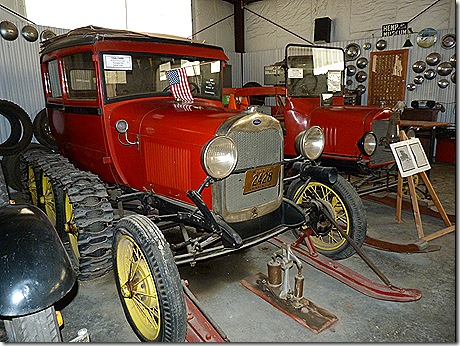 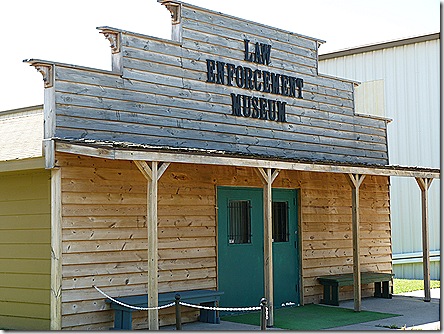 The airplane museum had a few nice planes, but again, there just seemed to be an air of neglect. There were several metal culverts lying on the floor in front of the displays, and a bobcat parked in front of one plane, like workers had just stopped for the day and left.

Overall, our impression was that it could be an excellent attraction, if somebody were to put some effort and elbow grease into it. But as it is, it leaves a bit to be desired.

We spent a couple of hours at Bonanzaville, then got back on the highway and crossed into Minnesota, where we took U.S. 10 about halfway across the state to Motley, and then got on State Route 210 and followed it to Interstate 35, pulling into the Black Bear Casino about 7:30, with 325 miles behind us. Except for some rough stretches along SR 210, it was a good driving day.

We planned to boondock for the night in the back lot of the casino, and checked to be sure that was okay, and once we were parked, we decided to drive the Explorer the 20 miles into Duluth to scope out the area, and check on the Elks Lodge, where we might spend another night. We have some places we want to see in Duluth, and across the bridge in Superior, Wisconsin, to collect stories for future issues of the Gypsy Journal.

And that’s when the excrement hit the oscillating device. As it turns out, you can’t get there from here. You can’t get anywhere in Duluth you want to from Interstate 35, because every exit in the downtown area seems to be closed, including the exit to U.S. 2 to cross the bridge into Wisconsin. After navigating our way through an extended narrow, bumpy, twisty construction zone, we were finally able to cross on U.S. 53, and we checked out things in Superior. Then, crossing back into Minnesota, we couldn’t get back onto Interstate 35 southbound, because that exit was closed, too!

By then we were tired, crabby, and frustrated, so we stopped for a burger, and asked the folks at the restaurant how to get where we needed to be. They all agreed that wherever you need to go in Duluth this summer, you can’t get there because every bleeping exit is closed! We finally took a roundabout route through the countryside until we could access the interstate ten miles south of town.

Today we’ll figure out what we’re going to do, and how to get there to do it.

Thought For The Day – Only those who attempt the absurd can achieve the impossible.

6 Responses to “A Good Day & A Frustrating Evening”