Yesterday was a day for spouting horns and lighthouses.

We had a UPS shipment that was scheduled for delivery to the South Jetty NACO campground yesterday, and since we had cancelled our stay there, we wanted to stop by and ask them to hold it for us, if it hadn’t already arrived. It hadn’t, and the lady on duty at the ranger station said she’d be sure to hold it there for us.

Since we were out, we decided what the heck, we’d drive to Newport to check out a couple of options there for our next stop. It is about 50 miles from Florence to Newport, and it’s a very scenic drive, with lots of beautiful vistas of Pacific waves crashing onto unspoiled beaches. 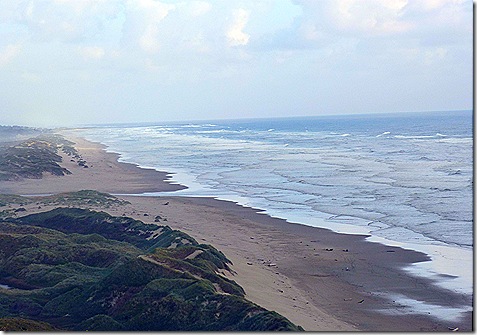 Along the way, Terry got a couple of pictures of the historic Haceta Head Lighthouse, a few miles north of Florence. We love lighthouses, and the Oregon coast has a lot of them to delight any photographer. 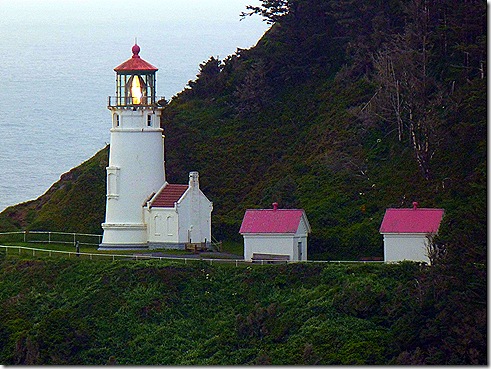 I made a mental note not to get too close to the side when when we come through here in the motorhome. 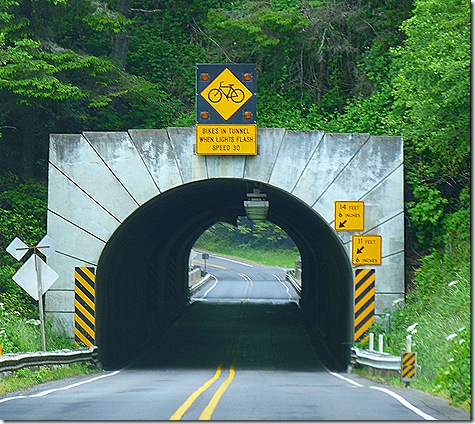 Whalers Rest is a Leisure Time Resort near Newport, and also a Resorts of Distinction campground. We stopped to check it out, and decided that yes, it would be okay for a week’s stay. Since there were Thousand Trails signs all over the place, and the rangers were wearing Thousand Trails uniforms, I asked if we could come in under our regular Thousand Trails membership, and they said yes, just go online and make a reservation. Cool!

We also stopped to check out the Elks lodge in Newport, just in case. It has back-in RV sites with water and electric, and is only a couple of blocks from the historic waterfront. That would work okay too.

Our friend Laurie Brown had also suggested the campground that the Lincoln City Elks operates, and since it was only another 21 miles further north, we figured, why not? The campground is located a couple of miles up a two lane road off Highway 101, and as it turns out, recent construction has left the roadway very rough and uneven. The campground was okay, but we decided that we like Newport a lot better. 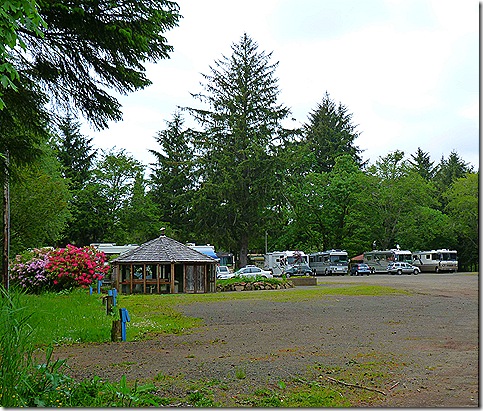 Driving back, we had to stop in several places so Terry could take more pictures. When you combine the spectacular natural beauty all along the coast with Terry’s excellent eye, and her new Panasonic Lumix FZ40 digital camera, that’s one heck of a winning combination. The only problem is that she takes hundreds of pictures on every outing, and I spend hours deciding which ones to use, because they’re all so good. 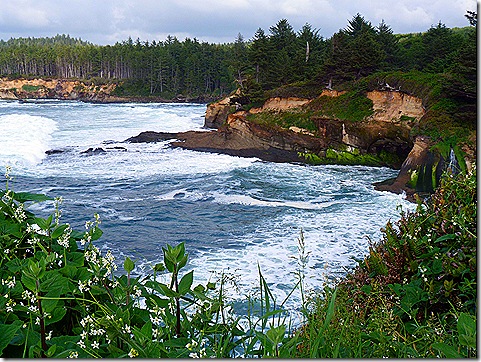 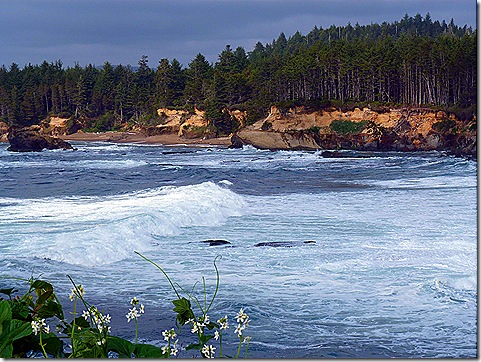 Depoe Bay is famous for its spouting horns, rock formations that have holes eroded into them by eons of wave action, and when the surf crashes into them, they send up amazing waterspouts that look like a whale spouting. After an eruption of water and spray, the water foams and washes over the rocks, and then it’s time for the next wave to hit, and the process repeats itself all over again. I could spend hours watching the waterspouts. They’re just amazing to see. 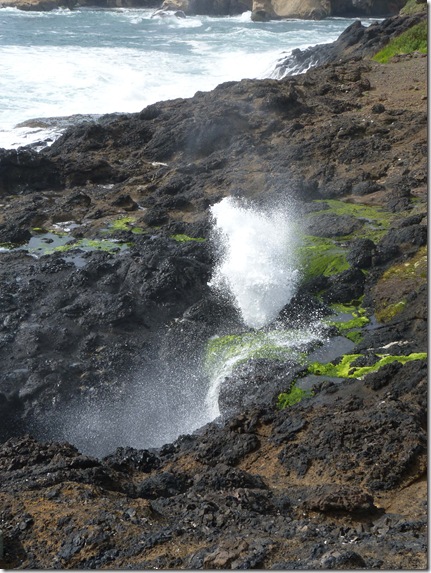 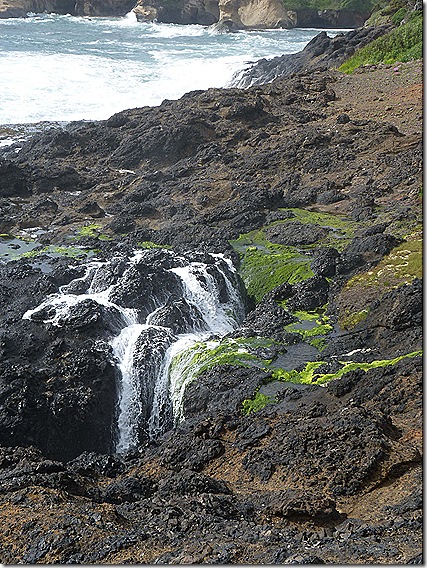 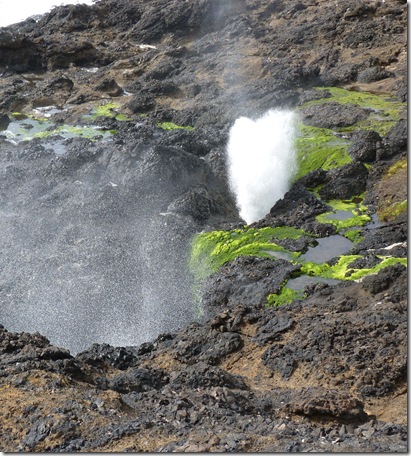 Years ago, on a trip to the area, we stopped to watch the spouting horns, and got a bonus when somebody pointed out two gray whales playing just offshore. There were no whales yesterday, so we had to settle for this seagull instead. 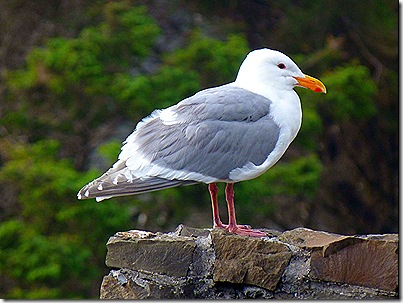 As we approached Newport on the return trip, Terry took this picture of another historic lighthouse, this one at Yaquina Head. She took the picture from about two miles away, using the camera’s zoom lens, and without a tripod. Though it’s a little grainy from the magnification, it still looks neat. 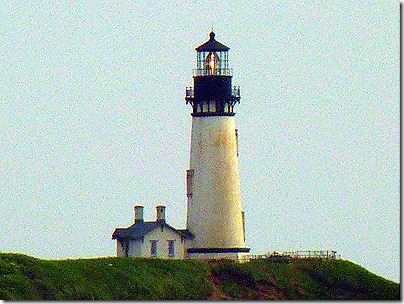 The clouds and sunlight were creating amazing patterns on the sky and water, and Terry shot several pictures that capture the beauty of it all. This is my favorite. 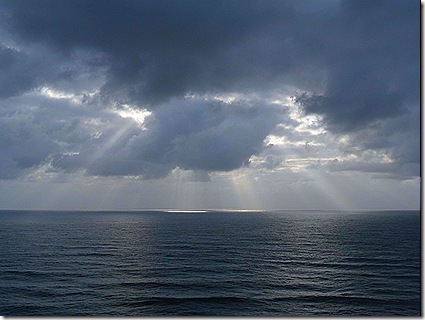 The secretary at the Florence Elks lodge had recommended a Chinese restaurant called Chen’s Family Dish, so we stopped for dinner when we got back to town. If you’ve read the blog for any length of time, you know that I love Chinese restaurants, and I can say without a doubt that it was absolutely THE BEST we have ever had anywhere! I had the crab fried rice, and it was light and delicious. The serving was huge, with big chunks of crab meat. I wasn’t sure I could finish all of it, but it was way too good to leave any on the plate! Terry had a seafood stir fry that included fish, shrimp, clams, scallops, mussels, and lots of veggies, over glass noodles. Again, a huge serving, and she said it was beyond delicious. The servers were very friendly, the restaurant is very clean and new looking, and the prices are reasonable. We’ll probably only be in Florence one more night, but you can guess where we’ll be going back for dinner!

Back at the Elks lodge, I logged onto the Thousand Trails website and tried to make a reservation at Whalers Rest, only to discover that since it is actually a Leisure Time Resort (LTR), which is one of many camping chains in the Equity Lifestyle family, of which Thousand Trails is one, and since we don’t have LTR as part of our membership, I couldn’t make a reservation. So then I logged onto the Resorts of Distinction website to try and make a reservation through them, only to find that since Whalers Rest is a sister park to Thousand Trails, I couldn’t do that either. Can you say confusing? No problem, I’ll call the reservation number today, and see what I can come up with. Or, we’ll stay at the Elks, which is fine with me. We really like Newport and want to spend a few days there before we move even further north.

Thought For The Day – I was put on earth to accomplish a certain number of things. Right now, I am so far behind, I will live forever.

9 Responses to “Spouting Horns And Lighthouses”