For several mornings this week, we were woken up about 7 a.m. when landscapers started trimming the high oleander hedges behind our motorhome, using all kinds of noisy power equipment. I understand that chores like this need to be done, what I don’t understand is that there is probably a 1/4 mile of hedges, and only half a dozen RVs parked here at one end of them. So why do they need to start at our end and work their way down to the unoccupied end of the place? Wouldn’t it be just as easy to start at the far end and work this way, arriving at a more reasonable time?

We got lucky yesterday, in that they were finally done with all of the trimming and didn’t wake us up. Instead the alarm clock woke us up, because Greg and Jan’s friends Al and Adrienne Cox were coming over to see the custom computer workstations that Carlyle Lehman at Focal Wood Products made for our Winnebago motorhome.

Greg and Jan met Al and Adrienne when they were workamping in Alaska a couple of years ago, and the friendship has flourished. We all had dinner together earlier in the week, and both Terry and I enjoyed meeting Al and Adrienne. In honor of their visit, Miss Terry made some of her delicious cinnamon rolls. That’s twice in one week! Even I’ll get up early for that!

We all sat around visiting for a couple of hours, and after Al and Adrienne left, the rest of us broke up watching a couple trying to park their big diesel pusher motorhome. The RV park here at the Pima County Fairgrounds is huge, and most of the RV sites are pull through, but these folks just couldn’t seem to get it right. The first indication there was any kind of problem was when I happened to look out the window and see the motorhome heading quickly right for a huge light pole surrounded by a large, bright yellow concrete barrier. The wife was off to one side side waving her hands, and the man seemed to notice that he was about to crawl up the side of the light pole at the last minute and slammed on his brakes.

Then we watched as he tried to back the coach up, in a series of short, sharp, fast S curves, while his wife waved her arms around like a windmill. This went on for several minutes as he jerked forward, jerked backward, and got nowhere. Don’t ask me why he didn’t just make a big circle and come back into the site. The place is almost empty, and like I said, they are pull through sites.

Finally, the wife stormed inside the rig, he popped out, and she tried to park it. And again, instead of driving around in a circle to start over, she too tried to back it up. Apparently, neither of these two understood that the accelerator doesn’t have to be floored to move their RV, or that they could back up in a straight line, so she made her own series of winding movements backward and forward. All the time, all four of us inside our motorhome were roaring with laughter. A fellow from another rig near us came out with his camera to take pictures, but we weren’t that crass. Instead, Greg used my Kodak Zi8 video camcorder to film it through the windshield!

Eventually, the wife did make that wide circle mentioned above, drove right through the site very quickly, and ended up back where she started! I’m telling you folks, if my pal Dennis Hill from the RV Driving School would have been here, he’d have offered them free lessons just to save the tank of diesel fuel they were burning up trying to park!

Eventually they just shut the darned thing down, their rear end at least 10 feet away from the utility pedestal at an angle, and the front end of their motorhome sticking out into the roadway. And just think of it, in a day or two they’ll be driving down a highway in that thing! Greg or I probably should have gone out to offer to help them, but fat guys like us can’t run as fast as they were slinging that coach around, and neither of us wanted tire treads on our butts! 🙂

About 2 p.m. I left for the V.A. hospital for my intake physical, and that took a couple of hours. I was very pleased with how quickly everything went, and how thorough the nurse practitioner was, as she asked me about my background, health history, and current medical issues. I have to go back Monday morning for some blood work, to pick up some medicine at the pharmacy, and for an EKG, if they can work me in. Overall, for a fat old guy, I’m in pretty good shape. Of course, since laughter is the best medicine, watching the folks trying to park their RV earlier in the day probably cured a thing or two!

While I was at the hospital, Miss Terry was busy baking up several loaves of oat maple wheat bread. She’s about got her convection oven mastered, and it’s amazing what she can do with that thing! 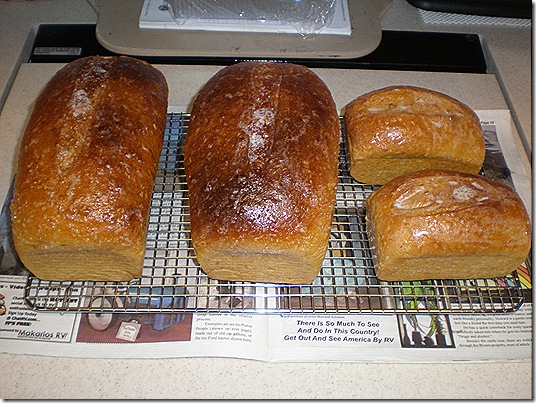 About 5:30, we drove into town with Greg and Jan, picked up my cousin Beverly, and all five of us went to dinner at Golden Corral. We only have a few day left here in Tucson, and I want to spend as much time with Beverly as I can before we have to hit the road. We don’t get to see her nearly as often as we would like to.

Thought For The Day – Blessed are those who hunger and thirst, for they are sticking to their diets.

7 Responses to “Laughter Really Is The Best Medicine”