Even though I knew it was going to work, and even though the folks at the Ford dealer who reprogrammed our Explorer’s computer brain so the four wheel drive transfer case would go into neutral for towing assured me it would, I still wanted to be sure everything was working properly before we took off, towing the SUV behind the motorhome for the first time.

So, once we pulled off of our site at the Orlando Thousand Trails yesterday morning, we hooked the Blue Ox tow bar to the Explorer, I went through the steps to put the transmission and transfer case in neutral, then had Miss Terry sit in the front passenger seat while I drove through the RV park, so she could let me know if the Explorer was making any nasty noises, or if the rear view mirror or wheels fell off.

Everything went fine, though Terry said some people we passed acted like they had never seen a guy stick his wife back in the dinghy when he hit the road. Don’t those people have any appreciation for peace and quiet? 🙂 (You just know I’m going to pay for that one, don’t you?)

We pulled out of the  campground a few minutes before 10 a.m. and followed U.S. Highway 27 south down the state, passing through the small towns of Avon Park, Sebring, and Lake Placid.

As we passed the M RV Resort, just north of Moore Haven, I told Miss Terry that the place sounded familiar for some reason. A mile or two down the road it hit me – that’s where our good friends Stu and Donna McNicol are spending the month of December! Well, duh! By then it was too late to turn around and go back, and we didn’t know if they were home or out riding their motorcycles anyway. I guess we’ll have to catch them next time around.

We battled a very strong wind all the way south, that alternated between hitting us head on, to slamming us broadside. The wind really took a toll on our fuel mileage; according to our Silverleaf VMSpc engine monitor, we were only averaging about 5.8 miles per gallon.

We passed through mile after mile of sugarcane fields on both sides of the highway, which is a major crop in this region. 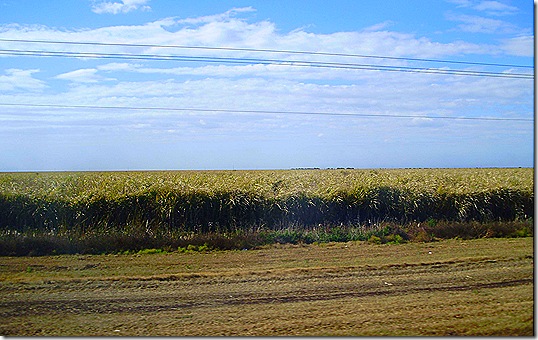 There were canals alongside the highway most of the way, turning off here and there at right angles back into the cane fields. I told Terry they might be fun to kayak in. Shortly afterward we noticed several cars pulled off the road on the other side of the highway, their drivers and passengers all out and looking down over the guardrail. Terry said they were probably checking out the alligators that surely live in the canals. Here in Florida, any body of water bigger than a kid’s backyard wading pool probably holds a gator or two. 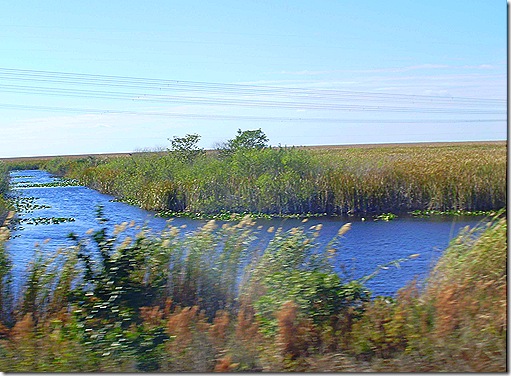 In different areas, we noticed several huge plumes of smoke off in the distance, and when we passed by close to one, it looked like the farmers were burning off their fields. As windy as it was, I sure hope they were being careful, because if one of those fires got away from them, it probably wouldn’t have stopped until it hit the Atlantic beaches! 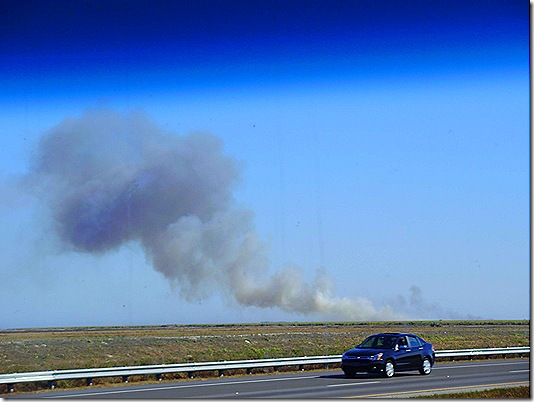 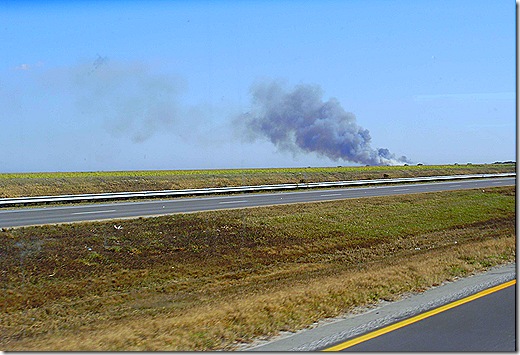 Eventually we reached Interstate 75 and tuned east for a few miles, and then got onto Interstate 595. Traffic was noticeably heavier, and by the time we reached Interstate 95 it was really hectic. We pulled into Paradise Island RV Resort in Fort Lauderdale about 2:30 p.m., with 220 miles behind us. I sure was glad to be off the road after our windy drive south!

When I got out of the Winnebago and headed for the office to check in, I was met by Gypsy Journal subscriber J.C. Webber, whom we had spoken to briefly at the Thousand Trails last week. Once we were in our site, J.C. and his wife Beverly came by to check out the custom desk units that Carlyle Lehman from Focal Wood Products made for us a while back.

Later in the evening, Jim and Chris Guld from Geeks on Tour also came by to visit. It’s nice having friends everywhere we go!

We’ll be here a week or so, and then, depending on the weather, we hope to get down to the Keys. But if it stays windy and cold, like it has so far this winter, we may scratch that idea and go to Plan B, whatever the heck that is.

Thought For The Day – Even when I have pains, I don’t have to be one.

5 Responses to “A Windy Drive South”