Nick's Blog » Can You Say Frustrating?

I have had a very frustrating couple of days, and if I had any hair left, I’d probably be pulling it out about now.

Our Ford van has 163,000 miles on the odometer, not counting many thousands more being towed behind our motorhome, and behind our bus conversion before that. It’s reached the point where it’s beginning to nickel and dime us to death. So we have been shopping around for something to replace it.

We found an absolutely beautiful low mileage 2005 Ford Explorer Limited 4×4 at a nearby dealer, and according to Motorhome magazine’s 2005 Dinghy Towing Guide,  the Explorer can be flat towed after the installation of a Neutral Tow Kit, which is about a $30 part. Cool, let’s do it! 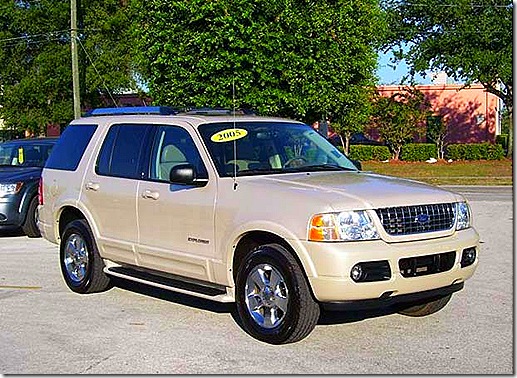 Before we signed the papers, I wanted to double check on the procedure for setting up the vehicle for towing. Since the dealer selling the Explorer is not a Ford dealer, I went down the road to the Ford garage and told them what I wanted to do. They told me that basically the dealer plugs the Neutral Tow Kit into a socket under the dashboard, and then they ”flash” the vehicle’s computer to tell the 4 wheel drive transfer case to shift into neutral when I step on the brake pedal and push the 4×4 button, with the transmission in neutral.

However (you knew there was a “however” coming, didn’t you?), it’s not quite that simple. Ford no longer carries the Neutral Tow Kit, and the dealer can’t order one. I found one dealer in Oregon who has several of them in stock, for $375 each plus $30 shipping, and I found one on eBay for $500. Several websites list them, but nobody actually has one, they all want to take your money and put it on backorder.

From what I understand, the tow kit is nothing more than an LED light, a plug, a template for mounting the gizmo, and three safety stickers.

I have spent the last two days online and on the phone, calling dealers all over the country, talking to a Ford district rep, and getting a different story from everybody I talk to. Some insist that I have to have the tow kit to make things work, some say all a dealer has to do is flash the computer program with or without the tow kit, and some say they have made their own replacement for the tow kit by simply wiring a 12 volt LED light into the circuit where the other tow kit would go. If you can find a dealer to flash it with a homebuilt replacement. Many won’t do it for liability reasons.

It’s a pain, but I understand the liability part of things. Years ago, when we first went on the road, we bought a new Toyota pickup to pull, and Toyota insisted it could not be towed. It was a manual transmission 4×4, so all I did was put the transmission and transfer case in neutral and we towed it for years with no problems. But the bean counters are all programmed to say no to anything, because “what if?”

Now, I think that Ford builds some very fine automobiles and trucks, and I also think that they have some very dumb and/or greedy employees. Three dealers immediately wanted to sell me a new vehicle, and when I told them I wasn’t going to do that, they had no time for me. Several service departments told me that an Explorer can’t be towed in any configuration, and others just scratched their heads and had no advice at all.

The very nice folks at Camper Connection pointed me toward a local Ford dealer’s garage, and the service manager agreed that the tow kit is nothing more than an LED light, a plug, a template for mounting the gizmo, and the safety stickers. Yesterday, the selling dealer let me take the vehicle to the Ford dealer, so he could try flashing the computer without the LED light in place. It didn’t work, so he told me to get an LED light, and we’re going to try again this morning.

Keep your fingers crossed for us. We love the Explorer, it meets all of our needs, the price is right, the financing is in place, but for want of a silly $30 part, the whole deal may fall through. Can you say frustrating?

UPDATE: We’re in luck! Jarrett Gordon Ford installed the LED light I got, and everything works fine for towing!

Thought For The Day – Even if you’re on the right track, you’ll get run over if you just sit there.

20 Responses to “Can You Say Frustrating?”