Yesterday was a short travel day for us. In fact, one of the shortest we’ve had in a very long time.

We enjoyed our time at The Great Outdoors in Titusville, Florida, and I took a photo of our Winnebago in Peter and Connie Bradish”s lot before I started unhooking our campground utilities in preparation for leaving. 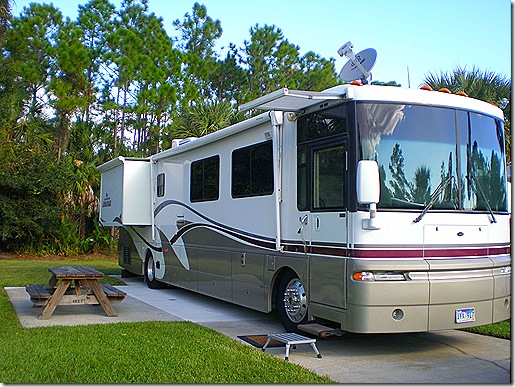 This is a very upscale RV resort, where you can buy your own very nicely groomed lot, and enjoy every amenity you could imagine. 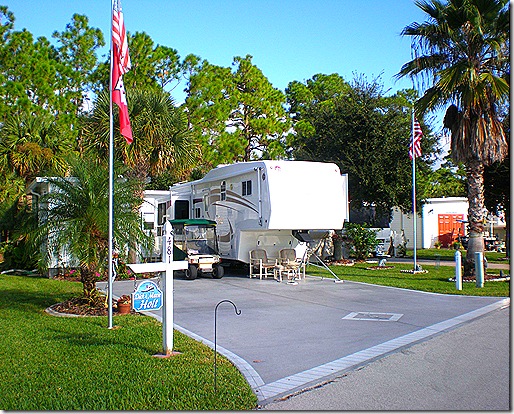 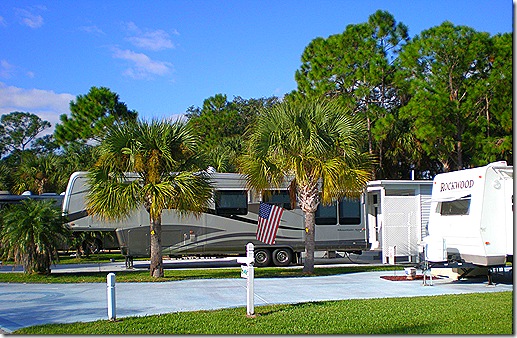 The resort has several small lakes, and I’m told the fishing in them is good, but I never got the opportunity to check that out. 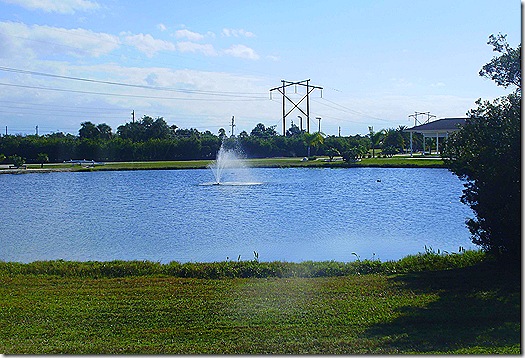 The resort even has its own church! As you can see, most of the homeowners drive their golf carts everywhere, even to church! 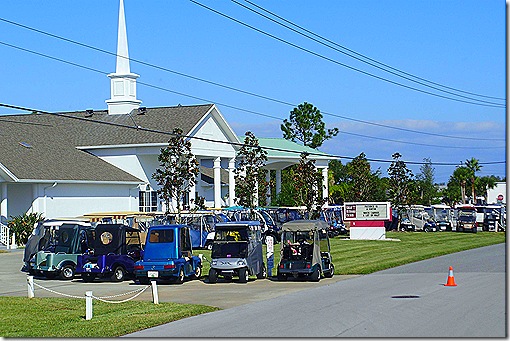 We left The Great Outdoors just after 10 a.m., traveled south to the next exit on Interstate 95, and took State Route 407 a short distance until it merged with State Toll Route 528, which took us west around the south side of the Orlando metropolitan area to Interstate 4. We traveled just a mile or two south on Interstate 4, exited onto U.S. Highway 192, then took it west a few miles to U.S. Highway 27, where we turned north a couple of miles to the Orlando Thousand Trails preserve. Peter Bradish had given us the directions, and they were perfect.

Well, the directions Peter gave us were perfect. The directions we got from our GPS were not so perfect. We had entered the address of the Thousand Trails into our GPS, so we wouldn’t miss the turn into it, because somebody had told me that a condominium complex next door hid the sign until you were right on top of it. According to the GPS, we had over a mile to go, when I noticed the Thousand Trails sign, which was indeed hard to see. By then it was too late to make the turn.

U.S. 27 through here is a wide six lane divided highway, with designated left turn lanes. We drove a couple of miles, looking for a place to turn around, but I wasn’t sure that we could make a U-turn with the van in tow. I finally pulled into a left turn lane, and decided it would be too tight to make the U-turn, and the last thing I wanted to do was be jackknifed across three lanes of busy U.S. highway, even on a Sunday morning. There was a divided driveway leading into a housing subdivision on the far side of the road, and I told Terry I was going to pull into the subdivision instead, and we’d unhook the van from the tow bar and get pointed back in the right direction.

It wasn’t until we had pulled into the driveway that we discovered that it was a gated community. So there we were, with a locked gate in front of us, two cars that had pulled in behind us, and no place to turn around. Can you say “oh crap?”

Fortunately, the fellow in the first car gave us the gate code, we punched it in, and the gates swung open. I pulled in, parked along the curb, we unhooked the van, and got the heck out of there. A GPS is a handy tool, but never trust one completely.

We had never stayed at this Thousand Trails before, but I have to say that we’re impressed. The 255 acre campground has 850 full hookup RV sites, a swimming pool, activity center, and a 60 acre spring fed lake. The property also backs up to Lake Hancock, a large lake that is supposed to be home to some massive trophy bass. 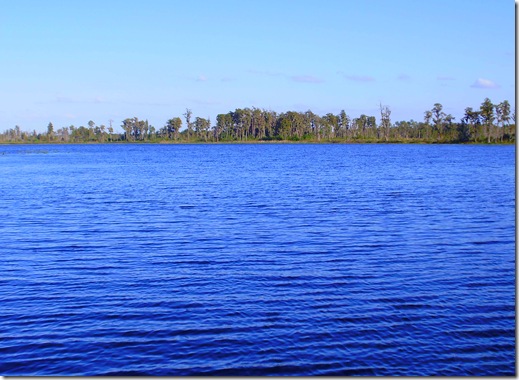 We choose a site on a corner at the end of a road, with some trees on one side of us, a pasture behind us, and the sites next to us and across the street are empty. Gee, no neighbors. Maybe I’ll just run around in my BVDs. No, Miss Terry says maybe I won’t. 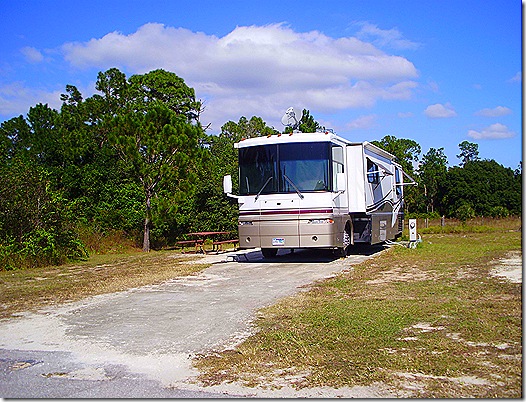 A sky writer was posting this message for us when we got into our RV site. Isn’t that nice? I love you too. 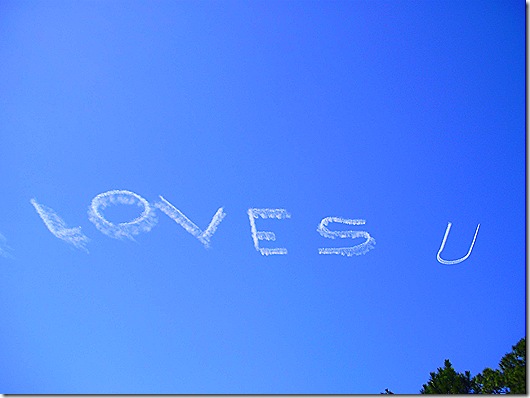 Even with the unexpected detour caused by the GPS, we drove exactly 70 miles, and I was in the office at the Thousand Trails registering by noon. That’s a short travel day!

Once we were parked and hooked up, we drove down to the campground’s boat launch at Lake Hancock, to check things out. It was windy and chilly, but the weather is supposed to improve by mid-week, and getting out on the water is a priority for us. Our kayaks haven’t been wet in over a year, and we need to correct that. 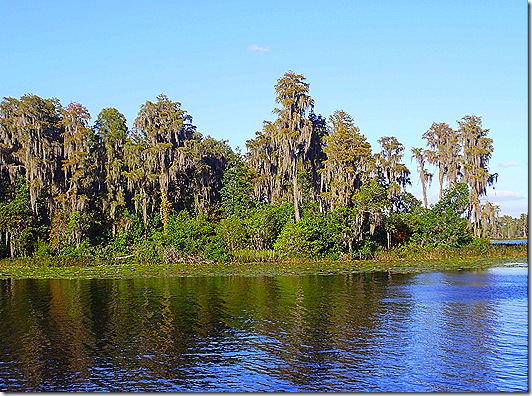 I bet some whopper bass live in these lily pads! 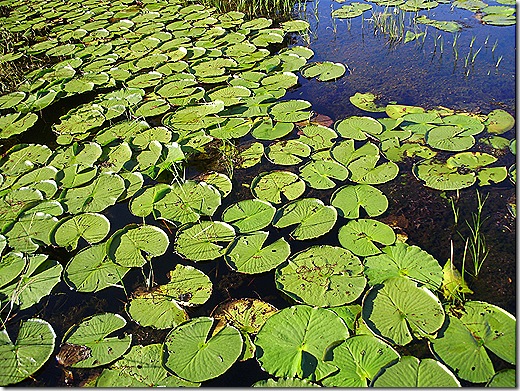 The lake isn’t home to just big bass. I don’t think I’ll be dangling my toes in the water! 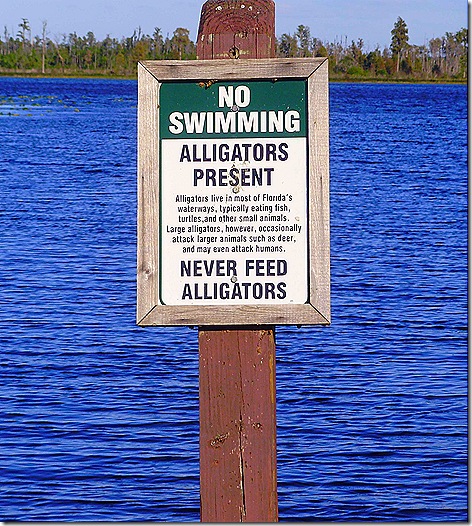 Terry and I walked out on the floating dock, and we heard a loud thumping sound and a big splash of water in this little lagoon. Then several fish jumped. We didn’t see the gator, but we knew he was there. 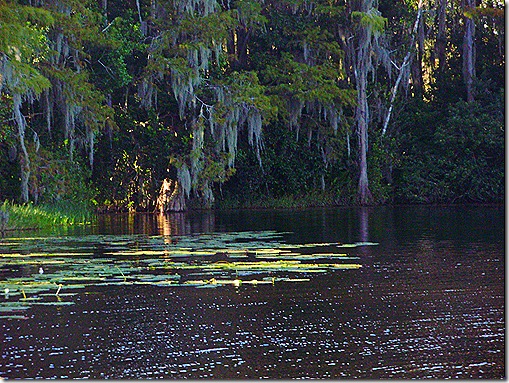 We’re looking forward to doing some relaxing here, getting some paddling in, and I may just buy me a fishing rod and a license, and see if I can tempt one of those big bass to bite!

Thought For The Day – A bargain is something you can’t use, at a price you can’t resist.

11 Responses to “A Short Travel Day”