Yesterday morning Daryl and Judy Patterson stopped over to say hello and goodbye as we were getting ready to leave Elkhart Campground.  We only had a minute to chat before they left so we could get everything unhooked and ready to take off.

Experienced RVers like Daryl and Judy know that if you get preoccupied while doing the hooking up or unhooking chores, mistakes can easily happen. We’ve all had it happen at one time or another… somebody comes by and you get to talking, and the next thing you know, you’re pulling away from the RV site and forgot to unplug your electric power cord, or to put your tow vehicle’s transmission in neutral. Mistakes like that can be not only embarrassing, but expensive too!

After saying goodbye to Bob and Gita Patel, Jim and Chris Guld from Geeks on Tour, Greg and Jan White, and everybody else in sight, we pulled out of the campground a couple of minutes after 10 a.m. and headed east on Interstate 80.

We got onto the Ohio Turnpike, and stopped at the Fallen Timbers Service Plaza near Swanton for fuel. The price of diesel was three cents a gallon more than at the trucks stops off the turnpike, but it was easy access to the fuel pump, and I didn’t have to wait for anybody ahead of me. Since I only needed 75 gallons or so, it wasn’t worth the hassle of paying a toll, getting off, fueling up, getting a new toll ticket, and getting back on the turnpike. I like saving a buck or two just as much as the next guy, but there’s something to be said for convenience too.

We made good time crossing Ohio, with a gentle tail wind helping. My Silverleaf VMSpc engine monitor said we got 8.4 miles per gallon between Elkhart and the service plaza where we stopped for lunch, about 30 miles west of Cleveland. That was running at 64 miles per hour with the cruise control on. 63 to 65 seems to be the sweet spot for our Winnebago, where we get the best combination of fuel economy and power.

I like the service plazas on the Ohio Turnpike. They are clean, have lots of room to park a big rig, good restaurants, and some even have back-in RV sites with electric for a few bucks a night!

I wish I could say I liked the turnpike too. Most of it was actually pretty good, but west of Cleveland we ran into a long stretch of very rough road, and I sure appreciated the Koni shocks that Redlands Truck and RV installed on our motorhome last year! The toll all the way across Ohio on Interstate 80 for our two axle motorhome and van was $31.75. Ouch!

We crossed into Pennsylvania, and immediately the road got better, and the terrain more hilly. Pennsylvania is one of my favorite states, in terms of beauty. The interstate in western Pennsylvania is a good road, and trees crowd right down to the edge of the highway, with occasional breaks to see the pretty countryside. 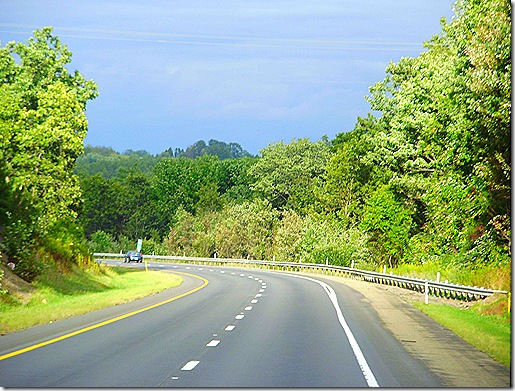 We passed lots of pretty farmland as we drove east. 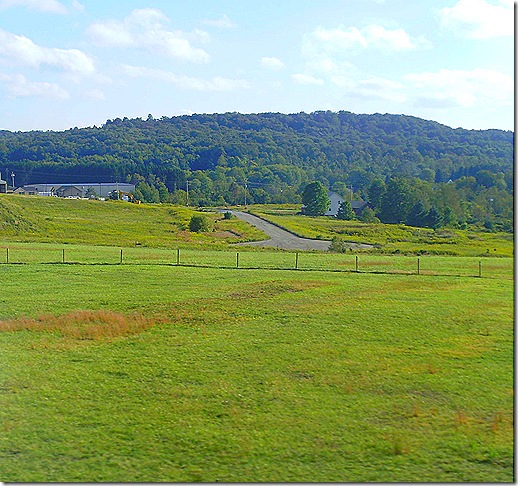 Before long we were in what folks back east call mountains, though my friends in Arizona might not agree. But the hills did take their toll on our mileage. We dropped down to 6.9 MPG.

Here is a nice shot of the Allegheny River that Miss Terry took as we passed over it. I didn’t even snivel about the bridge because the scenery was so pretty! 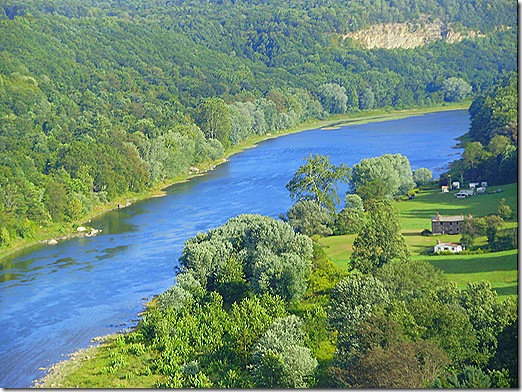 We had planned on about a 300 mile day, but that put us right at the state line, and it was still early, so we kept driving. We decided to spend the night at the Flying J in Brookville, and by the time we got there, I was getting tired. But they only have four designated RV parking sites, one of which is marked handicapped. There were big RVs in two of the other sites, with the one between them empty. But the way they were parked, it would have been a very tight squeeze to get in between them, if we could have made it at all. We checked out the truck parking area, which was about half full, but we really don’t like to use them if we can avoid it. They tend to be pretty noisy, and we don’t want to take a space that a trucker might need.

So we decided to push on another 42 miles to the WalMart SuperCenter at Clearfield, where we arrived just as the sun was starting to set. Miss Terry had called ahead to make sure RV parking was permitted, and the nice lady she talked to said no problem, just park on the outer perimeter of the parking lot. 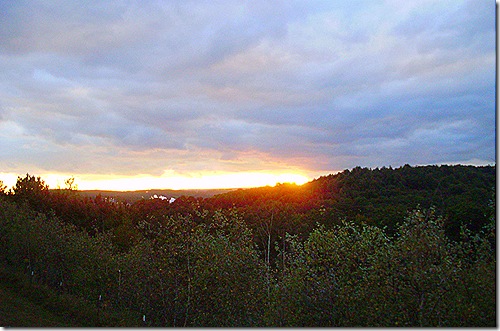 Here is an example of what not to do when you boondock at a commercial parking lot. He had both of his slides out, his TV antenna up, and notice the leveling jacks down! 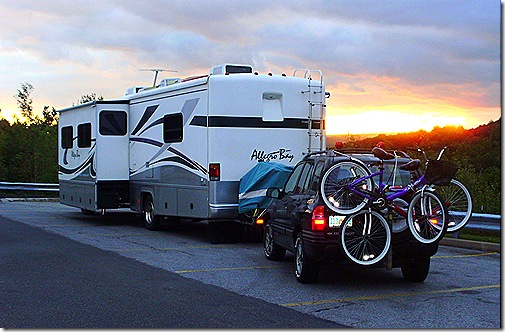 This fifth wheel was just as bad – jacks down, slides, out TV antenna up. They look like they’re camping! In both cases, their slide rooms are extended right into the roadway where cars are passing close by. 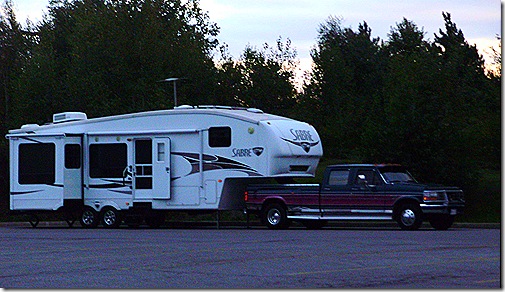 When we are parked like we are here, with our bedroom slide facing the outer perimeter, I’ll run the slide out at bedtime to make it easier to get in and out of bed. But we wait until bedtime, and we never extend our living room slide or jacks. That’s just poor manners.

We covered 420 miles yesterday, which was quite a bit more than we had originally planned, but the good news is that today we only have about 150 miles to go to get to the Thousand Trails preserve in Hershey, thanks to a a different route that the man on duty at the Pennsylvania Welcome Center recommended. So we should arrive and be settled in fairly early in the day.

Thought For The Day – Learn from the mistakes of others. You can’t live long enough to make them all yourself.