Thanks to everybody who e-mailed me saying get well. It seems to be working. I was in bed by midnight Saturday night. I just crashed and slept eleven hours. When I woke up yesterday I felt a lot better, and by day’s end I was almost back to normal. I knew I was feeling better when my appetite returned!

While I was so out of it, Terry was working hard, and managed to get all of the envelopes stuffed for the new issue.  I don’t know how that lady does it! Today we’ll drive back to Flagstaff to drop everything off at the mail service, and we’ll hit a few RV parks in Flagstaff and here in Williams, dropping off bundles of sample copies of the paper. Then we can relax and get back to having fun.

I’m afraid to even look at the news right now. In addition to the two forest fires burning around Flagstaff that I wrote about previously, two new fires have started. One burned over 3,000 acres yesterday, forcing hundreds of people to evacuate their homes, and the other, the fourth fire currently burning in the area, was still going strong yesterday evening. Here is the view of the smoke from one of the fires, looking out our RV windshield from our site at Canyon Gateway RV Park. 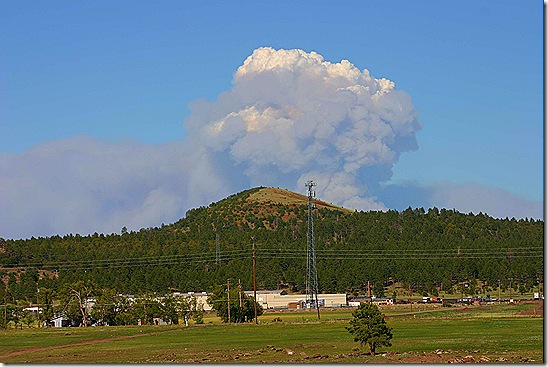 While Terry was finishing up the mailing yesterday, I uploaded the new digital edition for our online subscribers, and discovered an unexpected benefit of using the new InDesign page layout program. Previous PDF issues of the digital paper averaged about 22 MB in size, and InDesign lets me upload them with the same quality, at just under 6 MB, which means it opens and downloads faster for our subscribers.

Now that we have the paper done, we plan to head toward the California coast. We originally were going to stop in Kingman, Arizona for a day or so to visit my friend Mike Howard, but having just been sick, I don’t want to take any chance of passing anything on to him. So we’ll stop and abuse Mike’s hospitality another time.

That is if the wind dies down a bit. It’s been blowing hard ever since we got here, and I don’t like to drive the motorhome when I have to battle the wind every mile. What fun is that? That’s the great thing about the fulltime RV lifestyle, we don’t have to rush to get anywhere, because  wherever we are, we’re at home!

Bad Nick spent some time at the computer yesterday, posting a new Bad Nick Blog titled This Land Isn’t Our Land. Check it out and leave a comment.

8 Responses to “Mail Is Done, Time For Fun”