Today is Miss Terry’s birthday, but I got the present, because I get to spend the day with her! Terry is a very practical lady, so she thinks it’s just another day. But it’s pretty darned special to me.

Some women want jewelry or clothes for their birthday, but when I asked Terry what she wanted, she told me one of the new Dremel Trio power tools. I asked her why she wanted that, since we are done building a bus conversion, and she just looked at me, shook her head, and sighed “There’s always something.” I wonder what that meant?

Yesterday while we were in Flagstaff dropping off the new issue of the Gypsy Journal at the mail service, we stopped at Home Depot to get Terry her new toy, but they were sold out, it being the day after Father’s Day. So I promised Terry a rain check, then took her to one of her favorite places, Barnes & Noble bookstore. Okay, I confess, it’s one of my favorite places too. We can spend hours browsing, and usually spend more than we had planned to, but we justify it by telling ourselves that we don’t drink or smoke, or play golf, or gamble, so we deserve a treat now and then.

I know I have shown you pictures of forest fire smoke two days in a row, but just to put in in perspective, here is one more that Terry took in Flagstaff yesterday. It’s close enough to town that some folks we talked to were getting pretty nervous. 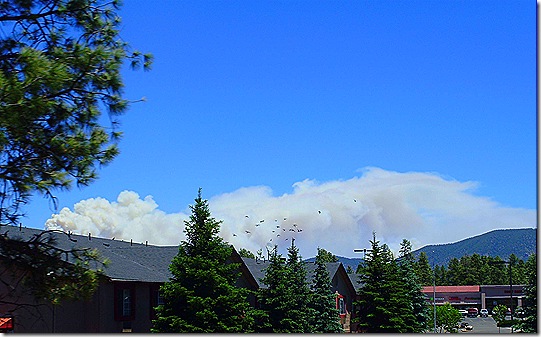 When we left Flagstaff, we stopped at the new Camping World in Bellemont to drop off a bundle of sample papers, then stopped at several RV parks around Williams doing the same. We got a chuckle out of this sign at the KOA. Somebody needs spelling lessons. But what can you expect from people who spell campground with a K? 🙂 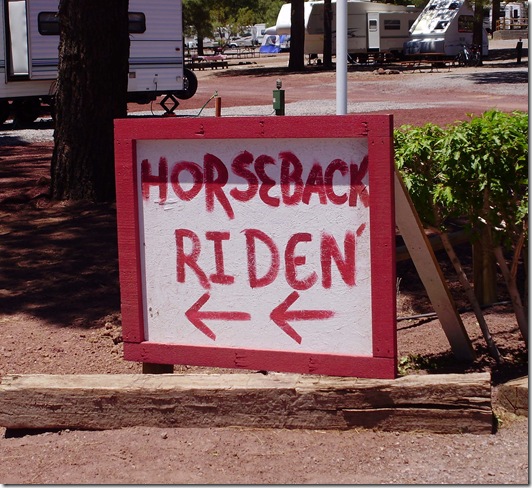 So what does a charming husband like me do for his special lady on her birthday? He drives her across the Mojave Desert in 100+ degree temperatures! And if that were not enough, tonight I hope to be in Bakersfield, California, where she has her choice of dinner at the Flying J truck stop or the Jack in the Box restaurant next door! Hey, do I know how to treat a girl right or not?

I’m pretty much recovered from my bout with the flu, but my energy level still doesn’t feel quite up to par. It’s about 450 miles from here to Bakersfield, so we have a long day of driving ahead of us. And if we get tired or run into any delays, I have a couple of alternative stops in mind.

We have several readers in Bakersfield who have asked us to stop in for a visit, or invited us to dinner, but this is just a quick overnight stop, since we have to be at the Elks lodge in Oceano Wednesday by mid-day to claim an RV site before somebody else snags it out from under us.

We plan to be in the Oceano/Pismo Beach and Morro Bay area for a few days, then we’ll go up to the Thousand Trails preserve in Morgan Hill for a week or so, where we have arranged tours of a few places to write about for the next issue.

Happy birthday, Terry. I love you with all my heart, my darling.

Thought For The Day – One man all by himself is nothing.  Two people who belong together make a world.