We left the Oceano, Elks campground a little after 9 a.m. and headed north on U.S. Highway 101. Morning fog was lingering over the coast, and according to the dashboard thermometer in my Winnebago motorhome, the outside temperature was 60 degrees.

As we moved further inland, the fog dissipated and the temperature began to climb. 45 miles north, in Paso Robles, it was 75 degrees, and it continued to climb all day long.

Before long we were in the Salinas Valley, known as the Salad Bowl of the World due to the huge amounts of produce grown here. The climate is perfect for growing everything from strawberries, lettuce, tomatoes, and spinach to broccoli, cauliflower, and celery. 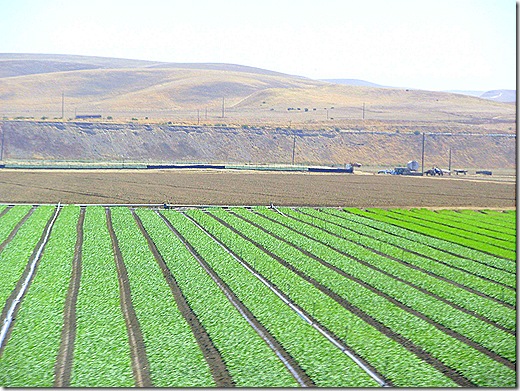 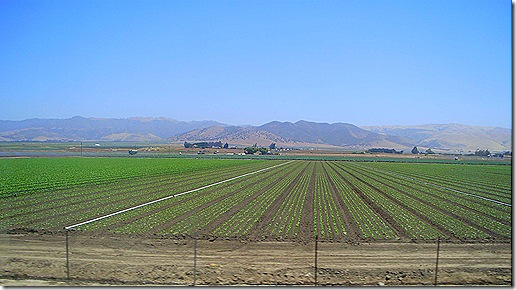 And grapes. Lots and lots of grapes. The entire central coast region of California seems to be one massive grape arbor, and wineries abound. 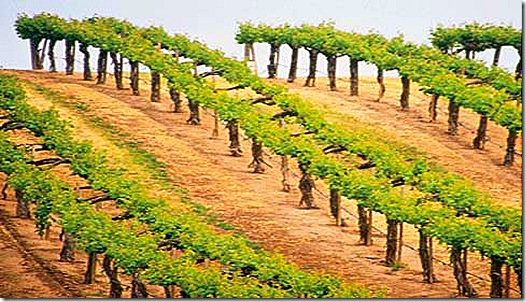 This is Steinbeck country, made famous by the author of such American classics as Of Mice And Men, The Grapes of Wrath, East of Eden, and Cannery Row. I cut my reading teeth on John Steinbeck’s works, and I believe his road odyssey Travels With Charley is responsible for the wanderlust that I have carried all of my life. While we’re in the area we plan to tour the National Steinbeck Center in Salinas, and I’m really looking forward to it.

Near Salinas we saw a heavy curtain of fog and low clouds, the result of rising inland temperatures drawing the marine layer in off Monterey Bay.

Traffic picked up considerably in Salinas, and continued all the way into Morgan Hill, where we left the highway and drove about five miles on local roads to the Morgan Hill Thousand Trails preserve. When we arrived at the ranger check-in station, it was 97 degrees. We had traveled 180 miles, but it was like we were in a different world altogether. A very hot, different world.

We have never been to this Thousand Trails campground before, but it is typical of most of the Thousand Trails we have been in – gravel roads and RV sites, 30 amp water and electric, a dump station, and quite a few electrical pedestals covered up because they don’t work. At too many of the preserves we have been in, upkeep and maintenance seems to be a low priority. 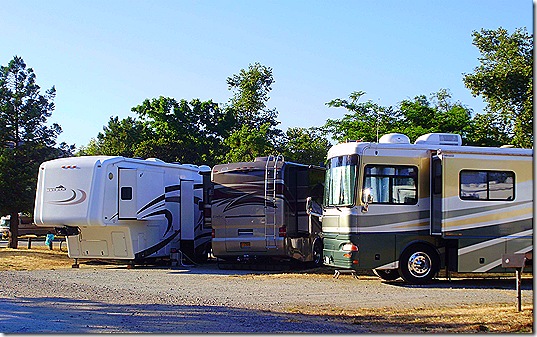 We noted a sign at the campground’s entrance saying that Thousand Trails is now open to the general public, making me question why we continue to pay our annual dues. And to wonder even more, why do people continue to shell out big bucks for new memberships. We got our used nationwide Thousand Trails/NACO membership for $100, so if we ever decide to walk away from it, we won’t lose anything. It’s a subject we have to do some thinking about in the not too distant future.

This campground has a lot of trees, but a large open area as well, so we had our choice of either a shaded site or one in the open. With the holiday weekend coming, a lot of families with kids will be here, and they tend to gravitate toward the shaded areas. I’ll trade a little bit of shade for a quiet spot and a good view of the sky for TV reception any day. That’s why Winnebago includes awnings and air conditioners with their motorhomes.

The campground was pretty full, but we had no problem finding a level, pull-thru site with a good view of the sky for our roof mounted automatic Winegard TV dish. As soon as we were plugged in, we fired up our basement air conditioner to cool the interior of the motorhome down. 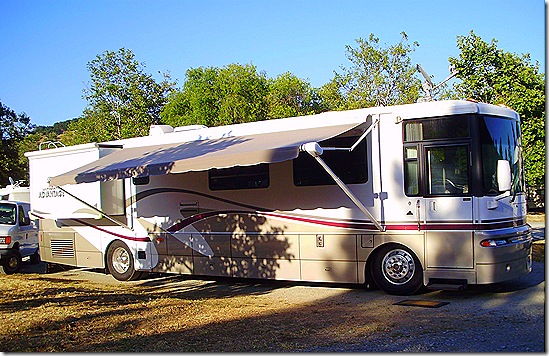 But first, we made a stop at the dump station. You know that old saying “sh!% happens?” Well, It happens to even the most experienced RVers. I don’t know what went wrong, but when I opened the plastic cap on our sewer connection to put the hose on, a big gush of nasty flew out. I jumped back in time to get out of the way, and quickly slapped the cap back on and secured it.

Could I have left the valve open? I doubted it, since I had dumped a week ago when we left Williams, Arizona, and I had seen no indication of a problem since then. A quick check showed the valves to both the black and gray tank were closed securely, so all I can guess is that we may have a seal leaking. I carefully removed the cap again, ready to get the sewer hose in place in a hurry, but whatever was in the short section of pipe had already spilled out. I finished dumping, cleaned up the mess, and made a note to watch the valve and see if this was a one time oddball occurrence, or a problem that must be dealt with soon.

We’ll be here a few days, maybe as much as two weeks. Definitely until after the Independence Day holiday, because we learned early in our fulltiming life that we want to be off the road and in a campsite well before any summer holiday. There are a few things we want to see and do in this area, before we head on down the road to our next adventure.

Thought For The Day – A father is a banker provided by nature.