One of the greatest things about the RV lifestyle are the many wonderful friends we have made. As with most fulltime RVers, many times we find that these friendships are deeper and more fulfilling than those we had with folks back in our old lives, living in sticks and bricks.

Like our lifestyle itself, RV friendships are different than other relationships we may have had in the past. Sometimes we only see our RVing friends once or twice a year, depending on where our travels take us. But we keep in contact with e-mail, on social networking sites like Facebook and Twitter, by reading their blogs, and through the RV grapevine.

There are times when we will make plans to meet up with fellow RVers someplace for a day or a week, and other times when the meetings are more serendipitous. We have pulled into and discovered friends we have not seen in months parked in the site next to us, and we have stopped for lunch at a highway rest area and found friends parked there doing the same thing. Once, in Indiana, we were at a fuel stop on the Indiana Toll Road when our friends John and Margie Conda happed to pull up to the fuel island next to us. Things like this happen so often that we’re not even surprised when they do anymore.

Yesterday, we had lunch with two of our very special RV friends, Jerry and Suzy LeRoy. They have a lot at the Escapees co-op in Benson, about 35 miles south of Tucson, and when they learned that we were going to be here for a few days, they called and suggested we meet for lunch.

We decided on Mimi’s Cafe at Wilmot and Broadway, on the east side of Tucson, because it is closer to Benson than the Mimi’s on the north side of town near Tucson Mall, and only a mile or so from my cousin Beverly’s apartment.

We met at 1 p.m. and had a wonderful lunch as we talked about our different adventures since we last crossed paths, compared notes on family relationships, and solved most of the problems of the world. Before we knew it, our luncheon had stretched out for three hours, and our friends had to get on the road to get back to Benson. Time really does fly when you’re having fun!

Here is a picture of Jerry, Suzy, and Miss Terry outside the restaurant just before we parted company. 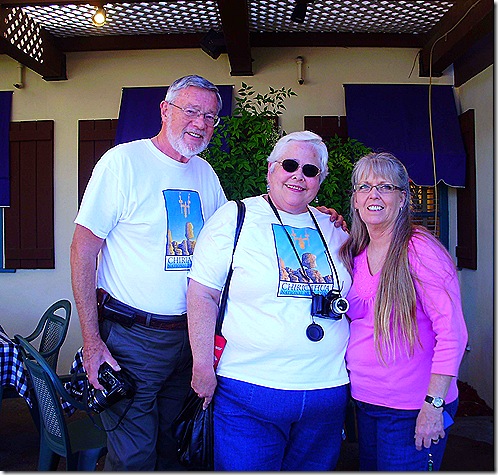 I asked Jerry and Suzy if they would take a bundle of Gypsy Journals to the Escapee park for us, and they were happy to oblige. Whenever we can pass a bundle of sample papers on to RVing friends to distribute in their travels, it helps us spread the word about our efforts. Many times when we receive a new subscription order, it includes a note saying that they picked up a copy of the paper at such and such RV park, someplace where we’ve never been.

After we left Mimi’s, we stopped at Jo-ann Fabrics so Terry could pick up some yarn she needed for a project, and then we went to Beverly’s place, where I spent the next three hours trying to delete cookies and spyware in an effort to speed up her laptop computer, which has slowed down to slightly less than snail speed.

I wasn’t getting anywhere, so I called another RVing friend, my pal Greg White, and asked for suggestions, since Greg made his living resolving computer issues for folks. He suggested some things to try and clean the laptop out, but I wasn’t making much headway. Since Beverly has a medical appointment on our side of town today, we didn’t want to keep her up too late while I struggled with the laptop, so we called it a night and headed home. I’ll take another shot at her computer today or Saturday.

Back at Tra-Tel RV Park, we watched some TV, answered a few e-mails and I wrote my blog post before we headed for bed.

Today, after Beverly’s doctor appointment, we are getting together for lunch with two more of my cousins, Vivian and Sharon, who also live here in Tucson.

Bad Nick is not nearly as much a social butterfly as I am, so he spent yesterday writing a new Bad Nick Blog post titled Did He Push Humpty Off The Wall Too? Check it out and leave a comment.

Thought For The Day – Any fool can criticize, condemn, and complain, and most fools do.