I got the new issue of the Gypsy Journal wrapped up yesterday, so today we’ll make a run to Flagstaff to drop it off at the printer. It’s about 120 miles each way, and while we’re in the “big city” we’ll stop at Sam’s Club to pick up some supplies. This is our Eleventh Year Anniversary Issue, and it sure feels good to reach another milestone!

My granddaughter Destiny had her own milestone yesterday, when she turned three years old. We had cake and ice cream, and wondered again where little ones get so much energy! Here’s the birthday girl with her cake. 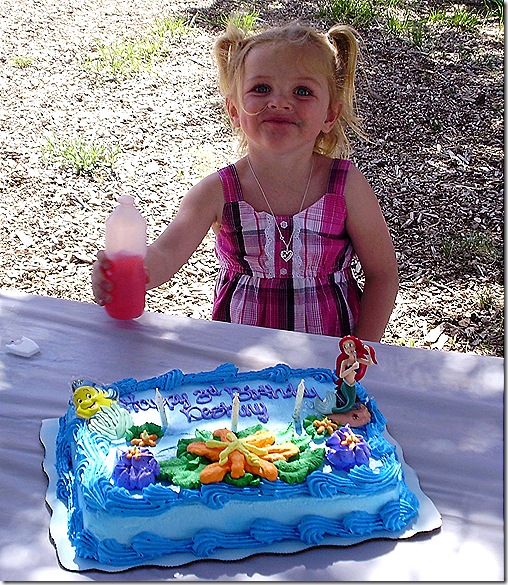 And here’s a picture Miss Terry took of my daughter Tiffany and me. You can tell that she didn’t get her good looks from her daddy. 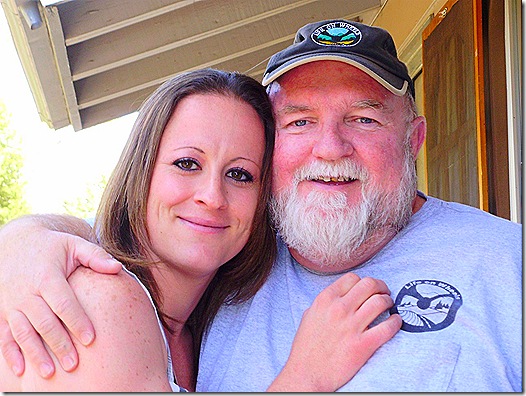 We have never liked the day/night shades that come on most RVs, and since a couple of them need restringing, we decided that rather than deal with that, we’d replace them with wooden blinds. Miss Terry has spent a lot of time online comparing options, and over the last few months we had stopped at several home improvement stores to see what we liked and what fit our motorhome.

After we left the birthday party, we stopped at Lowes and placed an order for the blinds, which should arrive in about two weeks.  We chose Lowes because the pricing was comparable to Home Depot across the street, but Lowes gives veterans a 10% discount. I appreciate that, and try to spend my money with stores that support our troops and vets.

When I handed the clerk my credit card to pay for the blinds, it was declined. Huh? No way. I told her that there must be a mistake, so we tried it twice more, and the card was declined both times. That’s really embarrassing. I used a different card, and the minute we got back to the Winnebago, I called my bank to see what the problem was, since I knew I had the money available.

After shuffling me between a couple of different customer service representatives, they told me that yes, my account is in fine standing, but they had declined the charge because our billing address is in Nevada, and this was a “large purchase” in Arizona. “We do this to protect you,” the young lady on the other end of the phone told me.

This has happened to us before, and it really ticks me off. I always feel like telling them that I’m 57 years old, I spent more time in uniform than they spent in high school, and I’m heavily armed to boot. I can look after myself, so stop protecting me!

I pointed out to the young lady that the name on my account includes the words “RV Travel Newspaper,” which might imply that we travel, and that we frequently make “large purchases” from Arizona to Florida to Michigan, and points in between.

Once we got that resolved, we had a quiet evening at home. Miss Terry gave the new issue a final proof reading and I made the changes necessary, then we had a light dinner and I posted a travel story to the RV Net Blog while we watched a movie on the Hallmark Channel.

Thought For The Day – Closed minds always seem to be connected to open mouths.

12 Responses to “Stop Protecting Me!”