Can you believe that we had to work on Easter Sunday? And we didn’t even get holiday pay? Sometimes it’s hard being self-employed gypsies. Than again, if you have to work, we’ve got a pretty good gig going for ourselves.

We go to the places other people can only dream about, or have to squeeze in on a hurried vacation, we spend all the time we want there, they usually give us complimentary admission, and then we get paid to write about it! No wonder I can’t wait to wake up and go to work every morning!

Yesterday I got to cross another item off of my personal bucket list, when we rode the Grand Canyon Railway to Grand Canyon National Park. This is a trip I have wanted to take for a long time, and one everybody should make! 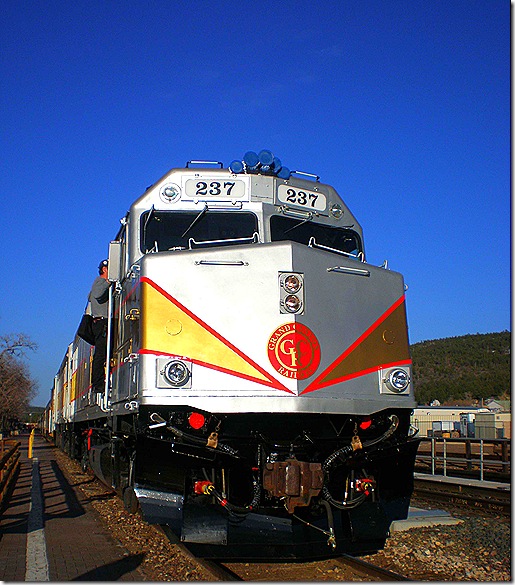 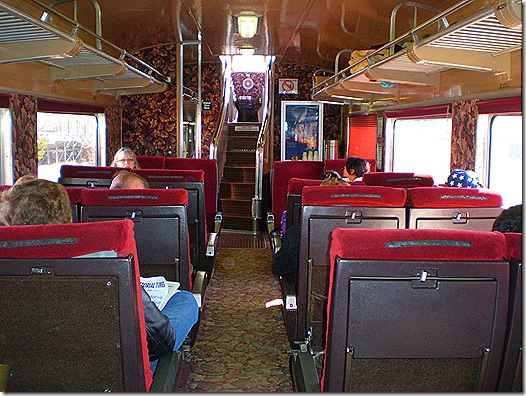 Our car had a second level glass dome compartment where passengers could get a bird’s eye view of the world passing by. 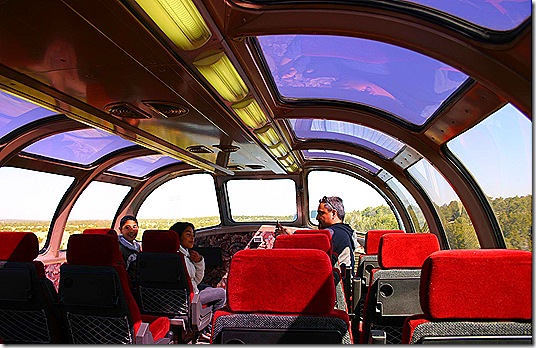 They even had a complimentary continental breakfast, and each car had a hostess to attend to our every need. How cool is that? I like traveling First Class! 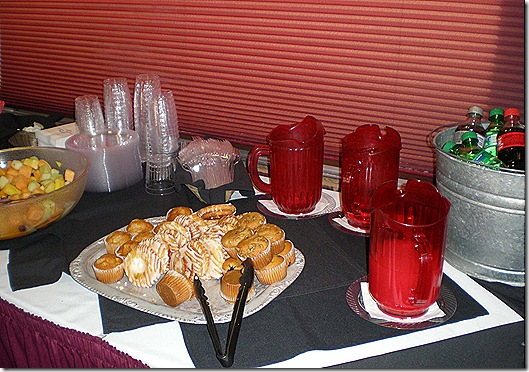 While we riding up to the Grand Canyon, Navajo musician Clarence Clearwater  entertained us with songs and jokes like: What do you call a camel that has lost his hump? Humphrey! 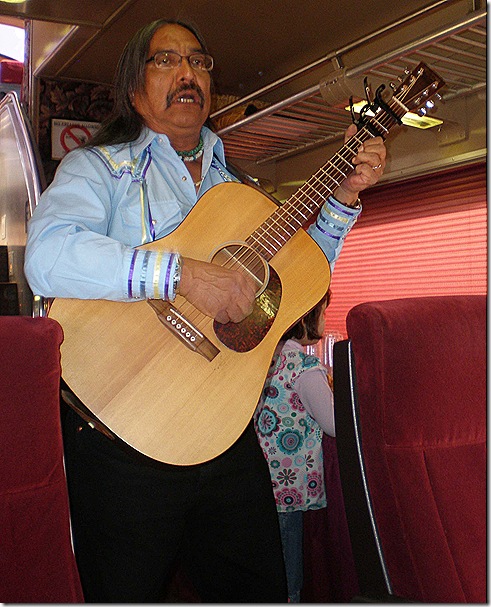 Once we arrived at the Grand Canyon, our first stop was the Verkamp’s Visitor Center. I got my National Park Passport stamped, we browsed the books and artwork on display, and picked up some brochures about Grand Canyon National Park.

Then we set out along the 1.75 mile long Rim Trail, a paved walkway that offered magnificent views of the spectacular canyon every step of the way. Most of the trail is pretty easy walking, and there are plenty of benches spaced along its length to give you opportunities to rest. 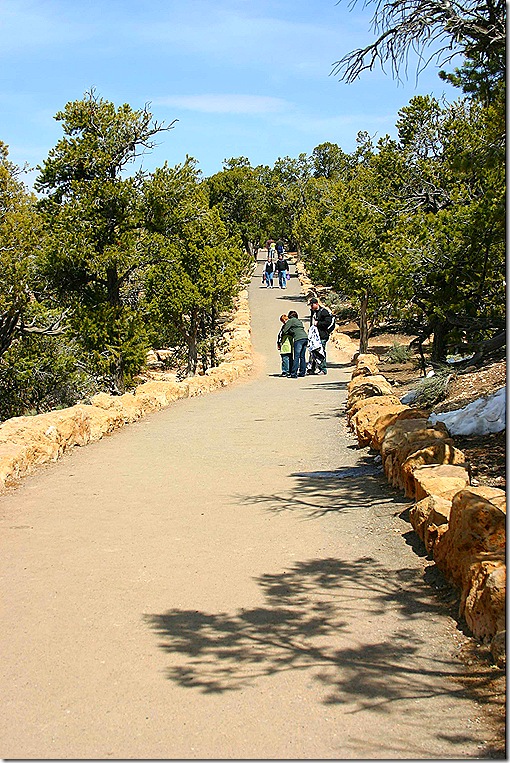 A few short stretches are a bit steep, and I was breathing hard a time or two. I told Miss Terry it was because of the thin air at this high altitude. 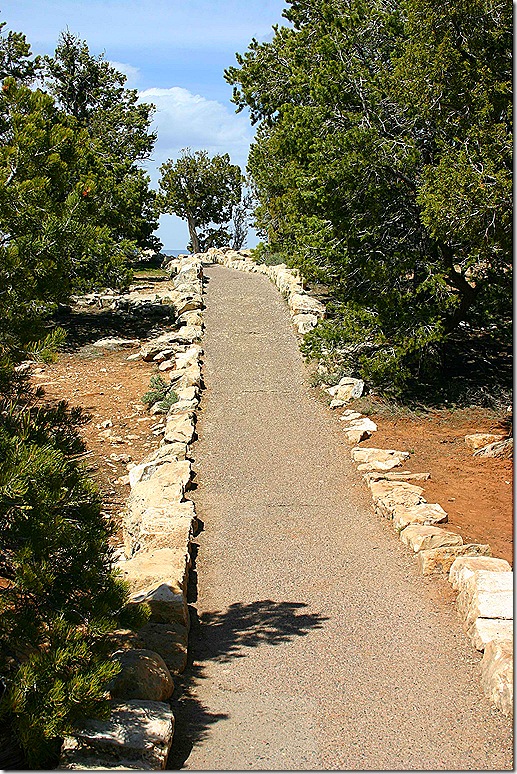 There was a lot of haze in the air, especially earlier in the day, and the colors of the rock formations seemed muted from what I remember in past visits to the Grand Canyon, but it sure is a wonder to behold! 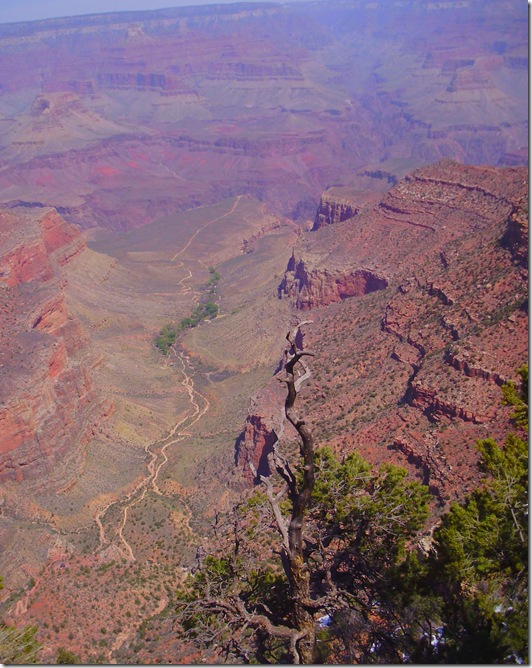 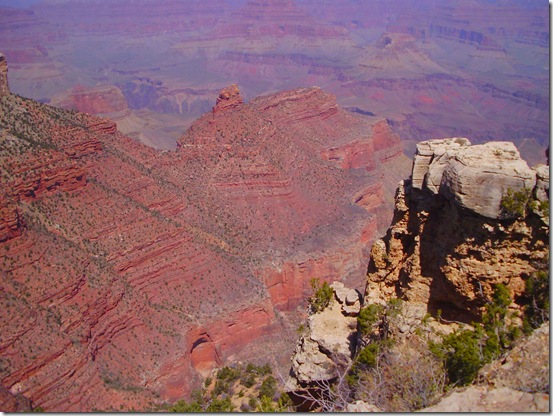 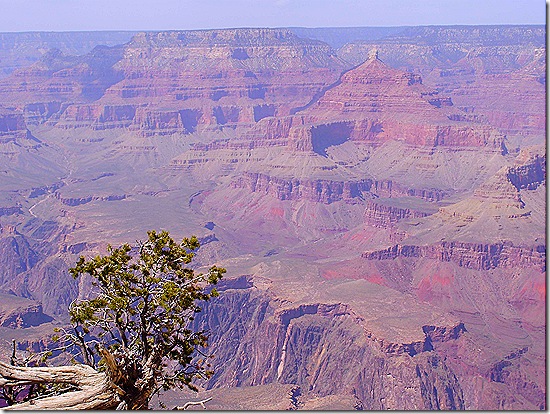 The wind was blowing hard all day long, and some of the gusts were downright treacherous, but it didn’t stop people from going out on points where I wouldn’t have been comfortable even on a calm day. 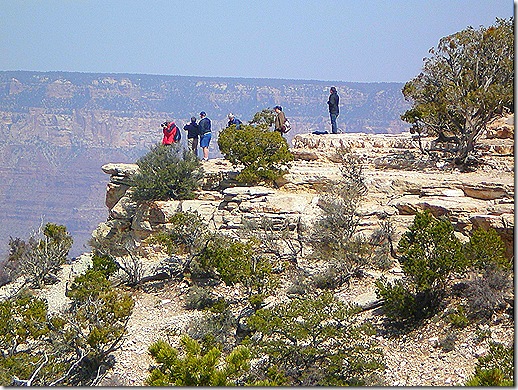 Someone asked me how I could have a fear of heights, when I used to fly around in helicopters and puddle jumper airplanes, and even jumped out of a perfectly good airplane or two. The answer is simple – Back then I was young and foolish, and I had wings and a parachute!

We were both pretty tired by by the time we finished the Rim Trail, and the wind was getting even stronger, so we walked down to the road and took the free shuttle bus back to the train depot. Then we hiked back up 44 steps to the viewpoint by the Hopi House, which was completed in 1905. 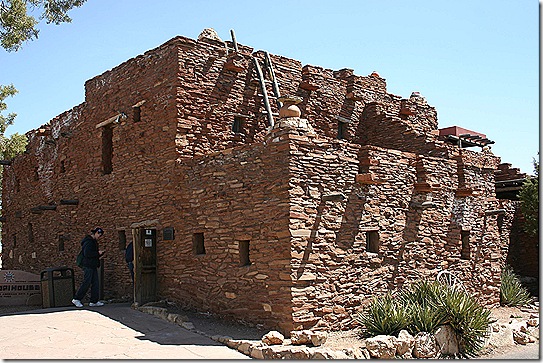 When we got there this Navajo Hoop Dancer was performing. What an impressive demonstration of his culture! 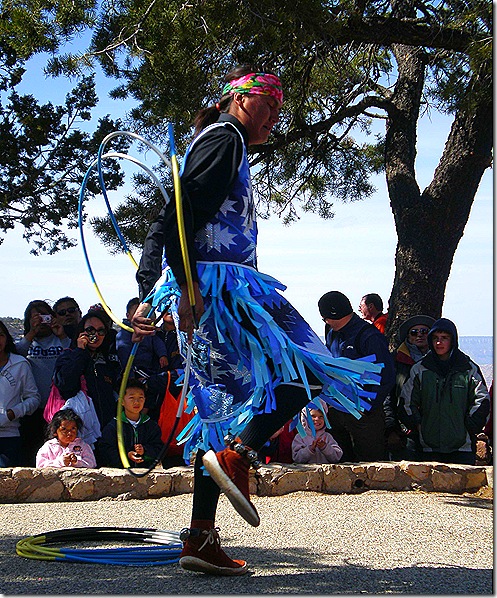 We also got to see this young man doing his Eagle Dance. His costume reflects the Native Americans’ strong bond to Mother Earth and the animals we share it with. 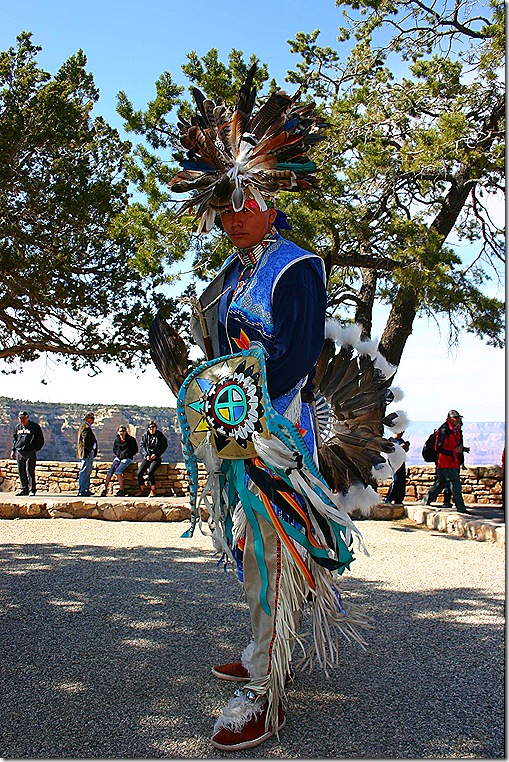 We had about 3 1/2 hours at the Grand Canyon, and then it was time to board the train for the return trip to Williams. The 65 mile long train ride takes just over two hours.

We had some excitement along the way, when Miss Terry spotted a huge herd of elk out her window. I have lived in the Rocky Mountain West for most of my adult life, and I have spent a lot of time in the outdoors, but I have never seen so many elk in one herd. There must have been between 75 and 100 animals.

That wasn’t the only excitement we had. We got robbed! But unlike the robbery we had last December, this was all part of the trip. The “robber” told more jokes than the loot he “stole.” 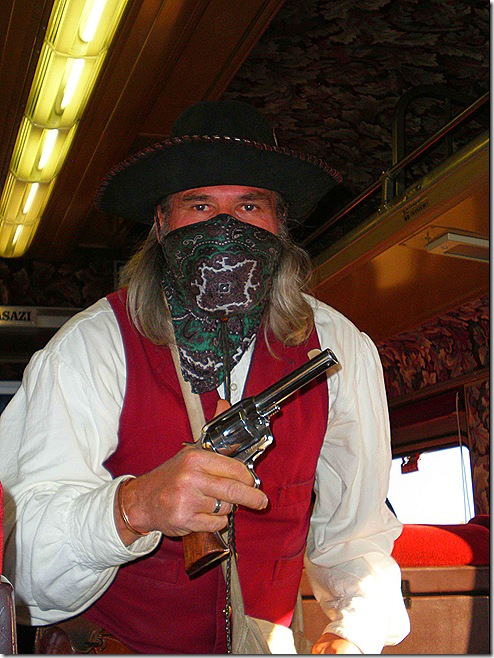 He and his partner had hardly moved on to plunder the next passenger car when the local Sheriff showed up in hot pursuit. But, he had to stop and tell a joke or two of his own first, of course! 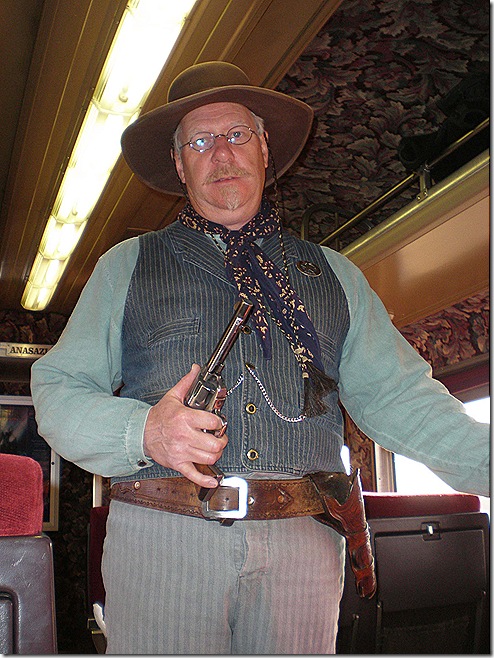 We arrived back at the depot in Williams about 5:30 p.m., worn out from our long day of playing tourist, but thrilled with all we had seen and done. I just wish the wind hadn’t been so bad. I’m still rubbing grit out of my eyes.

We had hoped to drive the final 150 miles or so to Show Low today, where we’ll be spending some time visiting my daughter and her family, but the high winds have only increased. Today they are predicting gusts up to 60 miles per hour. So we’re playing a waiting game. If things calm down, we’ll make a run for it. But if the wind keeps up, we’ll just snuggle down here in Williams for another day, and wait until it’s safe to travel.

Thought For The Day – The man who follows the crowd will usually get no further than the crowd. The man who walks alone is likely to find himself in places no one has ever been.

10 Responses to “Easter At Grand Canyon”