Nick's Blog » Over The Hump To Pahrump

In our nearly eleven years as fulltime RVers, we have stayed at many of the Escapees RV club campgrounds, from Washington state to Florida, Texas, Missouri, Tennessee, and Arizona, to name just a few. One we had never visited was the Escapees Pair-A-Dice co-op in Pahrump, Nevada.

Pahrump is about 50 miles west of Las Vegas, via State Route 160, a good, mostly two lane road that passes through the Toiyabe National Forest, climbing from 2300 feet in Las Vegas to 5500 feet at Mountain Springs Summit, before dropping down to about 2300 feet in Pahrump. Locals call this drive “going over the hump.

Yesterday, after an excellent brunch at Blueberry Hill Restaurant, one of a small chain here in Las Vegas, we took the trip “over the hump” to Pahrump. I’m sure glad we never tried to make this trip in our old MCI bus conversion! The V-8 engine in Greg White’s Dodge pickup was getting a workout as we made the climb.

We know a lot of folks who really like Pahrump because it is quieter and much more laid back than busy Las Vegas. But I have to be honest and say that we were just not impressed. There is little, if anything aesthetically pleasing in the community, just a lot of businesses stretched out along the main highway, a casino or two, a scattering of RV parks, and lots of subdivisions springing up out of the desert.

The office was already closed for the day, but we drove through the Escapees RV park, which was pretty full. But the few people we saw out and about didn’t seem too welcoming as we drove past and waved. Basically, the campground is all gravel and dirt, with some desert landscaping. It’s just not our cup of tea.

We did stop to check out another RV park that had been recommended to us, Terrible’s Lakeside Casino RV Park, a short drive off the main highway, and not far from the Escapees park. 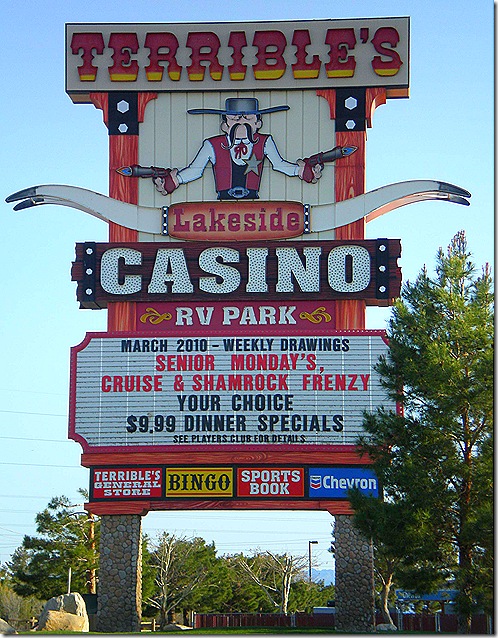 This place was was pretty impressive. Many of the RV sites are situated around a small man made lake, there was plenty of grass, and lots of trees to provide shade. The view of the snowcapped mountains in the distance added to the ambience. The only drawback some people would find is that is that there were a lot of kids running around, though they all seemed to be well behaved. 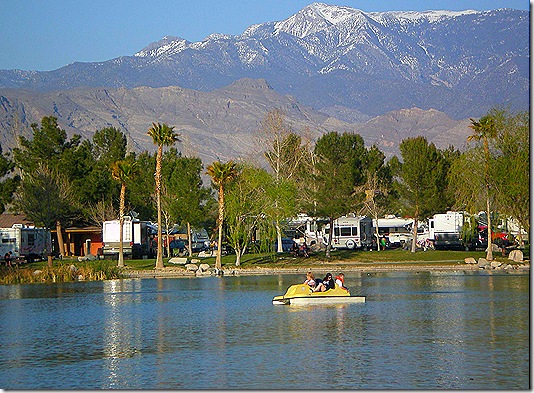 Pahrump is in Nye County, where prostitution is legal, and Pahrump is home to two legal brothels, the Chicken Ranch and Sheri’s Ranch, which are located next door to each other.  Well, who can go to Pahrump and not at least drive by to check something like that out?  Not us, obviously. 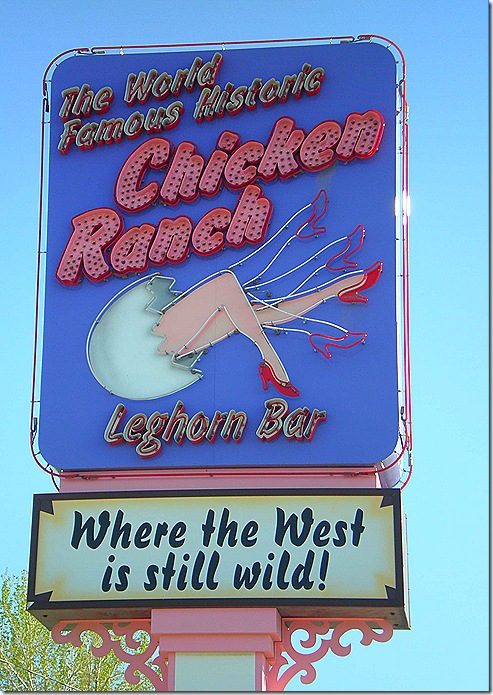 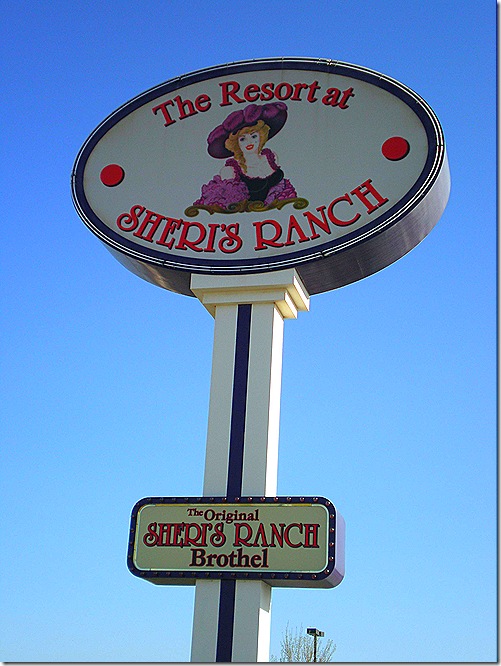 We stopped to take pictures of both houses of ill repute, and noted that both offered free tours, and that ladies are welcome. Terry and Jan decided that seeing the places from the road was probably just fine, thank you very much! 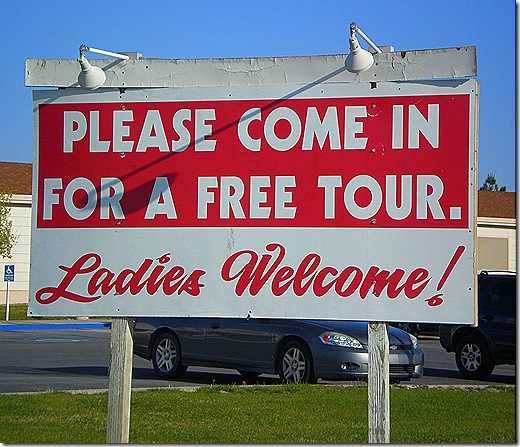 Business seemed to be rather slow, there were just a few cars in the parking lot at either place, and I don’t know how many were there just to shop the souvenir stores that both businesses have. But if you saw me there, that’s all I was doing, shopping for souvenirs! That’s my story, and I’m sticking to it! 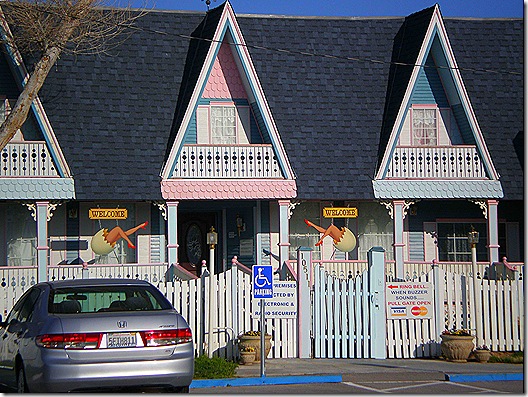 Actually Miss Terry is pretty open minded, and said I could go in and take the tour. But then she said something about me having to go into quarantine for 30 days afterwards, so I decided to pass.

Terry has the sharpest eyes of anybody I have ever known, and she constantly amazes me by pointing out wildlife I would never have seen as we zip down the highway. She spotted this hawk in a tree at the Chicken Ranch, and I told Greg it was probably a chicken hawk.  Hey, I have to get my material where I find it! 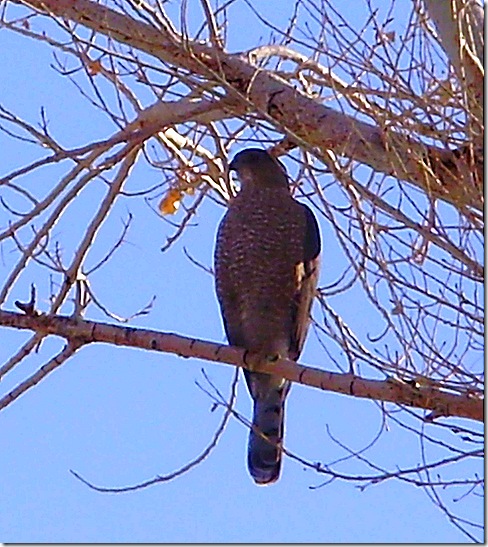 All too soon, or not soon enough, depending on whom of us you ask, it was time to get on down the road. So we waved goodbye to the brothels and headed back to Las Vegas. Judging by their signs, they’re friendly folks, aren’t they? They welcomed us to uhhh… return. 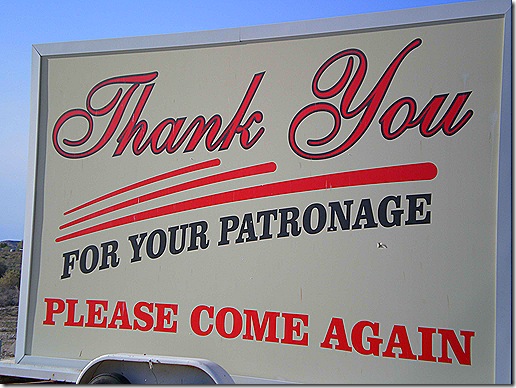 Bad Nick Doesn’t have time for such nonsense, so while we were out exploring the seamier side of life, he was home writing a new Bad Nick Blog titled Dumb A$$ Report, Vol. 2. Check it out and leave a comment.

Thought For The Day – When everything’s coming your way, you’re in the wrong lane.

12 Responses to “Over The Hump To Pahrump”