Yesterday Terry and I, along with Greg and Jan White, drove about 30 miles down to Boulder City, Nevada to stop at Bee’s Mail Service, which has handled our business mail forwarding ever since we hit the road. A new owner, Jean Wilson, bought the company a while back, and we wanted to stop and introduce ourselves, and put a face with the name. Jean is a very friendly lady with a strong business background, and we look forward to a long working relationship with her.

Boulder City was the base camp for the workers who built Hoover Dam back in the 1930s. At the time, it was the world’s largest concrete structure, and a statue at the dam honors the men who undertook this gargantuan task. 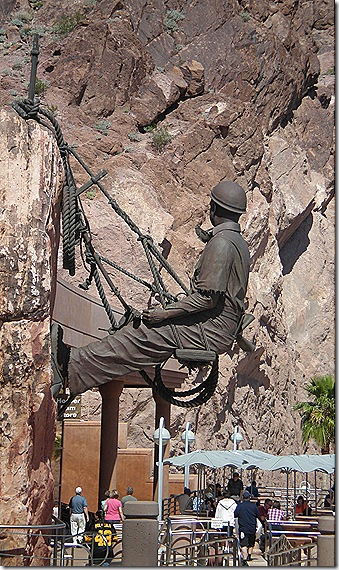 Another major construction project has been going on at the dam for a few years now, construction of a bridge that will bypass the current narrow, winding U.S. Highway 93 that crosses the dam, and is no longer adequate to handle the 14,000 vehicles that travel it daily. 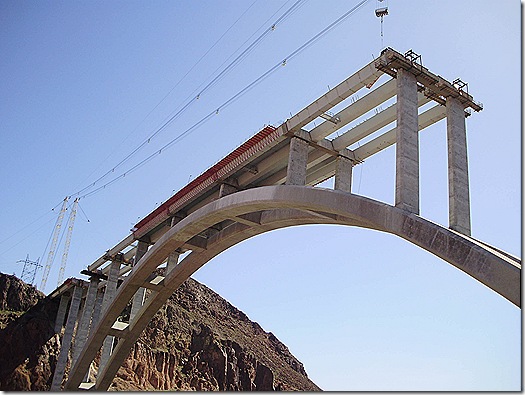 Looking up from the ground, I can already tell you that this is one bridge I won’t be driving over, I don’t care how strong the supporting structure is. I’ll take the longer detour south through Searchlight and Laughlin and then over to Kingman, Arizona. 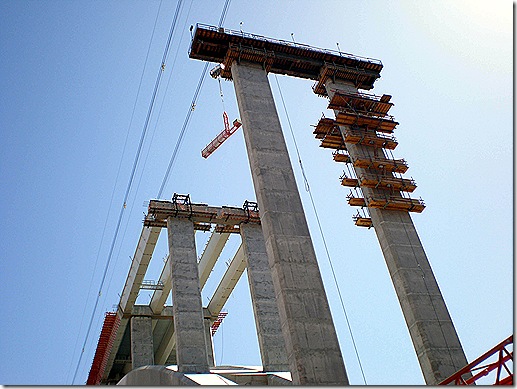 The project’s website says that the bridge will be finished by September of this year, and the bypass will be carrying traffic by November. I don’t know, it looks like there is still a lot of work to be done before that happens.

We wanted to see the progress on the bridge, so Greg drove us down to the dam, inching along in a long line of traffic moving at a snail’s pace. That was okay with us, we all four get along well, and we enjoyed the views of Lake Mead as we drove into the canyon. 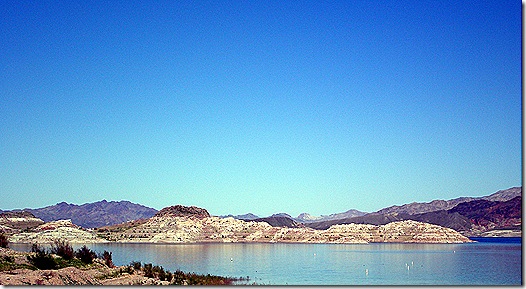 I said that this area has a lot of bighorn sheep, and no sooner had I spoken than eagle-eyed Miss Terry spotted several of the animals lounging on a ridgeline a couple of hundred yards from the highway. We all scrambled for our cameras, but about then the traffic started moving and a horn honking behind us made us miss the shot.

Greg made a U-turn at the dam and we drove back up to the Lake Mead Visitor Center for a potty stop, and to take some photos of the lake’s deep blue water. Then we drove down to the shore, where we saw this sailboat heeled over to the side, barely moving, with little breeze to fill its sails. 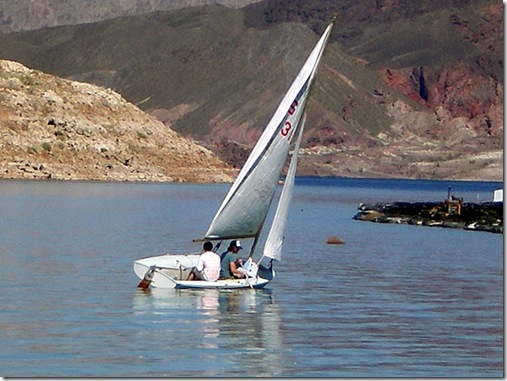 Our next stop was the Camping World in Henderson, where we didn’t find anything that we couldn’t live without. By then it was late afternoon and we were all getting hungry. Jan was in the mood for Mexican food, so we stopped for an early dinner at Lindo Michoacan in Henderson, which was named Best Mexican Restaurant in a Las Vegas newspaper survey.

As I’ve said before, Miss Terry loves Mexican food, but after living in Arizona for years, she is a bit of a snob about it, and it takes a lot to impress her. I asked her how Lindo Michoacan rated on a scale of 1 to 10, and she gave it a 25! Our waiter was very attentive, the portions were huge, and the view of Las Vegas from the windows that make up one wall were magnificent. 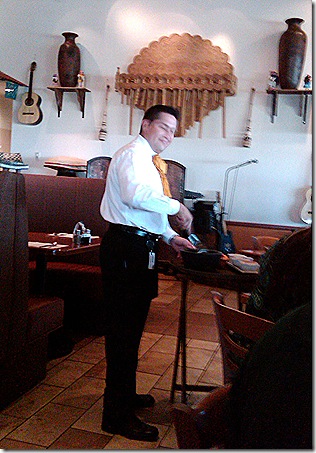 As you can see in this photo taken with my Blackberry, Jan, Terry, and Greg look well fed. Even after eating as much as we all could, there was still enough left over to take home for lunch today. Jan and Terry assured Greg and I that this was a place we’d be going back to before we left the area! 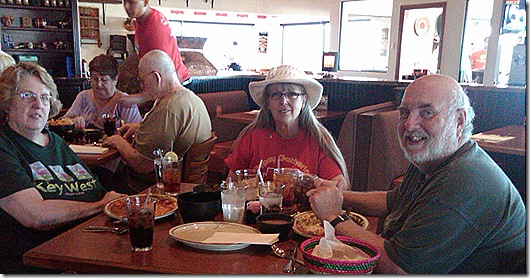 Thought For The Day –You may have a screw loose, but that’s okay, you still have that screw, you haven’t lost it .

5 Responses to “I’ll Take The Detour”