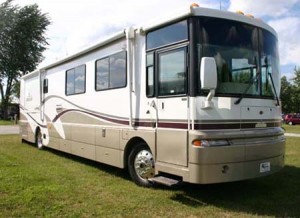 Readers have been asking me for an update on how we like our new to us Winnebago Ultimate Advantage motorhome, now that we have lived and traveled in it for almost six months, as compared to the MCI bus conversion we built and lived in for over eight years.

Overall, we are both very happy with the Winnebago, though we have had to make a few adjustments. We love having the extra room the bedroom and living room slides give us. However, we actually had more inside storage room in the bus, due to the extensive cabinetry that Miss Terry designed and built for it.

But, even though we had three huge bays underneath the bus, we still have more basement storage in the Winnebago than we did with the bus. The reason for that is that one entire 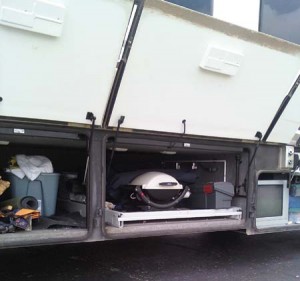 bay of the bus was used for our holding tanks, which do not take up bay space in the Winnebago, and also because half of one bay in the bus held our house battery bank and inverter, and half of the third bay held our twin propane tanks, plus the fuel tank for our Onan gas generator.

We had a huge gray/black waste tank in the rear bay, and when we were parked in a campground with full hookups, we could turn a diverter valve and let the gray water run directly into the sewer, which meant we could go a long time without dumping the waste tank. In the Winnebago we have to dump the black tank about every seven days. We could probably stretch that if we were boondocking and being very careful, but the difference in tank capacity is really noticeable.

After our first night in the Winnebago, we could really tell the difference in insulation between the two rigs. We built a lot of insulation into the bus, and it was both quieter inside, and much warmer (or cooler, depending on the season), than the motorhome. But, the bus had a single rooftop air conditioner that was vented directly inside, which was much nosier when running than the ducted basement air conditioner in the Winnebago.

After driving across the country in the Winnebago, I don’t know how I lived with the tired old Detroit diesel in the bus for so long. These days I think nothing of cruising up long grades at 60 miles per hour, passing eighteen wheelers, instead of crawling along in the right lane with the radiator misters on at fifteen miles per hour, hoping some eighteen wheeler didn’t run over us. The Winnebago definitely has more power and gets better fuel mileage than the bus did, but I find that I don’t have as much confidence in the Winnebago’s exhaust brake as I did the Jake brake in the bus when going down steep grades. 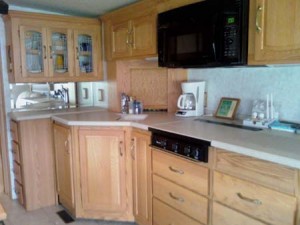 Everything in life is a tradeoff. Terry misses the household style refrigerator, gas range with oven, and separate washer and dryer that we had in the bus. But, the larger kitchen area and the spacious bedroom/bathroom layout of the Winnebago is much more comfortable. She’s learning to live with the Winnebago’s microwave/convection oven, and the Splendide RV washer/dryer combo.

When you add in a lot of creature comforts and handy accessories, such as cruise control, automatic HWH leveling jacks, automatic Winegard rooftop TV dish, two gas furnaces, and a heat pump, for us the Winnebago comes out the winner.

Several readers have asked us if we will be at the Winnebago Grand National Rally in Forest City, Iowa in July, if we’ll be vendors, and if I’ll be presenting any of my seminars at the rally. The answers are yes, probably, and I don’t know. Yes, we plan to attend the rally, we’ll probably be vending (I haven’t registered yet), and I don’t know if I’ll be presenting any seminars. I haven’t been invited to do any, and the inquiry I sent was never answered. But if you are a Winnebago owner and will be at the rally, and would like me to do a seminar or two, why not give the folks in Forest City a shout or an e-mail? They have no idea who I am, since we have not had our coach that long, but if they see there is an interest, they might invite me to do a couple of seminars.

Speaking of RV seminars, while our schedule won’t allow us to be at the RVSEF RV Lifestyle, Education and Safety Conference in Bowling Green, Kentucky, June 3-6, Walter Cannon has come up with an excellent RV education program filled with great seminars. There is a 10% discount for anybody registering for the conference before March 1st, so if you plan to attend, register now and save yourself some money on this excellent program.

Thought For The Day – Virtue is the only true nobility.