Yesterday we had a party to celebrate Terry’s dad’s 80th birthday. My father-in-law, Pete Weber, is one of the kindest, nicest, and most loving men I have ever known. Pete is a retired Air Force NCO, and even though he won a battle with cancer a few years ago, nothing slows him down.

He still walks several miles a day, he can do 25 pushups before I could even get down on the floor, and he can outwork most men 30 years younger. In fact, a while back Pete didn’t have enough to do, so he got himself a job as a WalMart greeter, working the graveyard shift four nights a week.

But that wasn’t enough of a challenge, so he volunteered to spend two of his nights retrieving shopping carts from the 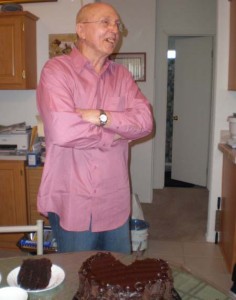 furthest edges of the parking lot! Here’s a picture of the happy birthday boy 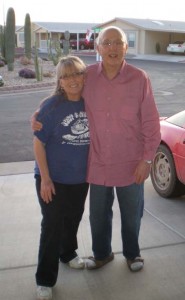 Cody, and their ladies came down from their homes in Colorado, and her son Shawn and his girlfriend arrived from New Mexico, to help Pete celebrate his special day. Here is a picture of Terry and her dad. Can you tell how much she loves him?

That many people demand a lot of food, so Terry, Lisa, Dani, and their mom, Bess, prepared a feast that included Miss Terry’s delicious barbecued smoked ribs, beef sandwiches, all kinds of side dishes, and a huge chocolate cake that would destroy anybody’s diet. We all ate until we couldn’t eat another bite, and then we ate some more!

It was a great day, and everybody had a good time. We stayed until after 9 p.m., and by then everybody’s eyelids were beginning to droop, especially the Colorado contingent, who had to get up at 3 a.m. yesterday morning to be at the airport in Denver in time for their flight. I know Pete really appreciated having so many of his family with him for his birthday.

Friday I put a picture of the grapefruit tree at our RV site in the blog, and longtime reader Dave Burman thought I 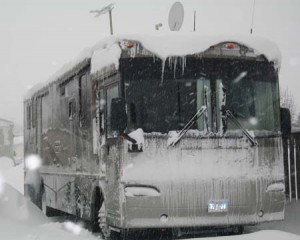 might want to see what life was like in his little corner of the world. Dave and his wife Mary are stuck in Frederick, Maryland, waiting for retirement so they can hit the road next year. Dave said he promised Mary that this will never happen again, and that he will drive their Winnebago Journey to Mexico if necessary, but they will be warm next winter!

I don’t blame you, Dave. We were stuck in Traverse City, Michigan during the wintertime years ago, while Miss Terry was battling cancer, and I don’t think I have completely thawed out yet! Our daughter Tiffany and her family live in Show Low, Arizona, only about a three hour drive from here, and I’d love to be up there spoiling my two granddaughters. But, until it warms up and the snow melts in the high country, that just isn’t going to happen.

Today we’re going back to Terry’s parents’ house to enjoy some more family time, and I bet there are plenty of leftovers we’ll have to wade through. It’s a dirty job, but somebody has to do it!

Thought For The Day – Birthdays are good for you; the more you have the longer you live.

4 Responses to “A Birthday Gathering”