After our long day trip to Yuma on Thursday, we didn’t feel much like going anywhere yesterday, so we spent the day doing administrative tasks. I think the only time either of us went outside was when I carried the trash down to the dumpster.

Now that I had a better idea of the size and layout of the buildings available at the Yuma fairgrounds for our rally, I was able to update and refine the seminar schedule. I posted the updated schedule to the bottom of our rally web page, but there are still some gaps that I need to fill in as other seminars are confirmed. This is still a tentative schedule, and there will no doubt be changes as we get closer to the rally dates.

While I was busy with that, Miss Terry was doing some paperwork, logging in rally reservations, and recording some receipts for expenditures we made recently. When people learn that we are fulltime RVers and that we make our living by writing about our travels, they say that it must be fun having a job that is a permanent vacation. Yes indeed, it is a lot of fun. But it’s not all touring interesting places and sightseeing. There are a lot of days just like yesterday, when we’re sitting at our desks working at mundane tasks. But I still wouldn’t trade it for any other job in the world!

It was just as well, because even though the storm clouds had moved on, yesterday was pretty chilly, and we weren’t too interested in being outside anyway. We hope it eventually warms up enough that we can do some geocaching, or maybe even get our kayaks into the water. 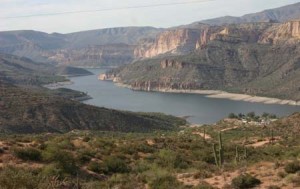 Yes, there is a lot of water in Arizona, from small lakes like Lake Patagonia and White Mountain Lake, scattered all around the state, 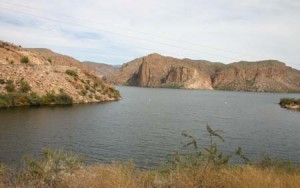 to some huge impoundments like 22 mile long Roosevelt Lake, northeast of Phoenix; or Lake Mead, which stretches for over 110 miles along the Colorado River, in the northwestern corner of the state.

Lately I have been looking at digital camcorders. I don’t need anything professional, but I’d like to experiment with putting some small videos on the blog from time to time. I’ve owned a couple of older style camcorders years ago, but the technology has changed a lot since then. I’ve been doing a little bit of research, and realized that I have a lot to learn, with so many choices and options on the market these days. I’d appreciate feedback from any of you who have camcorders as to what features you like and don’t like about yours.

I have to brag just a bit. A few months ago I collaborated with Christine Pinheiro on a new book titled The Step By Step Guide to Self-Publishing for Profit. Actually, Christine did all of the work, I just gave her some input, and she was kind enough to share credit for the book with me. Our book has won the Allbooks Review Editor’s Choice Award for 2010 in the writing category. I’ve never had one of my books win an award before!

Bad Nick didn’t want to go outside yesterday either, so he stayed in too, and posted a new Bad Nick Blog titled They Should Have Aimed Higher. Check it out and leave a comment.

7 Responses to “An Administrative Day”