Today is a very special day for myself and Miss Terry. It’s our twelfth anniversary, and we still feel (and often act) like newlyweds. This was not the first marriage for either of us, and believe me, it was not something that either one of us was looking for, or expected to happen. But isn’t that the way it sometimes goes? We often find the best things in life when we least expect them.

I’m a very fortunate man to be able to live this dream life that I have, to make a living doing something most people can only dream of, and to be able to share it with my best friend in the world. And tonight I’m taking my best girl out for a nice, romantic dinner. I love you, Terry.

Yesterday, I was sitting at my desk writing when suddenly a volley of gunshots went off right outside our motorhome! That will make your blood pressure shoot way up! I wasn’t sure what was happening, but in today’s world who knows? As it turns out, we didn’t have a crazed mass murderer running wild through the park. It was an America Legion Honor Guard firing a gun salute as part of a memorial service for one of the park’s residents who recently passed away. Geez, they should warn a guy before they do things like that!

Little things like gunplay never bother Miss Terry. She spent part of the day yesterday installing one of the new day/night shades in our bedroom, and discovered that it was more of a job then she had expected. Of course, it didn’t help that the company that supplied the blinds did not send any mounting hardware or installation instructions. But she eventually figured it out. 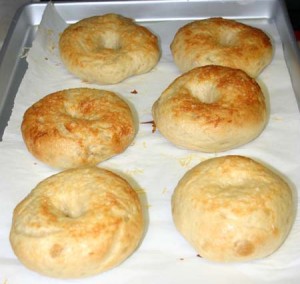 To prove that there isn’t much she can’t do, Terry also decided to make a batch of Asiago cheese bagels. This was only the second time in her life that she had made bagels, and she said her first attempt years ago produced something more akin to hockey pucks than food. But not this time! They turned out yummy!

I received two different e-mails from readers yesterday about the problems they are having securing financing for RVs. One person is a retired Marine officer with excellent credit, and he has been using the same bank for years. They financed his current motorhome, which he has a lot of equity in, and he said his bank was ready to approve the loan on the new unit until they realized that he is a fulltimer, with no “fixed” residence. Then they turned him down.

The other e-mail was from a gentleman who said his credit union would not finance the fifth wheel he and his wife live in fulltime, but they would refinance his truck. As he said, “Go figure – I can drive the truck away easier than pulling away my fifth wheel!”

I have no idea how the bean counters at financial institutions think, or why they make the decisions that they do, but I did recommend that both of these men call Eileen Gilmore at Alliant Credit Union at (773) 462-9642 and tell her I told them to call. After the financial setback we had from Terry’s cancer, and being self-employed fulltimers, even our own bank, that we’ve used for over 25 years, would not talk to us when we were RV shopping.

But, Eileen got us financed in no time at all, because she took the time to listen to us, look at our credit history, and do the extra work to get us taken care of. I don’t get a penny from referring anybody to Eileen, and she is not an advertiser. I just like to help spread the word about good business people who go the extra mile for their customers.

Of course, Bad Nick just likes to spread controversy, so he posted a new Bad Nick Blog titled Can He Walk On Water Too? Check it out and leave a comment.

Thought For The Day – Procrastination is the thief of time.

19 Responses to “A Very Special Day”