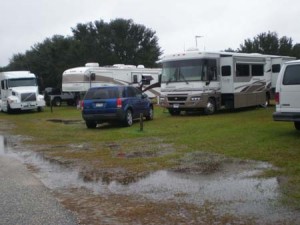 If you see Noah, tell him I’d like to swap a really nice Winnebago 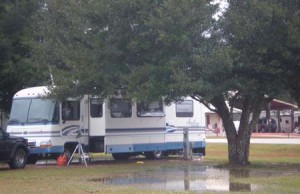 Ultimate Advantage motorhome for his ark!

It has been raining ever since we got back to Summerdale, and I’m starting to collect two of every critter I see, just in case. Here are a couple of photos of the puddles taken from in front of our motorhome yesterday morning. Everywhere we step, the ground is just saturated.

A lot of blog readers have e-mailed asking me how our insurance company is treating us since we were burglarized and vandalized the evening of December 4th. I have held off on saying much, hoping to keep a spirit of cooperation going. But since that hasn’t done us any good, here is how the situation looks from my point of view. Please excuse the rant, but we feel like we are being victimized for a second time.

We have used PoliSeek (formerly AON) as our insurance agent for most of the ten years we have been on the road. First they placed us with Royal Sun Alliance, and when that company stopped covering RVs, they switched us to National Interstate. In all of that time, we have faithfully paid our premiums on time and have never had a claim.

We are supposed to have a disappearing deductible, which means that for every year that we don’t have a claim, our deductible goes down by 10%. We also pay extra for full replacement coverage of our RV and contents.

So far, I am very unhappy with the response from both PoliSeek and National Interstate. Our crime happened late on a Friday evening. We called the next morning (Saturday), and got a message to call back on Monday. So we were left to fend for ourselves all weekend in 12 degree weather in northern Indiana with an RV with a window busted out. We could not leave the RV parked and unsecured and stay in a motel or everything else in it could have been stolen. Fortunately, Michele Henry from Phoenix Commercial Paint opened her shop up for us so we could get in out of the cold over the weekend.

On Monday, three days after the incident, I talked to the first claims adjuster, and he e-mailed me a Vandalism Affidavit and requested that I fill it out, have it notarized, and return it to him by fax. He also said to send him a list of any items that were stolen. I did so, and called him back an hour or so later to tell him that they had been faxed, and got a message that he was out of the office. As it turns out, he was out of the office for the next week.

We managed to contact a different adjuster, who said she was filling in for him, and she asked me to mail her hard copies of the forms, which we did. When I asked her about specific repairs and what was covered and how to get the repairs done so we could get back on the road and to warmer weather to avoid an incoming blizzard, her answer to every question was “I don’t know, I’ll have to get back to you.” The shop that did the initial repairs so we could get out of cold, snowy Indiana is getting the same run around.

Once our motorhome was drivable again, the second adjuster said to go to Camping World in Robertsdale, Alabama to get an estimate for the repairs that are still needed. I did so and faxed National Interstate that information.

Monday, a week after I spoke to him, the first adjuster called back and wants to start from square one all over again, and when I asked about the repairs still needed, his answer was the standard “I don’t know, I’ll have to get back to you.”

I was told that our disappearing deductible does not apply, because we also kept our bus conversion insured with them until it was sold. As for our total replacement coverage, that apparently only applies to items not physically attached to the RV, and guess what, there’s another deductible that comes into play there too!  When I ask why, the answer is “I don’t know, I’ll have to get back to you.”

Yesterday I called PoliSeek, who is supposed to be my advocate, as I understand it. I was told that nobody there could help me, and was transferred to the original claims adjuster at National Interstate. He told me that “these things take time.”

How much time? It is now twelve days after we were victimized and we still do not know if we are on the hook for the repairs to our RV or if we will be reimbursed for our loss and damages. The shop in Indiana wants paid and has told us that if the insurance company does not pay them in a timely manner for the repairs, we are responsible.

The same claims adjuster called back later yesterday afternoon and told me the claim can take up to 180 days to settle. Then he e-mailed me more paperwork to fill out, more loss claims to have notarized and mailed in, and said he will turn it over to a field adjuster, who is supposed to contact us “soon” to make an appointment to come and talk to us.

You can bet that I’ll be changing insurance companies and agents very soon! Some readers who use PoliSeek and National Interstate have reported good experiences with them, but they have totally dropped the ball on our claim, in my opinion.