For the most part the RV lifestyle is extremely safe, especially in terms of personal safety. I have always told new RVers that they have more to fear from an RV fire, or the idiot coming at them at 60 miles an hour riding three tons of steel, than they do from a criminal. An incident last night has proven to me just how wrong I have been.

We have been parked at an RV repair facility in Elkhart, Indiana having some repairs and upgrades done to our motorhome. Yesterday afternoon we picked up the fellow who flew in from California to buy our bus, and a friend who came to help him drive it back, at the airport in South Bend.

By the time we drove back to Elkhart, showed them the bus, got them checked into a hotel, and took them to dinner, it was almost 9 p.m. when we drove back to the repair shop, where our motorhome was parked in their small camping area. It’s a pretty dark place, and ours was the only occupied RV there. As we arrived, Terry said “Someone broke into our rig!” Sure enough, there was a softball sized hole in the door window. As I got out of the van and went up to the RV, Terry yelled “He’s still inside!” and I found myself face to face with a husky young black man coming out the door.

Now, I have been in the military, saw combat, I was a firearms instructor, a cop, have owned and carried a handgun most of my adult life, and have concealed weapons permits from two different states. But this lifestyle has made me complacent, and I seldom carry on a regular basis. And, when going to an airport, that is a big No No. So I wasn’t armed.

Our burglar, on the other hand, was armed with one of my own handguns, and as I yelled at him to show me his hands, 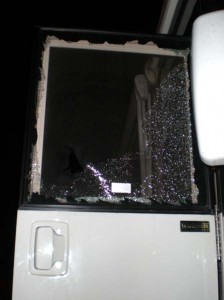 he raised one of my Glock 9mm pistols toward us. The smart thing to do when we first spotted the broken window was to back off and call the police, but this all happened in a matter of seconds.

When I saw the gun in his hand, my only thought was to keep him from using it, so I slammed the door shut on his hand, with him inside the RV and me outside, and then slammed it a second (and maybe third time), shattering the rest of the glass in the door. He dropped the gun, then ran past me to get away as I recovered the weapon. My first thought was to shoot him as he fled, but I’m not going to kill anybody for a few material possessions, and the threat to us was over.

Meanwhile, Terry was in the van and on the phone talking to the 911 operator, and I stayed outside, because I didn’t know if there was anybody else inside the RV, and I have other firearms on board. Terry handed the phone out the window to me because the operator wanted to talk to me, and about then I saw the same guy poking his head around the corner of the building. Not knowing if he was armed, I pointed my pistol at him and told him if he took one step toward us I was going to kill him. Fortunately for both of us, he backed off and ran away.

The police used a dog to track him from the RV around the building to where he came back, and then off to a service road, where the scent disappeared. He must have had an accomplice who fled when we pulled into the parking lot, because he appeared empty handed when he ran, but we are missing a flat screen LCD TV, netbook computer, my Seiko wristwatch, the cable for my Silverleaf engine monitor (which was plugged into the computer), and we won’t know what else until we take a total inventory.

Inside, the motorhome, there was a big pile of things in the entryway, including a couple of handguns, our Wii, DVD player, digital SLR camera and other stuff he had ready to take when we interrupted him. 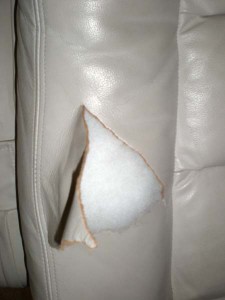 He, or they, also trashed our RV. There is broken glass everywhere, they cut a big triangle into the driver’s seat and pulled out part of the stuffing, ripped down the day/night shades in the bedroom, and threw stuff everywhere as they ransacked the place. The police dusted for fingerprints, and left a mess of stubborn black powder that is almost impossible to clean up.

But at least nobody got hurt. We are shaken, we feel totally violated, and I’m pissed off, both at the thief or thieves, and at myself. If they had to steal something because they are too damned lazy to work, okay, do it. But why vandalize our home in the process?

As for myself, I have become complacent in this lifestyle, and I let my guard down. Getting ripped off is one thing; almost getting shot with my own gun is unacceptable. You can bet that the next time I leave my motorhome, I’ll have more than my empty hand to point at whomever might be waiting for me when I come back home!

With the window busted out and temperatures down in the 20s overnight, there was no way we could stay there, and we were not about to anyway, in case they came back. I called our friend Michele Henry from Phoenix Commercial Paint and explained our plight, and even though it was late at night, Michele came back to the shop and opened it up so we could pull the motorhome inside and stay out of the worst of the weather until we can start dealing with things Monday morning. In the meantime, we are safe, and just coming down off the adrenalin high the incident gave us.

Thought For The Day – Count not what is lost, but what is left.

66 Responses to “A Violent Encounter”