After getting a clean bill of health from my new doctor at the V.A. hospital in Lexington, Kentucky on Monday morning, we returned to the Mercer County Fairgrounds that afternoon to wrap up some business and do some exploring in the area.

We love small towns, and Ohio has many charming little communities to choose from. Greenville, located about 30 miles south of Celina on U.S. Highway 127, is a friendly community with a lot of history, and one of the best small town museums we have ever found. 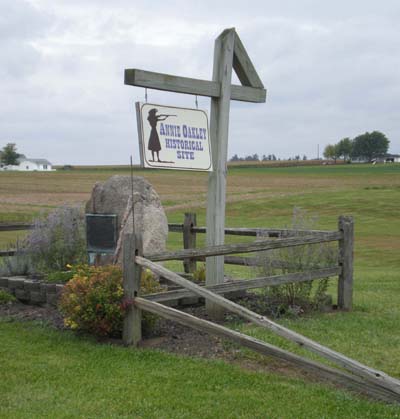 Midway between the two towns, the small hamlet of North Star consists of a post office, a couple of stores, a farm implement dealer, and a smattering of houses.

But North Star has a special claim to fame; Annie Oakley. America’s most celebrated female marksman was raised here, and learned to handle a rifle shooting small game to help feed her impoverished family. By the time she was seven years old, she was an accomplished hunter and trapper, even selling her excess game to a store in Greenville. A small roadside monument honors the girl sharpshooter at the site of the home she lived in. Annie Oakley is buried in a small cemetery just off Highway 127, a couple of miles from her girlhood home.

Greenville remembers Darke County’s favorite daughter with a statue of Annie Oakley downtown, as well as a two room exhibit in the fabulous Garst Museum.

We have visited many small town museums over the years, and I can’t remember one that impressed us more than the Garst Museum. Besides Annie Oakley, the museum has an extensive exhibit on another local celebrity, Lowell Thomas, one of the best known writers and filmmakers of the 20th Century. Other exhibits include Native Americans, military history, a re-created small town made up of storefronts from everything from a dentist’s office to a toy store, and an outstanding display of Currier and Ives prints. 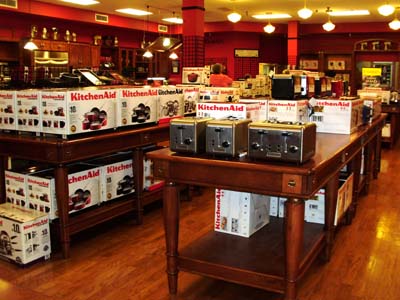 Greenville is also the home of the Kitchen Aid company, and visitors can tour their factory on the north side of town. On the town’s main street, the Kitchen Aid Experience Center is housed in an old department store, and visitors can see and try out a nice selection of small appliances, and shop for bargains on mixers, toasters, blenders, and accessories. Being an accomplished chef, Miss Terry loves this place, and whenever we’re in the area she stops in to drool over the goodies.

Besides lots to see and do, Greenville has some of the friendliest people we’ve met anywhere. Everybody we talked to treated us like next door neighbors and friends. When you get away from the big cities and the Interstate highways, and get out on the two lanes roads, you’ll discover the real America, in places like Greenville, where the heart and soul of our country lives.

We had originally planned to cover some stories in eastern Ohio in the next few days, but the weather is not cooperating, so we are undecided about our next move. We need to get back to Elkhart to get the new issue of the Gypsy Journal in production, so we may head in that direction and hit some locations between here and there instead.

We’re enjoying the fact that we don’t have to be anyplace and have no commitments until our Arizona Gypsy Gathering rally in March! We’re finally getting some of that freedom that the fulltime RV lifestyle is all about!

Quite a few people have written to ask when Bad Nick will be posting a new blog. The little imp has been taking a hiatus while all of the Ohio rally activities were going on, but I have it on good authority that he’ll be posting something any day now, and he’s got lots to say!

Thought For The Day – If a turtle doesn’t have a shell, is he homeless or naked?