I was listening to one of comedian Jeff Foxworthy’s segments on Blue Collar Radio on Sirius yesterday, and he said comedians don’t have to make up jokes, all they have to do is look around them and write down what they see. I agree completely.

We have seen so much insanity and nonsense just going about our day that it would make great stand up material. And what we don’t see, our readers share with us.

Take, for example, this photo I received yesterday from Gypsy Journal readers Dennis and Donna 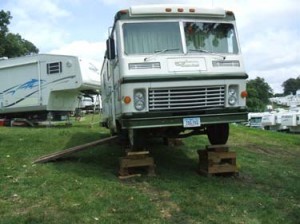 Miller. They spotted this while vending at the Iowa State Fair. Now, that’s Redneck Engineering if I ever saw it. 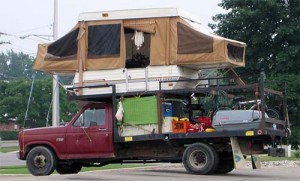 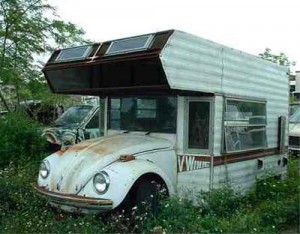 I think the bus conversion crowd, of which we were a part for many years, has some of the finest (or worst) examples of ingenuity I have ever seen. While there are many, many well planned and well built bus conversions out there, we have seen some that left us scratching our heads and saying “huh?”

One such rig that comes to mind was a fellow with an MCI 8 like ours that we ran into at Elkhart Campground. He couldn’t wait to show me his water tank system. Instead of installing his fresh water tank in his rear bay, like 99.9% of bus converters do, he had mounted a group of large diameter PVC pipes, capped on each end, on the roof of his bus. He had them plumbed together and a green garden hose going down the side of his bus and into a hole he had drilled in the side.

He explained that this way, he didn’t have to buy a fresh water tank, he had more bay space available, and it was gravity fed, so he didn’t have to buy a water pump. And because he had painted the tubes black, they absorbed the sun’s heat, and he didn’t need a water heater! Sure, he had to crawl up a ladder with a hose to fill his “tanks,” and sure he was a little top heavy, but think of the money he saved!

We have also gotten some laughs at the way people handle walking their dogs in RV parks. In Crystal River, Florida, we saw a gentleman who had trained his dog not to go potty until he put a paper towel under its rear end. Once he did, the dog squatted, did its business, and the man picked up the towel by the corners and deposited it in the trash.

Another fellow carried a wooden pole with a small shovel looking device on it, and his dog was trained to deposit only onto the shovel blade, making cleanup quick and easy. Well, except for that crappy shovel he had to stick in his RV’s bay.

What dog obedience school did these folks take their pets to? It’s only been in the last year or so that Miss Terry taught me to go inside when nature calls, instead of heading for the nearest tree. I’m glad she did, because we were in the desert at the time, and the nearest tree was 150 miles away!

Thought For The Day – If the shoe fits……buy it in every color.

8 Responses to “It’s Everywhere You Look”