This is our third stay Fisherman’s Landing Marina and Campground, which is owned by the City of Muskegon, Michigan. Overall, we really like it, because it is a comfortable campground and is only a mile or two from my cousin Berni Frees and her husband Rocky’s place, which makes visiting convenient.

I really wish they had a weekly rate, because we’d visit more often, and stay longer. The daily rate is $25 for a back in site with 30 amp electricity and water, and our site also has a picnic table and cement slab.

While they don’t have a weekly rate, they do offer a monthly rate of $500, which is too steep for our budget, especially for a site with no sewer, just a dump station at the exit from the marina. $300 a month I could understand, but not $500. They do offer a Passport America discount for two nights at half price out of any 30 day period.

The only problem I have with the place, and it is a problem that may well play into our decision whether or not to return to Fisherman’s Landing, is that on two out of our three visits, groups of rowdy tent campers were raising hell into the wee hours of the morning. I don’t mind folks having a good time, but when people are hooting and hollering and playing loud music at 3 or 4 a.m., as they were Saturday night, that’s too much.

When this happened on a previous visit, the manager said she was away from the campground overnight, or she would have done something about it. I don’t know what the excuse is this time around, but I know that the folks in one RV parked near us left Sunday morning because of the noise and foul language. They had told me the day before that they were thinking of extending their stay for a few days because they liked the community so much.

If the folks in charge want to attract family campers and have them return, and if they want them to have a good impression of Muskegon, they need to monitor the party animals that are running good customers away. The Elks lodge in Muskegon has a campground with RV sites for $21 a night, and I was told they have a $300 monthly rate.  I think we’ll stay there on our next visit, so we can get some sleep. 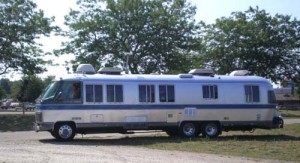 I’m always on the lookout for interesting RVs, and when I spotted this old Airstream motorhome parked next to us at Fisherman’s Landing, I had to take a photograph. I have a soft spot in my heart for Airstream travel trailers, and though I have never been inside one of the motorhomes, I really like their classic looks.

Yesterday was the 57th wedding anniversary for Rocky’s parents, and we were invited to take part in a family dinner Berni and Rocky were holding for them. We didn’t want to intrude, but everybody insisted we join in, so we did. Berni grilled some delicious steaks, Miss Terry made an awesome triple berry pie and her yummy homemade yeast rolls, and we all gorged ourselves. Wow, 57 years! That’s a real achievement! Congratulations!

Thought For The Day – Urban sprawl is when they cut down all the trees and name the streets after them.