Muskegon, Michigan is located on the shore of mighty Lake Michigan, and the city’s history and personality were greatly influenced by its maritime heritage. Even though it is not as busy at it once was, the waterfront is still a busy place, though these days the pleasure boats far outnumber the working vessels.

In addition to the big lake, the area includes several smaller lakes and the Muskegon River, so everywhere you look there are people in fishing boats, sailboats, canoes, kayaks, jet skies and every other imaginable type of watercraft, as well as several I have never seen before.

Several retired historic ships are berthed in Muskegon, including the USS Silversides, one of the most 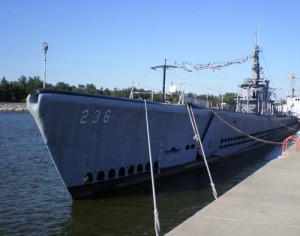 famous World War II submarines, which we visited at the Great Lakes Navel Memorial and Museum and featured in the November-December 2008 issue of the Gypsy Journal. Also at the museum and featured 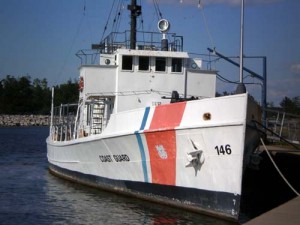 in that issue, is the U.S. Coast Guard Cutter McLane, which saw service chasing whiskey smugglers during Prohibition, and Japanese submarines during World War II.

On this trip to Muskegon we toured another historic World War II veteran, the LST 393, one of only two World War II LSTs still in existence. The official designation for this type of vessel is Landing Ship 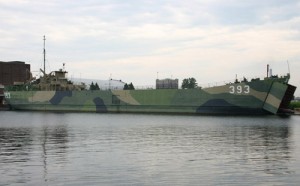 Tank, because they were designed to carry tanks, trucks and other heavy equipment right to a beachhead, though their crews referred to them as Large Slow Targets. LST 393 made 30 round trips to Omaha Beach during the D Day invasion, and landed 3,248 vehicles during her wartime service. We’ll have a feature story on this historic ship in our next issue.

Docked right behind LST 393 is the cargo ship Paul H. Townsend, which spent the last fifty years carrying concrete from Duluth, Minnesota to Great Lakes ports. Built near the end of World War II, the ship is 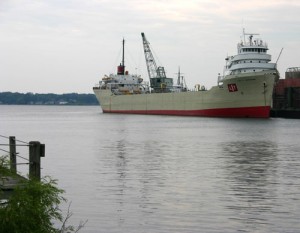 currently used for concrete storage, because it is cheaper to move cement with barges powered by a tug boat. We were talking to a gentleman at the dock who told us that the ship is still commissioned and can be made ready to sail within a matter of days. Meanwhile, he said, Inland Lakes Management, Inc., the company responsible for the ship, pays a watchman $300 a day to live aboard the Townsend to protect it from vandals or burglars. If I ever stop traveling, I want a job like that!

Seeing so much activity on the water had us eager to get our kayaks wet, so yesterday we introduced my cousin Berni Frees and her husband Rocky to paddling. They rented a couple of kayaks, we hauled 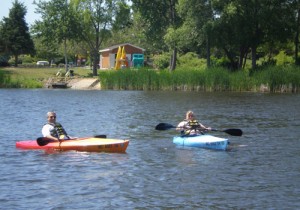 ours out of the van, and off we went up the Muskegon River. Rocky and Berni both took to kayaking like ducks to water, and we had a wonderful time. Here is a pictures of Rocky and Berni enjoying their first paddling adventure.

Since it was their first time paddling, we didn’t make a long excursion, but in the couple of hours we were on the water we probably covered a little over three miles.

Until now, Terry and I have only paddled in the Florida Keys and the Gulf of Mexico at Aransas Pass, Texas. We learned that paddling a river is much different. Going downstream with the current is pretty easy to do, but fighting our way back upstream against the current our last half mile or so was hard work! We all had sore muscles by the time we pulled the boats out of the water, but all four of us were already talking about our next expedition!

Thought For The Day – Love, not time, heals all wounds.