Yesterday started out as a frustrating day.

In Sunday’s blog I wrote that when we bought fuel at the Paso Junction Sinclair truck stop in Pratt, Kansas they triple charged my debit card for over $472 in false charges. I called my bank and they reversed the charges, but Monday night they were back and the money was out of my account. After repeated calls to the bank and the truck stop, which acknowledges that the problem is on their end, now they tell me it could be up to 35 days before it is resolved!

I wanted to get an early start on the road yesterday morning, but instead had to run around finding a place to send out faxes of my receipts and the false charges on my account to both the truck stop’s manager and to my bank.

$21 in fax charges later, we finally got out of town only to get held up in a massive traffic jam caused by an accident just before the junction of Interstate 470 and Interstate 70. Why are drivers so dumb?  We were sitting still as emergency vehicles tried to squeeze past to get to the accident scene, and the cars would not move over to let them pass. Finally we got past the accident scene and got onto Interstate 70 for the short drive to the fairgrounds in Higginsville. We were greeted by George and Starr Sharrer, who have been parked here for a week in their fifth wheel. Soon afterward, Jim and Chris Guld from Geeks on Tour pulled in. 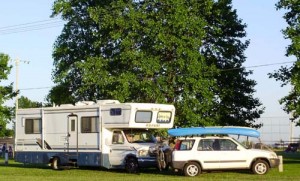 This is typical of the many fairgrounds around the country that RVers can take advantage of for low cost parking. For $10 a night we are getting 30 amp electric, water, and a dump station. What a deal! Here is a picture of the Geek’s motorhome at the fairgrounds, and another of our bus. If you have not checked out the many low cost 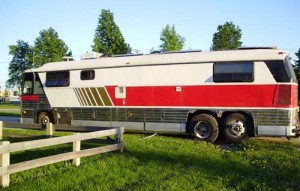 camping opportunities in this country, order our Special 7 in 1 CD, which includes over 1,000 free campgrounds, fairgrounds with RV parking, casinos that welcome RVers with free camping, public RV dump stations, RV Good Guys, and more. It will save you a bundle.

Once Jim and Chris were parked, it was time to eat. We had dinner at Zybisco’s Bar and Grill, where it was Taco Tuesday, with three for $1.50. Terry said they were great. I had a huge one pound double bacon cheeseburger that even I could not finish! Terry pointed out the weight to me on the menu, but I was busy talking and didn’t hear her. Big mistake! It was yummy, but way too much for one guy to eat alone.

Of course, I had to save room for dessert. We walked a couple of blocks down Higginsville’s Main Street to Sweetz, where owner Jeni Bayens fixed us up with ice cream and other goodies. Before seeing the error of her ways, Jeni was a nutritionist. Now she’s hustling ice cream and chocolate covered strawberries. Personally, I think it was a great career choice. 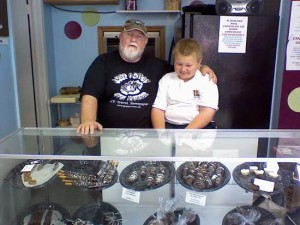 Jeni’s 10 year old son Casey was a cool kid that I enjoyed visiting with. I didn’t know I could have loaner kids all over the country like I do loaner dogs. Why didn’t anybody ever tell me that? I could have saved a ton of money on child support!

Thought For The Day – Life is like a roll of toilet paper. The closer it gets to the end, the faster it goes.