We spent yesterday exploring cowboy country. Back in the years following the Civil War, western Kansas was the Wild West, and it was here that some of the best known characters of the time made names for themselves.

Meade, Kansas, where we are staying at the city park’s free “Tourist Camp” is the home of the Dalton Gang Hideout, complete with an escape tunnel that led from the outlaw gang’s sister’s house to a barn 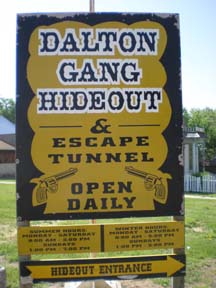 down the hill.  Marc Ferguson, manager of the Hideout, had invited us to come by and check it out.

Marc is a great storyteller, and he gave us a brief history of the Dalton brothers and their fall from grace, starting out as Deputy U.S. Marshal’s and ending up shot down in the streets of Coffeyville, Kansas in a bank robbery gone bad.

We were impressed with the tunnel, and displays in the neat little museum upstairs of the gift shop, which included everything from old guns and barbed wire to a stuffed two-headed calf.

We left the bus in Meade and drove the van about 40 miles to Dodge City, which was known as the Queen of the Cow Towns and one of the wickedest towns on earth. It was here that cattle drives from Texas reached trail’s end, and an army of saloon keepers, card sharks, shady ladies, and outlaws waited to separate the hardworking Texas cowboys from their pay.

Killings were routine business in old Dodge City, and it took hard lawmen like Bill Tilghman, Wyatt Earp and Bat Masterson to bring peace. Plenty of outlaws and wild cowboys found their final resting place at Boot Hill, and the legends have only grown over the years.

Today Dodge City is a friendly town of some 25,000 people, and still makes its living off the cattle industry. Two large meat packing plants are the main employers, though tourism plays an important role in the local economy. 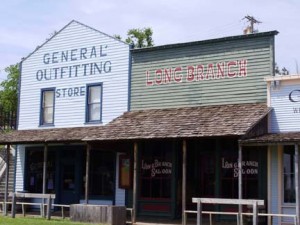 Jan Stevens, director of the Dodge City Convention and Visitors Bureau, met us and took us to lunch, while she gave us a very good overview of the town’s history and how things are today. We deal with a lot of public relations and media representatives in our work, and I have to tell you, if they were all half as good as Jan, we’d have an easy job. She spent a long time with us, answered all of our questions, gave us a ton of excellent reference material, and then arranged a tour of Boot Hill and the re-created Front Street, once the centerpiece of the wild cow town.

Jan also arranged for local historian Charlie Meade to give us a walking tour of Dodge City, which included all of the historically important places, as well as this neat statue of Wyatt Earp. 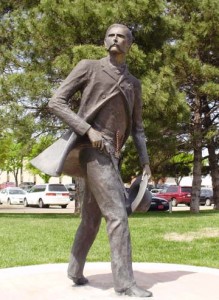 Charlie is a real treasure, and it was wonderful to spend the afternoon with him. A retired Deputy Marshal, and recently appointed as a Special Deputy United States Marshal, at 74 years young, Charlie is a walking encyclopedia of Old West history and lore.

We were great friends by the end of our time together, and Miss 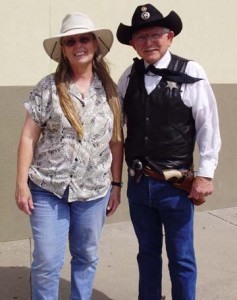 Terry posed for a picture with our new pal. Charlie was only too happy to do so, saying he never passes up an opportunity to get close to a pretty lady. I can’t say that I blame him.

Thought For The Day – I suffer occasional delusions of adequacy.