We spent Saturday relaxing at Ray Behrens Corps of Engineers Campground. At least I did. Poor Miss Terry had several loads of laundry to catch up on, as well as cleaning up all of the mud and dirt tracked in during the Escapade at Sedalia.

I had a backlog of e-mail to catch up on, and worked my way through that, then entered some new subscriptions that had come in during the rally. We have very poor Verizon service on our cell phones and air card, only 1X Extended Network instead of the much faster EVDO service we get in most places.

We can get online and make calls, but we have to be patient to do so. I did a speed test, and our download speed is only 66 kbs, while upload is 28 kbs. That’s a little better then the dismal service we had in Kingman, Arizona back in March, but nowhere near the 1500 to 2200 kbs we had in Apache Junction and other places around the country. 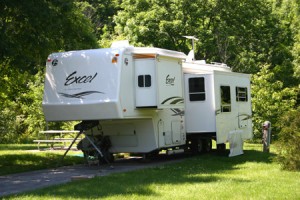 If you have not been to a Corps of Engineers campground before, you have no idea what you are missing. They are some of the best values in the RV world. Our site at Ray Behrens Campground on Mark Twain Lake is typical of the other Corps parks we have visited, with the added plus of a full hookup site, which not all Corps campgrounds have. But every one we have visited has had huge sites, is super clean, and at a great price.

As these photos I took yesterday show, there is room for any size RV. With our 40 foot MCI bus conversion and extended length Ford cargo van in our paved

site, we could still park another full size car or truck. We have neighbors in everything from tents to fifth wheel trailers, and lots of room between the sites so we don’t feel cramped. The restrooms are clean and the grass is carefully trimmed.

Yesterday, longtime Gypsy Journal readers Joy and Phil Brown stopped by to visit. They are in the area doing genealogical research, which is one of Joy’s passions, and it was nice to see them. Be sure to check out their Backroad Chronicles blog.

Also yesterday, our friends Bob and Molly Pinner pulled into the site across from us in their beautiful Monaco Dynasty motorhome, and we had a nice visit with them. Bob and Molly are a wonderful couple we have enjoyed meeting up with at our Gypsy Gathering rallies and other RV events across the country. Bob and Molly share their traveling adventures in their excellent Moon River And We blog.

Speaking of Gypsy Gathering rallies, several people have been asking me if Chris and Jim Guld of Geeks on Tour would be putting on their Computer Boot Camp at our Ohio Gypsy Gathering rally in September. I have confirmed with Chris that they are going to hold the Boot Camp, so visit their website or send them an e-mail for more details.

At last year’s rally the Boot Camp was so successful that they repeated it a second time. Miss Terry participated in the second session the Boot Camp, at the end of the rally, and learned a tremendous amount about how to get the most out of her computer.

Thought For The Day – The aging process could be slowed down dramatically if it had to work its way through Congress.

5 Responses to “Corps Of Engineers Campgrounds”