A few days ago I posted a blog with photos of RVs damaged by a tornado that hit the NACO Natchez Trace campground near Hohenwald, Tennessee. That wasn’t Mother Nature’s only assault on the RV world lately.

On Friday another nasty storm, accompanied by a tornado, tore through Saint Francois State Park near 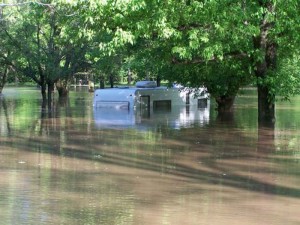 Bonne Terre, Missouri, where our friends Ron and Brenda Speidel are camp hosts. Brenda said they had five inches of rain, and they had a hectic time evacuating people to storm shelters. She told me it was one of the most frightening experiences she has ever had.

Not much rattles my pal Ron, who has pretty much 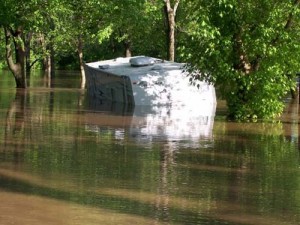 seen it all in his career as a police officer and police chief, but he said it was bad enough that he felt much better inside the storm shelter.

Fortunately for our friends, their beautiful Winnebago diesel pusher was parked on high ground, but nine visitors’ RVs were flooded out, and six of them were totaled.

We’re keeping our fingers crossed that we’ll have good weather during our trip east this week, and while we’re at Escapade in Sedalia, Missouri. One reason we are giving ourselves over a week to travel the 1200 miles to Sedalia is to give us the leeway to hunker down and wait out any storms that lay in our travel path.

Our old MCI bus conversion came from the factory with just basic gauges – speedometer, air pressure gauge, oil pressure and temperature gauges, and battery gauge. I quickly got tired of using a wooden dowel rod to check my fuel level, so one of our first priorities was to add a fuel gauge. One gauge I really wish we had was a tachometer.

At a bus rally last October I managed to pick up a digital tachometer for the bus, but the darned thing did not come with a mounting bracket. After looking at 4×4 and marine shops all over the country from the Florida Keys to Arizona, yesterday we went to Lowe’s here in Show Low and Miss Terry managed to come up with a couple of items that we could combine to create a makeshift mount.

That all came together fine, but when I hooked it up, the darned tach turned out to be dead! With power and a ground connected, we should have a reading of all zeroes with the engine off, but there is nothing. I checked the power going in, and it is good, so all I can figure out is that something must be bad inside the gauge itself.

As many of you know, we have decided it is time to upgrade from our bus to something bit newer and with a slide so we’ll have some room when the grandkids come to visit. Yes, I know it will be quite a change for us from a bus to a production built motorhome, but we’re ready. Several people have sent us information on used diesel pushers, and while we appreciate that, many have been way out of our price range.

We’re looking for a 38 to 40 foot diesel pusher with at least a living room slide, a minimum of a 300 horsepower engine, and somewhere in the $50K to $70K price range. Some of the brands and models we have looked at and liked include Winnebago, Newmar, Holiday Rambler, and Allegro. While we are not fans of Fleetwood, we have seen a couple of nice American Dream and American Tradition coaches we liked. We would prefer to buy from a private party instead of a dealership, but we would not rule that out.

If you know of something that fits into the above criteria that might meet our needs, I’d appreciate you sending me a quick e-mail. Maybe you have a friend who is thinking about trading their coach in and not getting anywhere with the dealers on a trade-in basis. If so, send them my way.

Thought For The Day – Don’t argue with an idiot; people watching may not be able to tell who is who.